Princess and later queen of Shadizar

Help Conan to stop her aunt Taramis from taking over the kingdom and killing her.

Monarch
Princess Jehnna is one of the main protagonists in the 1984 fantasy film, Conan the Destroyer. She is the princess and later queen of the city of Shadizar and a niece of Queen Taramis.

She is portrayed by Olivia d'Abo.

When Jehnna was a young age, she is being cared for by her aunt, Queen Taramis. For it would shown she has would be told of her destined birthright that she as a special child with a unique birthmark to find a special jewel that only she can touch and with it obtain the jeweled horn of the dreaming god, Dagoth. For the days of her life as a princess, she has given many riches and treasures that led her sustaining a comfortable life, although she was highly dependent on Bombaata, who is captain of the guards of Shatazzar. While she has would sometimes have nightmares of the task waiting for her.

Jehnna's pursuit began with the moment she met Conan and his companion Malak. Queen Taramis appointed Bombaata to protect her niece and let her return to her safely, so that when she completes her goal, she will be prepared to sacrifice this girl to awaken their God. Jehnna didn't know that her death would trigger a great fear of the ancient world. Once the task was completed, she did not know the task of Bombaata killing Conan. When they started their journey, Conan sought the help of his friend, a wizard named Akiro, who saved from a cannibal tribe who was about to eat him to absorb his magical power. On the way, they also met Zula, a powerful warrior and a robber. She was not tortured when she and a group of villagers tried to raid by other robbers. She joined the pursuit of Conan to save lives. They found the icy castle leading to the wizard, Toth-Amon on the lake.

However, when they camped, the dark wizard turned into a smog and took Jehnna at night. When the traveler enters the castle, Conan can defeat the wizard, destroy the illusion and prompt them to flee the castle. With the gems in their hands, they began to walk towards the place where the horns were hidden. On the night of the group's break, Jehnna expressed a romantic interest in Conan, but he refused to call her Valeria. This seemed to anger the young princess to get his attention, and Jehnna asked Zula to teach her how to fight because she thought that Conan only wanted strong women, but it didn't help. The next day, they went to an ancient temple, using the power of jewelry, Jehnna was able to find and obtain the horn. The guardian of the horn attacked the group and they managed to slip out of the back door.

Bombaata, who had not killed Conan before, blocked their exit and took Jehnna away, after other people fled back to Shadizar and found their way, because the secret route Malak's sister's cousin's brother (or brother's cousin's sister) used to escape imprisonment. At the same time, the princess is preparing to wake up their gods before the end of the night. They are faced Bombaata, Conan defeated him in the battle and killed him. At the same time, Jehnna is ready to sacrifice and put the horn on the head of the Dagoth statue. When they showed their first signs of life, they tried to sacrifice Jehnna, but Zula first intervened and killed the priest. After receiving an undue sacrifice, the statue began to distort and twist into a demonic look. As still trying to get this creature to accept Jehnna's life, Queen Taramis was died in the chaos, while Conan fight against the beast and eventually killed it by removing the horn from the head and stabbing the sword into the skull of the monster.

After the battle, the newly crowned Queen Jehnna provided a place for each of her companions in her new court. Zula became the new captain of the guard, because Jenna did not see any reason why women could not do as well as any man. Akiro became her new wise men and consultants, and Malak moved forward and almost stumbled, almost surpassing his qualifications and becoming the position of the court clown. Continuing her strong affection for the Cimmerian warrior, she provided Conan with a place as her husband and Shatazzar's ruler, but Conan refused to state that he wished to find his own kingdom and his own queen. A heartbroken Queen Jehnna kissed him goodbye and allowed him to leave to find his own kingdom.

Jehnna is a very pretty but spoiled girl. With medium-long flowing blonde hair, fair skin, and blue eyes, her youthful beauty was a very seductive temptation to all men and Queen Taramis knew this by telling Bombaata, captain of the guards to protect both her and her innocence when it came for her to begin her journey outside of the Castle walls. She is usually dressed in attire that was slighty revealing, probably due to Shatazzar's fashion appeal which revealed a mature look to her body that added to this sexual innocence. 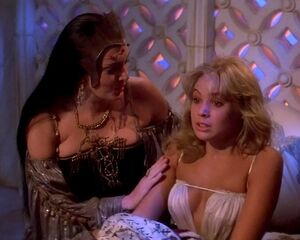 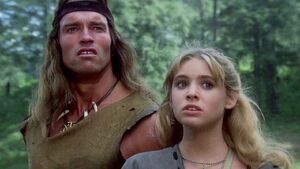 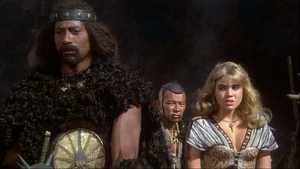 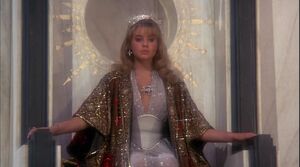