Superhero Monarch
Princess Kara Thornton is the main character in the 2015 animated film, Barbie in Princess Power. She is a modern princess who wished to do more important things for her kingdom, and one day is kissed by a magical butterfly. She soon realized that the kiss gave her super powers, and she developed a secret crime-fighting alter ego named Super Sparkle. Kara's jealous cousin, Princess Corinne forced the magical butterfly into kissing her and became Kara's superhero nemesis, Dark Sparkle, but they had to be able to put aside their differences and work together when they discovered the kingdom's true enemy.

She is played by Barbie and voiced by Kelly Sheridan.

Princess Kara gets into an accident while using a flying machine created by her friends, Madison and Makayla, after she finds the perfect spot in Windemere for her community garden project. Kara's protective parents warn her that the kingdom is more dangerous than she realizes, a sentiment that is shared by their advisor, Baron von Ravendale

The Baron makes his frog Bruce track down ingredients for the potion while he does his usual activities. Kara herself gains super powers when she is kissed by a magical butterfly. She discovers her powers the next day, and she tells Madison and Makayla about it. Kara finds out that she can fly, has super strength, improved agility, and she realises that it was the butterfly who gave her powers. Madison and Makayla tell Kara she can only use her powers to help others, not for personal gain.

While Kara would like to start her community garden project, she knows her parents would disprove. She assumes a super heroine alter-ego named Super Sparkle, and her friends design her a costume. At a construction site, Super Sparkle rescues her cousin Corinne, a construction worker, and reporter Wes Rivers from being hurt. She then realizes that she forget about a royal reception, and rushes back. The Baron sees Super Sparkle in action and wonders how she got her powers, but focuses on getting the remaining ingredients that he needs.

Back in her bedroom, Kara tells Madison and Makayla that she could rescue people and capture criminals with her powers. They reveal that they have created a secret base to help her find emergencies. Kara prevents a robbery and the Baron finds the last ingredient for the elixir. Kara's sisters Zooey and Gabby tell her that they would like to meet Super Sparkle, and suggest inviting her to Kara's birthday party next week. Kara goes to save someone from a fire, and takes a photo with Wes, who has done a lot of reporting on her since she began being a super heroine.

On her birthday, Kara sees that she has many fan sites and a tribute music video. At the party, Kara's cousin Corinne says she thinks Super Sparkle is overrated, but the king and queen express gratitude towards Super Sparkle helping people in the kingdom. Kara leaves to stop another robbery, and Madison and Makayla distract her parents until she gets back. Without realizing, Kara drops her ring, which Madison and Makayla created to have superhero tools.

Corinne sees Super Sparkle change back to Kara, making her the only person besides Madison and Makayla to know Super Sparkle's real identity. She overhears them say that the butterfly gave Kara powers, so Corinne tracks the butterfly down and receives a kiss. She gets super powers and creates a super heroine alter-ego named Dark Sparkle. Wes finds Kara's ring, and the Baron finds his last ingredient. Super Sparkle and Dark Sparkle meet and become rivals.

Wes sees photos of Kara and Super Sparkle wearing the same ring, so he exposes her identity on his blog. Her parents forbid her from acting as Super Sparkle, and the Baron doubles the ingredients to intensify his potion's powers. He says to Bruce that he will rid the realm of its King and put an end to Super Sparkle and Dark Sparkle. He drinks the elixir, finally gets super powers, and tries to attack the king. Corinne uses her powers to save him, so her family finds out she is Dark Sparkle. Meanwhile, Kara's pets, Parker and Newton, try to help stop the Baron, and find the butterfly, so they get super powers too.

The Baron tries to attack Kara's family at a stronghold they are in for protection, but it can withstand any assault. Super Sparkle flies at him to attack, but he snatches her by her cape. She takes off the cape and flies away. The Baron incinerates the cape. Super Sparkle fires more orbs at the Baron, who dodges them. He goes to Mount Dormant, a volcano, and causes lava to flow towards Windemere. Dark Sparkle helps Super Sparkle to divert the lava to a lake. Parker and Newton help Dark Sparkle and Super Sparkle to stop Bruce and the Baron, and imprison them in the stronghold. Kara and Corinne decide to work together to make Windemere a better place, and Kara begins her community garden.

Kara has blue eyes, light skin and pink lips. Her hair is blonde.

She wears a short purple and pink dress, fuchsia pink leggings, and pink shoes. She wears a tiara and a matching necklace. Her long blonde hair is loose and sometimes she is seen with high ponytail.

As Super Sparkle, she wears a short pink dress, light pink stockings, and a pair of high fuchsia pink boots. she also wear sparkly pink mask, a pink cape, black belt, a pair of pink bracelets, and a silver lightning ring given by Madison and Makayla. Her hair is in a ponytail with pink highlights.

At her 17th birthday party, she wears sparkly light pink, fuchsia pink, and light purple ballgown. Her tiara and necklace is the same as casual ones. 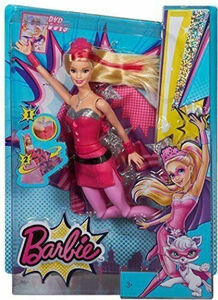 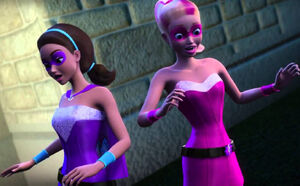 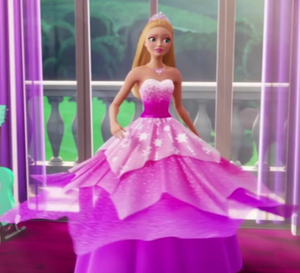 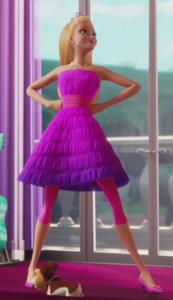 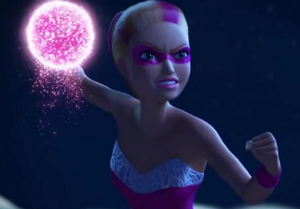 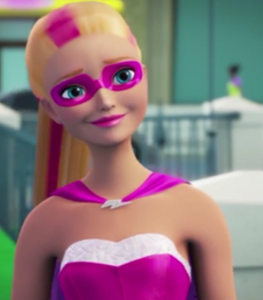 Retrieved from "https://hero.fandom.com/wiki/Princess_Kara?oldid=1790687"
Community content is available under CC-BY-SA unless otherwise noted.