Dancing with her friends.

Save Daniel and the Enchanted Forest from Rothbart (succeeded).

Odette is a young peasant girl, the youngest daughter of Baker. She is the entire opposite of her brave, courageous eldest sister Marie. Odette is shy and uncertain; she loves to dance and her father says she is a wonderful dancer. He suggests she go to village dances with Marie, but she doesn't want people staring at her.

One day, a unicorn appears in the village. Odette follows it and discovers an enchanted forest, separated from the rest of the world by a waterfall and magical portal. The unicorn opens the entrance by its horn and Odette follows it in. There, she finds the unicorn caught on a branch with a rope on its neck. Odette goes to it and tries to help the unicorn, but is shocked to discover that it can speak. Looking around for something to cut the rope, Odette sees something shining in a tree hollow. She approaches the tree and grabs a pink crystal, using it to cut the rope.

When the unicorn gets released free, the Fairy Queen of the forest appears and tells Odette that as she freed the magic crystal, she is the one who can save the Enchanted Forest, which was invaded by Rothbart, an evil wizard. Odette is unsure and gives the crystal back to the Fairy Queen. Lila, the unicorn, escorts her and on the way, she tells Odette about Rothbart. Suddenly, two giant birds appear in front of them; the large raven is Rothbart and the small crow is Odile, his daughter. Rothbart turns Odette into a swan.

However, Rothbart later sends the handsome Prince Daniel to kill Odette, but Daniel is bewildered by her beauty. When Odette turns to a human, she and Daniel fall in love.

Odette is sweet, nice, kind, very shy and an unsure young girl, but she saves Prince Daniel when Rothbart attacks him. Later in the movie, she turns out as a brave girl after she defeated Rothbart.

Odette is a teenager with light skin, blue eyes, and long blonde hair. She initially had her hair partially pulled back, and wore a white and blue dress with blue heels. The blue part of the torso had spirals printed on it.

She wears a light pink gown when she had dinner with Prince Daniel.

Her swan dress is light blue, pink, and white with layers to resemble feathers.

Odette's top is still the same, but her skirt is knee-length. She wears a pink ballet shoes. 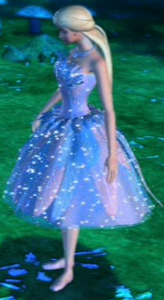 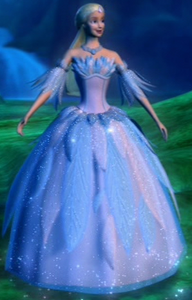 Retrieved from "https://hero.fandom.com/wiki/Princess_Odette_(Barbie)?oldid=1608682"
Community content is available under CC-BY-SA unless otherwise noted.