Princess Sarah is a non-player character from the original Final Fantasy. She is the Princess of Cornelia, daughter to the King of Cornelia and Queen Jayne, and has an unnamed younger sister.

In her NES sprite appearance, Sarah has blonde hair and wears a purple dress.

In her post-NES remakes' sprite appearance, Sarah has long mint green hair and blue eyes. She has a golden ornamental headband with a large red jewel and a golden pendant with a similar jewel. She wears a floor-length white dress that leaves the shoulders bare and has long sleeves.

Sarah is demure, polite, and comes across as a stereotypical "damsel in distress" character, needing to be rescued from danger, but the short amount of time she is involved with the Warriors of Light proves to be the help that they need in the end. 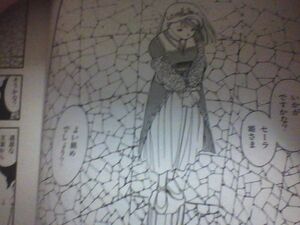 Retrieved from "https://hero.fandom.com/wiki/Princess_Sarah?oldid=1841540"
Community content is available under CC-BY-SA unless otherwise noted.