To have her curse lifted (succeeded).

Princess Styla is the sovereign ruler of the kingdom of Hytopia alongside her father, King Tuft. She first appeared in The Legend of Zelda: Tri Force Heroes, serving as a key role for all three Links to defeat Lady Maud, the witch who placed a curse on her, and help break her spell.

Princess Styla is pale-skinned and has long curly blonde hair with twirling locks in front of her round ears. For clothing wears a white flower on the left side of her hair, indigo earrings on her ears, a lovely sleeveless and strapless regal dress complete with an orange top with white spiked laces at the top, with a pale purple bell with light pink frills and wears elbow-length white gloves.

After being cursed, Styla's aforementioned outfit is entirely replaced with a plain hideous brown jumpsuit that covered every part of her body, except her face.

Princess Styla was born and raised in the land of Hytopia and is the heir to the throne and she is beloved by everyone in the land who knew her and dubbed the fairest in the land. Only one person is clearly jealous of her beauty; Lady Maud of the Drablands had resented Styla for her adorable appearance and sought to do something about it. She sends the princess an anonymous beautifully wrapped gift and the delighted Styla could not help herself and quickly opened it. It was a terrible mistake on Styla's part as she was soon sprayed with purple smoke that changed her appearance; she now wears brown full body tights that could never be removed no matter how much she tried. Utterly humiliated, Princess Styla locks herself in her room in tears, isolating herself from the rest of the world. The people grew despondent over her fate and feared that the spell would also apply to them if they wore anything fashionable, so they too began wear ordinary clothing to not suffer the same situation Styla was in. Horrified by the outcome, King Tuft issues several requests for worthy heroes who would help remove his daughter's curse by venturing into the Drablands to defeat the perpetrator responsible for her misery. These heroes turned out to be a trio of red, green, and blue Links who have answered the call to justice.

After Link completes the Woodlands Area of the Drablands, King Tuft will summon him, and Link meets both Princess Styla and the king and inquire his assistance in removing the spell. However, Styla is too distraught over her misfortune to speak to Link and quickly locks herself in her room to avoid further embarrassment. Although she shuts herself out from the general public, she can sometimes be seen hiding around the town of Hytopia and secretly cheers for Link throughout the game and if Link spots her, she will flee. The people who have seen her wandering around mistake her for a black ghost rather than the princess herself and they hope to take a photo of the "black ghost".

Once Lady Maud is defeated and the last of the Materials are gathered, Link meets with the former's younger sister, Madame Couture who tailors the Materials together to complete the Lady's Ensemble. Link wears the Lady's Ensemble and rushes back to the castle and uses its power to break the curse on the princess, restoring her former beauty to normal. Princess Styla thanks Link for his efforts and King Tuft holds a festival to commemorate the newly restored peace to the land of Hytopia. After the ceremony, King Tuft rewards Link with the Cursed Tights that Styla had been wearing throughout the main story, and Princess Styla admits that she kind of misses the tights and how they had fit her nicely, but she still much prefers her nice dresses over it. She was given the film of the festival by the Photo Bro, and she will play it when Link asks her to rewatch the ceremony. With her curse broken, Princess Styla stops hiding around town as she no longer has any reason to do so. 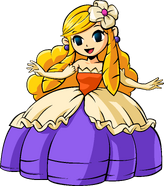 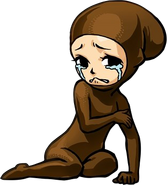