Time-travel (using the Dagger of Time)

Marry Prince Dastan and moves forward to mend relations between Persia and Alamut.

Princess Tamina is the deuteragonist in the 2010 live action Disney film, Prince of Persia: The Sands of Time.

She was portrayed by Gemma Arterton.

Tamina is the Princess of the Holy City of Alamut, which was built over the Hour Glass housing the Sands of Time. After Alamut is invaded due to Nizam's scheming, she is forced to marry Prince Dastan, the adopted son of King Sharaman of Persia, in order to keep the peace between Alamut and Persia. After Dastan is framed for Sharaman's murder, they fled Garsiv in pursuit, and she tried to stab him. But in the case of Dastan's dagger, he used it to protect himself, then returned to the past, after which he exhausted all the time sand. After they are quite captured by Sheik Amar and his henchmen, they were taken to the Valley of the Slaves, a well-designed lie that kept the Persians away. Tamina was taken to the ostrich team, but they managed to escape and enter the city where the king was buried.

When Sheik catches up to them, however, and tie them up, but after Tamina convinces him to take them to the Temple with the promise of more gold, he agrees. However their camp is attacked by asps, which is only prevented when Dastan uses the dagger. But after arriving at the village they find everything around it completely slaughtered, and they are ambushed by Hassansins. During the fight, Tamina was knocked out and the dagger was taken. They only manage to retrieve it with Seso, the Sheik's knife-thrower, sacrificing his life, before they sneak into the King's chamber to speak with Tus. Their plan to tell Tus about Nizam's schemes goes south when Nizam finds out and slits Tus' throat, and they escape to the Hour Glass. They enter the secret catacombs but due to a stray rock the ground collapses into sand, and after they are ambushed again by the Hassansin Leader, she saves Dastan by shoving the leader's asp into his face. They make it to the Hour Glass but are waylaid by Nizam, who kicks her off the edge, and despite Dastan catching hold on to her, she forces him to let go to stop Nizam.

Tamina also appears again after Dastan deactivates the dagger and the timeline is altered, and she is presented with the dagger by Dastan who hints he knows what it does. They exchange banter in the palace garden, with Dastan telling her they will know each other well enough to move forward in their talks to heal the broken trust between Persia and Alamut. 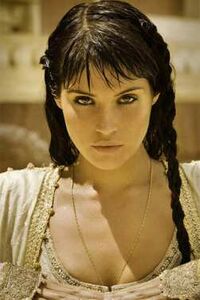 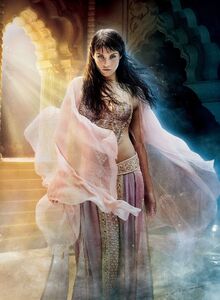 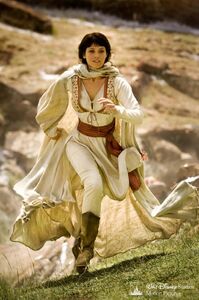 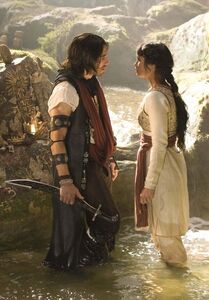