Princess Victoria, King Alteon's middle daughter, is a bounty hunter who loves adventure, gold, and fighting monsters. When adventuring, she goes by the alias Robina the Hood.

Robina gives the The Bandit's Camp (Bounty Hunting) and Quad-Force quests as well as continuing the dragon egg saga with the A Golden Opportunity, Give Until it Hurts, and Opening the Black Box quests. Robina can join you as a guest.

As in DF, she turned out to be Robina. She's the middle daughter of King Alteon. Victoria is the middle daughter. Sickly and unable to get out of bed often, she spends most of her time reading fantasy books wishing she was the great hero in the story. One night, she was visited by a fairy who offered to grant her ONE wish. Then, Victoria accidentally caught the fairy on fire with a candle, dropped a base case on 'em, and then when the guards came to see what all of the trouble was about she was forced to hide the fairy in her mouth. To her credit she only chewed twice... by accident! The rest of this story is yet unknown. 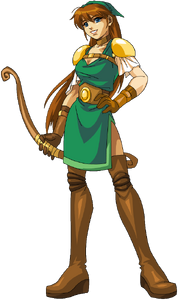