Princess of the Nothern Water Tribe

Bring Tui back to life by sacrificing herself. (succeeded)

Princess Yue is a minor character in the animated series, Avatar: The Last Airbender. She is the princess of the Northern Water Tribe and Sokka's former girlfriend before she sacrificed herself to save the Moon Spirit.

She was voiced by Johanna Braddy, who also played Jenny Matrix.

Yue was born to Chief Arnook and his wife. When she was an infant, she got a life threatening illness that put her in a constant state of sleep, making her parents worry about the possible death of their child. The sickness was so terrible that not even the best healers in the Northern Water Tribe could cure her. Fearing for his daughter's life, Chief Arnook placed Yue in the tribe's Spirit Oasis and prayed to the Moon Spirit to save her. The Moon Spirit gave her a part of it's life force, healing her illness and finally awaking her and turning her black hair white. Her parents then named her Yue after the Moon Spirit.

Before Team Avatar arrived, it was decided that she would have an arranged marriage with an egotistical yet powerful warrior named Hahn. To mark the arrangement, Hahn carved a betrothal necklace for her. While she didn't love him back, she decided to marry him in order to show respect to the tribe's customs.

Yue first meets Team Avatar when they arrive at the Northern Water Tribe, where she shows them around the tribe. She then has a conversation with Sokka, where Sokka tried to flirt a bit with her. He quickly gains feelings for Yue and they started to have arrange meetings so they could talk. After some time, Yue reveals to Sokka that even though she loves him, she can't keep meeting with him because she is already engaged to Hahn. Sokka then tells her that she can marry whoever she likes and that she should not let her people make that decision for her.

During Admiral Zhao's attack on the Northern Water Tribe, Arnook ordered Sokka to become his daughter's bodyguard, due to noticing their love for each other. During this, Yue led Aang and Katara to her tribe's Spirit Oasis so the spirits could help Aang get into the Spirit World. When Zuko captured Aang, she accompanied Katara and Sokka to find both of them on Appa.

When they return to the Spirit Oasis, they are confronted by Zhao, who fatally wounded Tui, the moon spirit. This left the waterbenders without power to defend themselves from the Fire Nation since the moon spirit controlled their waterbending and without it, they can't waterbend. Iroh then appears and is says that he is touched by how the Moon Spirit saved her as a newborn. Yue sacrifices herself to bring the Moon Spirit back to life by returning the life force that the spirit gave her. Right before losing her life, Yue tells Sokka that she would always still be with him and kissed him before vanishing completely.

Yue would later have a major effect on Sokka. This event impacted him since he thought that he could have saved her, but because he failed, his first love had died. This is first seen when he got an illumination at the Foggy Swamp, in which Yue says that he failed to save her. He eventually gets over this with the help of Suki.

When Aang went to the Spirit World to meet his past lives, Yue appears and tells him about the damage that has been made on the Avatar's spirit. She appeared again and told him to not lose hope during the war, as he already saved the world once. He would also have problems with having another person he loved with Suki, as he shushed her when they were dating when he looked at the moon. Yue is also mentioned when Zuko told Sokka about his ex girlfriend, Mai, and asked him about his girlfriend, Sokka then replied that his first girlfriend turned into the moon, to which Zuko replied his famous quote "That's rough, buddy".

Yue is a kind and gentle young girl with a sense of humour. She is also very courageous and always willing to put others before herself, as she was willing to sacrifice herself for her tribe and for the Moon Spirit. She is also extremely loyal to the tribe, since she let them control several decisions of her life, even if she disagreed with them. The best example of this is with her marriage, where she stated that she in not happy with who she is supposed to marry, but must do it anyway. 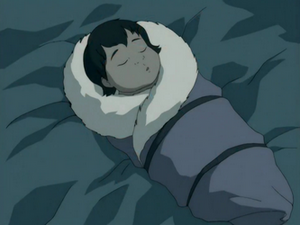 Yue as a baby, who had black hair before Tui cured her illness. 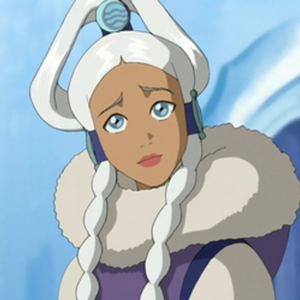 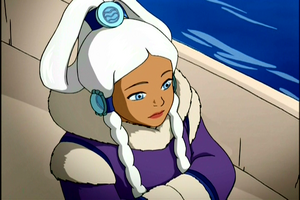 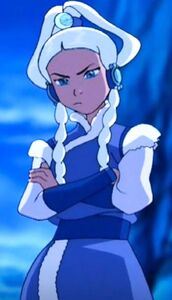 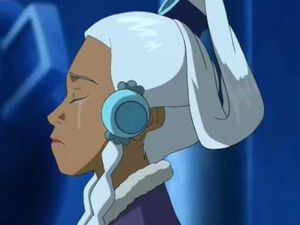 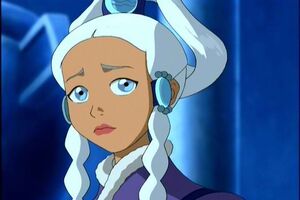 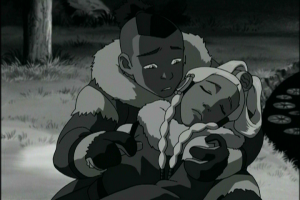 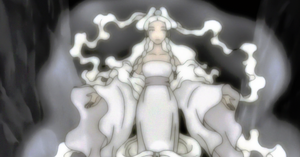 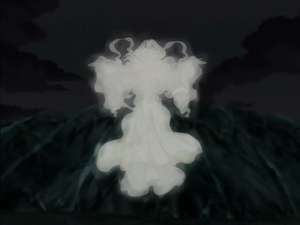 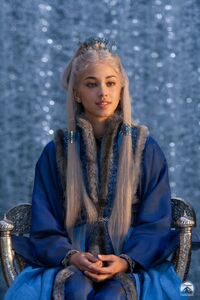 Princess Yue in The Last Airbender.