Start a Wiki
Prinz Eugen (German pronunciation: [ˈpʁɪnts ɔʏˈɡeːn]) was an Admiral Hipper-class heavy cruiser, the third member of the class of five vessels. She served with Nazi Germany's Kriegsmarine during World War II. The ship was laid down in April 1936, launched in August 1938, and entered service after the outbreak of war, in August 1940. She was named after Prince Eugene of Savoy, an 18th-century Austrian general.

Prinz Eugen saw action during Operation Rheinübung, an attempted breakout into the Atlantic Ocean with the battleship Bismarck in May 1941. The two ships destroyed the British battlecruiser Hood and severely damaged the battleship Prince of Wales in the Battle of Denmark Strait. Prinz Eugen was detached from Bismarck during the operation to raid Allied merchant shipping, but this was cut short due to engine troubles. After putting into occupied France and undergoing repairs, the ship participated in Operation Cerberus, a daring daylight dash through the English Channel back to Germany. In February 1942, Prinz Eugen was deployed to Norway, although her time stationed there was curtailed when she was torpedoed by the British submarine Trident days after arriving in Norwegian waters. The torpedo severely damaged the ship's stern, which necessitated repairs in Germany.

Upon returning to active service, the ship spent several months training officer cadets in the Baltic before serving as artillery support for the retreating German Army on the Eastern Front. After the German collapse in May 1945, she was surrendered to the British Royal Navy before being transferred to the US Navy as a war prize. After examining the ship in the United States, the US Navy assigned the cruiser to the Operation Crossroads nuclear tests at Bikini Atoll. Having survived the atomic blasts, Prinz Eugen was towed to Kwajalein Atoll, where she ultimately capsized and sank in December 1946. The wreck remains partially visible above the water approximately two miles northwest of Bucholz Army Airfield, on the edge of Enubuj. One of her screw propellers was salvaged and is on display at the Laboe Naval Memorial in Germany.

She has long blonde hair in twintails tied with anchor hair ornaments and blue eyes. She wears a military uniform similar to Bismarck's. Unlike the other Kriegsmarine girls in the game however, her uniform is not bottomless. Instead she wears a black microskirt. In her Kai art the grey areas on her uniform gain a camouflage pattern and her skirt turns white. 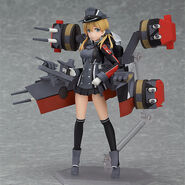 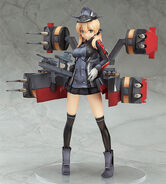 Add a photo to this gallery
Retrieved from "https://hero.fandom.com/wiki/Prinz_Eugen?oldid=1580312"
Community content is available under CC-BY-SA unless otherwise noted.