Wearing her own fashion (Merlin)

The Prismriver Sisters are a group of characters from Touhou Project, debuting in the seventh game, Perfect Cherry Blossom. Lunasa, Merlin and Lyrica are collectively called the "Prismriver Ensemble" and perform at parties and festivals. Although at first sight their instruments, Lunasa with the violin, Merlin with the trumpet, and Lyrica with the keyboard, seem scattered and disconnected, they still perform magnificent music.

During the events of Perfect Cherry Blossom, the three Prismriver Sisters are preparing to play a concert for the flower viewing at Yuyuko's mansion. They attempt to stop the player from entering the Netherworld together, and the progression of the battle is affected by which sister the player decides to focus on attacking during their first spell card. The dialog they bounce back and forth between each other and the player is actually quite comical, and shows their very individual personalities. Lunasa Prismriver is mature and mellow, Merlin Prismriver is happy-go-lucky and clueless, and Lyrica Prismriver is a sly smart-aleck.

In Phantasmagoria of Flower View, Lyrica, the youngest of the three, goes off on her own to collect material for her songs. She's not really interested in solving the flower incident and would rather focus on her performance, but unknown to her, she's not alone.

MegaMari (Lyrica)
Add a photo to this gallery 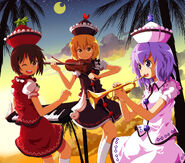 Retrieved from "https://hero.fandom.com/wiki/Prismriver_Sisters?oldid=1563683"
Community content is available under CC-BY-SA unless otherwise noted.