Part of resistance against Lord Palethorn

Study of the Occult and Magic

Saving the city of London from the forces of evil (succeeded)

Professor Hamilton Kift is the tritagonist of MediEvil 2. He is a mad inventor of 50 years. He lost his hands 8 years prior to the start of the game.

The professor aids Sir Dan on his quest against the evil Lord Palethorn. He is also the person responsible for creating the Time Machine. Unfortunately, he never got it to work properly and expressed feeling that it was a complete waste of time to make it. Daniel later found a poster of the time machine and returned to the professor's lab. The professor broke down and explained his previous involvement with the villainous Lord Palethorn and where Daniel can find the machine. 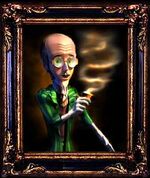 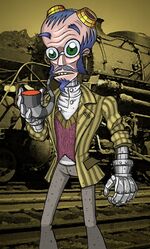 Retrieved from "https://hero.fandom.com/wiki/Professor_Hamilton_Kift?oldid=1712171"
Community content is available under CC-BY-SA unless otherwise noted.