Collect information on every Pokémon (ongoing).

Professor Samuel Oak (Japanese: オーキド・ユキナリ博士 Dr. Yukinari Ohkido) is a Pokémon Professor and a major supporting character of the Pokémon anime who lives and works at his research lab in Pallet Town. In the anime, He appears semi-regularly to give Ash Ketchum advice to help him achieve his goal of becoming the greatest Pokémon Master.

In the Japanese version, he is voiced by the late Unshō Ishizuka, succeeded by Kenyu Horiuchi as of Pokémon the Series: Sun and Moon - Ultra Legends.

Professor Oak made his debut on Pokémon: Red & Blue. When Ash reaches the Professors lab for his new Pokémon, he finds that the original 3 that were up for 'adoption' have gone. Because of this Professor Oak decides to entrust Ash with the Pokémon Pikachu. He also gave Ash his Pokédex.

He also features in the RBY series of the Pokémon Manga. He owns every non-legendary Pokémon that lives in the Kanto region.

Professor Oak lives up the road from Delia Ketchum and her son, and he and Delia often appear together as they are good friends. His known relatives are his grandson Gary and his cousin Samson.

His often-forgetful attitude and other antics are also notorious. He also has a hobby of composing senryū, haiku-like poems about Pokémon or Pokémon-related themes.

In the novelizations written by Takeshi Shudō, Professor Oak comes from a prestigious family. He has two brothers, one of whom is the mayor of Pallet Town while the other is its postmaster, and his grandfather was the first Trainer from Pallet Town to receive widespread recognition, while Samuel himself gained prominence after he published a research paper on Pokémon at the age of 20. It is also stated that he became a professor at Celadon University at the age of 25. According to Professor Elm, Professor Oak's studies and research mostly focus on how humans and Pokémon interact with each other.

The Electric Tale of Pikachu 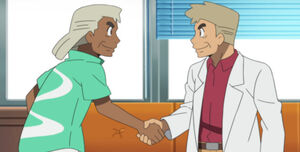 Professor Oak reuniting with his cousin 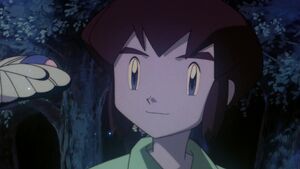 Sammy Oak/Professor Oak as a boy 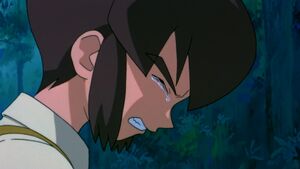