Huntsman
Leader of his Group

Professor Ozpin is the chief protagonist of the RWBY franchise. He is the Headmaster of Beacon Academy and an incarnation of the warrior Ozma.

Ozpin is introduced in "Ruby Rose", inquiring of Ruby Rose about where she learned how to fight, her future goals, and her desire to join his school. He is frequently seen with his cane despite having no visible motor impairment.

In "End of the Beginning", Ozpin's body was killed after his battle with the newly ascended Fall Maiden, Cinder Fall.

In "The Next Step", the villains believe Cinder killed Ozpin, though in "Of Runaways and Stowaways", Salem casts doubt on this when she interrogates Cinder about the matter once more. In "Family", Ozpin speaks to a Mistral farmhand named Oscar Pine through a connection later revealed in "Punished" to be that their souls have combined.

In "Unforeseen Complications", Ozpin reveals his own circumstances - because of a curse placed upon him by the gods, he is forced to reincarnate through individuals with mindsets similar to himself, with Oscar Pine as his latest reincarnation. Although, this was revealed to be untrue.

In "The Lost Fable", it was shown that Ozma, Ozpin's original incarnation agreed to an offer given by the God of Light to return to life as a being who would reincarnate, in the hopes that he would unite and guide Humanity down a path of light.

He is voiced by Shannon McCormick in the English version, and by Kazuhiko Inoue in the Japanese version, who also voiced Kakashi Hatake in Naruto, Hatori Sohma in Fruits Basket (2001) and Madara in Natsume's Book of Friends.

Ozpin is the second-most recent reincarnation of Ozma, preceding Oscar Pine. Thousands of years before the events of RWBY, the God of Light offered a deceased Ozma the chance to return to life as a being who would reincarnate in the bodies of like-minded individuals after death, in the hopes that he would reunite Humanity. Ozma agreed and was returned to Remnant. Thousands of years later, Ozpin would describe his reincarnation as a curse placed on him by the Brother Gods for having failed to stop Salem's agenda, though this was later revealed to be a lie.

At some point he helped to build Haven Academy. This fits in with it being previously established that Ozpin influenced all the academies, as Miles Luna stated that all the academies use teams because Ozpin believes in teamwork so strongly.

Some time before the events of the series, he granted Qrow and Raven Branwen with the magical ability to transform into a crow and a raven respectively.

At another time, Ozpin accepted Gretchen Rainart into Beacon, despite the objections of her older brother, Hazel. Unfortunately, Gretchen lost her life during a training mission, and Hazel blamed Ozpin for her death, causing him align with Salem.

According to Weiss Schnee, Ozpin, due to his many years of experience, was regarded as a prodigy and became the youngest person to ever become a Headmaster of Beacon Academy.

During the Beacon Arc, Ozpin looks like a middle-aged man with tousled silver hair and thin brown eyes. He has a light complexion and sharp facial features. Interestingly, Ozpin has black eyebrows, suggesting that he may have had black hair when he was younger.

He wears shaded glass spectacles and a small, purple, cross-shaped pin on the cowl around his neck. His outfit mainly consists of an unzipped black suit over a buttoned vest and green shirt. He also wears black trouser shoes and long, dark-green pants. In addition to his cane, his other frequent accessory is a mug bearing the Beacon Academy emblem, from which he drinks hot cocoa.

Ozpin is typically both stoic and affable towards people he speaks to. It can be inferred from his indifference toward Ruby fighting Roman Torchwick, as well as the way he literally launches new students into the Emerald Forest for the Beacon Academy Initiation, that he has no real problem putting his students in mortal danger, given the right reasons or to accomplish an objective.

Ozpin can be humble, admitting that he has made many mistakes in the past. In addition, he possesses a more caring side, comforting Ruby and assuring her that her appointment as team leader was not a mistake. He is seen to care for the well being of his students, as with Blake Belladonna when he told her if she needed to tell him anything, she should not hesitate to ask. Ozpin is also shown to harbor a respect for the Faunus, something made clear during his conversation with Blake, yet is highly aware of the racial discrimination they suffer from humans.

Ozpin can also be very blunt, as shown when Jaune Arc asks him questions about the launch. According to Ruby and Yang Xiao Long in "The Shining Beacon, Pt.2", Ozpin did not "seem himself" while giving his speech to the incoming students.

Ozpin is also known to believe dearly in teamwork, which is one of the reasons why the huntsmen academies focus heavily on it.

In "Unforeseen Complications", it is revealed that Ozpin was cursed by the gods of Remnant when he failed to stop Salem at an undefined point in the past. This curse causes his soul to attach to a new like-minded host when his previous body is destroyed, the two merging memories and abilities over time until only a single soul remains. As of Volume 5, Ozpin's soul is attached to and merging with that of Oscar's. Oscar can grant Ozpin control of his body, enhancing his combat prowess and the strength of his aura, though only for limited periods of time. In addition, he can forcibly take control of Oscar's body, though he seems severely drained and Oscar relays that Ozpin needs to rest after the fight.

In "Rest and Resolutions", Ozpin reveals that he himself possesses powerful magic that he used to create the original four Maidens, as well as grant Qrow and Raven Branwen the ability to shapeshift into corvids. It is stated that the amount of power expended in the creation of the Maidens greatly drained his magic. Ozpin himself admits that his magic powers are dwindling, but does not state the exact reason for it.

Before being defeated and subsequently attaching to Oscar, Ozpin harbored immense physical power as demonstrated in his fight against Cinder after she became the Fall Maiden. He possessed superhuman speed, creating green afterimages as he moved. Furthermore, Ozpin was able to resist attacks of incredible power by creating an energy barrier around himself. Whether any of these abilities were a part of his natural physical ability, Semblance (if he does have one), or his use of magic is unclear.

From what was briefly seen of Ozpin's fighting style in his duel with Cinder Fall, his style emphasizes adaptability, changing from powerful high speed strikes to rapid retreats to solid defense.

Ozpin is a capable strategist and leader. He has the ability to persuade even volatile personalities to co-operate with his plans, and knows the right balance of firmness and kindness to get the desired results from his subordinates. He is also flexible enough to "bend the rules" if he feels the situation requires it, as shown in "Field Trip". 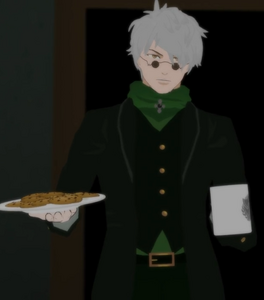 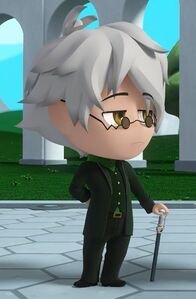