Defeating Buddy Lover And Returning To Your Normal State (succeed)

Marrying Denise At The Wedding (succeed)

Professor Sherman Klump is the main character in 1996 remake The Nutty Professor and its sequel.

He is a morbidly obese but good-hearted college professor who transforms into the skinny but obnoxious Buddy Love. He and his family are portrayed by Eddie Murphy (except his nephew Ernie Jr played by Jamal Mixon). As himself, Sherman is the only Klump never to swear.

1We first see Sherman preparing to go to work at Wellman college where he is an professor teaching chemistry to college students but once he arrives there? he discovers that most of his hamsters because his stomach raised the switch before he left it the night before? had escape and is all over the campus.

It angers his boss Dean Richmond and he confronts Sherman about the incident but he sees an hamster on the ceiling about to fall in his coffee and tries to tell him about it but he tells Sherman that he has arrange a meeting with a wealthy benefactor who could save the school's science department and he better not do anything to mess it up or ELSE, in 1 of his chemistry classes? his stomach was so close to the chalkboard that it erases notes he wanted the students study for a pop quiz and after he was finished? he sees chalk all over it while the students burst out laughing.

After class, he meets a grad student turned professor named Carla Purty, and it's love at first sight, he has dinner with family but dinner is interrupted by his father Cletus passing gas at the table more than once. 1 night he asks Carla out for a date and she accepts but while on their date, they're both made fun of by a comedian named Reggie Warrington, and they leave the night club in anger and disgust over jokes made about them. Sherman becomes depressed and after his nightmare, he goes to lab and drinks the weight loss serum that he made for overweight people and becomes athletic man.

He gives himself the name Buddy Love to hide who he really is to everyone in the college including Carla, and he asks her out again in his lab but he starts to transform back to being obese but manages to get Carla out of the lab before the transformation was completed, Carla tells him that she feels guilty for him being made fun of by Reggie and tells him she's developing feelings for Buddy and tells her that she wants him to go out with his alter ego.

Buddy's an hour late for their date at the same night club where they were made fun of at and eats more than 1 plate of the same meal but he was able to avenge Carla and himself by insulting Reggie by making jokes about him and punching him in the face causing him to fall into the piano but the joy turned into horror once the transformation from physically fit to obese AGAIN but Buddy manages to leave the restaurant driving the viper he arrived in.

One of his students, Jason, discovers Sherman's secret while in having a course collusion in the car, but a fireman had to get Sherman out of the car because he was to big for it. Dean Richman confronts Sherman about him as Buddy putting the payment for the Viper on his faculty account and tells him he arranged a meeting for him to meet with Harlan Heartly, a billionaire who plans to give $10 million dollars to fund the college's science department.

And he would give the school the money if he were to prove his formula works and Dean threatens to fire Sherman if he didn't show up, Meanwhile Sherman invites Carla to have dinner with him and his family but just as the meeting between them go well? Cletus's farts ruins dinner AGAIN and the whole family is embarrassed by it. On the night of the meeting at The Ritz? Dean sees Carla with Buddy and she insists he demonstrate Sherman's research to Harlan.

He agrees but he meets 3 beautiful women while in the meeting and after the meeting? Dean asks Buddy if he can replace Sherman and he accepts but things get ugly between him and Carla once Carla hears that Buddy plans to have the 3 girls he met in the restaurant over at Sherman's place for the night by over hearing the women's conversation. She slaps Buddy while he tells her that what the women were saying was true, she dumps him and leaves the restaurant.

Sherman starts to see that being Buddy isn't all that great as he hears Carla knocking on the door and entering his house but finds the 3 women from The Ritz sleeping by his side and his house being all messy because Buddy threw a party after he left The Ritz, he tries to get Carla to leave but she insists on telling him about Dean replacing him with Buddy but during the conversation?

Carla's sympathy turns to anger when she sees the 3 ladies Buddy brought home from restaurant in his bedroom, thinking not only Buddy spent the night with them but Sherman did too so she left and after she left he sees an eviction notice from his landlord and neighbor Mr.Wilson on his door and after Jason visits him? they go to the school only to have Dean Richmond fire him and give Buddy HIS invitation to The Alumni Ball.

On the night of the event, Sherman attempts to pour out the formula that transforms him into Buddy, only to discover that Buddy put the formula in 1 of his weight loss shakes? after the transformation. He tells Jason that he plans to drink a heavy dose of the formula in order to not to transform into Sherman AGAIN, but Jason warns him that if he were to do that, he'd die!

He punches Jason in the face after the confrontation knocking him unconscious, At The Alumni Ball? Dean confronts him for being 2 hours late for his presentation and unlike Sherman? he stands up to Richmond, things go horribly wrong for Buddy once he reveals in front of Carla and Mr. and Mrs. Klump along with party guests his plans to kill Sherman, he punches him again but Sherman manages to stop him.

They fight both verbally and physically causing Mrs. Klump to faint not once but twice! Sherman finally beats Buddy at his game and he's back to his old stuff, he explains that he thought everybody wanted him to be Buddy but after what he's been though while being Buddy, he realizes that he has to learn to be happy with just being an obese man. He and Carla dance at the end of the film. 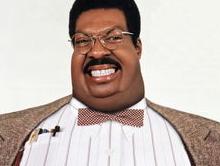 Add a photo to this gallery
Retrieved from "https://hero.fandom.com/wiki/Professor_Sherman_Klump?oldid=1260035"
Community content is available under CC-BY-SA unless otherwise noted.