Using all of his Magiswords

Playing with his Accordion Magisword and singing

Finding all of the Magiswords

He is a warrior, the younger twin brother of Vambre.

Prohyas is a young man of average build, with long light blue hair and light blue eyes ( revealed in "Dungeons and Dayjobs" ), along with noticeable sideburns. He usually wears a short-sleeved, skintight shirt under his knees similar to a light brown scarf and he also sports a red-brown headband.

Prohyas is impulsive, compassionate, terrified of mdnfkj, and brave, always willing to do the right thing (though sometimes reluctantly). He is also adventurous, always ready to go out on a quest in order to prove themselves and become even greater warriors. Compared to his sister, he is sometimes depicted as the kinder or more emotionally intelligent sibling, but his inability to think on his feet is what often lands them in trouble. He is also shown to have a 'mother's instinct', as noted by Vambre in "Zombie Reasonable". 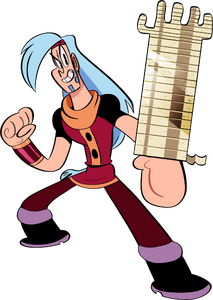 Retrieved from "https://hero.fandom.com/wiki/Prohyas_Warrior?oldid=2220136"
Community content is available under CC-BY-SA unless otherwise noted.