He is voiced by Joseph Fiennes.

Proteus and Sinbad were at first friends until Sinbad found out that Proteus was to marry Marina before the movie. Sinbad, in love with Marina, or at the very least her beauty, then ran away and the two haven't seen each other since, until the beginning of the movie. The absence caused a sort of rivalry, making Sinbad a bit bitter and intentionally unwilling to go back to Proteus's country. Proteus was unaware of the reasons of Sinbad's absence and eventually his prince duties also set the two friends apart even before Sinbad left.

Proteus' is first seen escorting the legendary Book of Peace to Syracuse, its rightful place, where it will help restore the world to order. His childhood friend, Sinbad, now a thief and a sailor, has plans of his own for the book, and tries to steal it. He and Proteus scuffle over the ship, but all attention shifts when a giant sea creature attacks their ships. Thanks to the distraction, Proteus is able to make it to land with the book intact. He introduces the ambassador from Thrace, Marina, to Sinbad, not noticing Sinbad's recognition of her. Proteus later in the evening proposes to Marina, citing the good their union would do for their nations. She hesitates, and they are distracted by Proteus's father, asking them to come back into the party.

When Eris, the goddess of chaos, frames Sinbad for stealing the Book of Peace, Proteus offers to be imprisoned in Sinbad's place, if Sinbad goes to retrieve the book. Sinbad refuses, claiming it's not his problem, but Proteus has trust in the friendship they had when they were young, and believes Sinbad will do the right thing. If Sinbad flees, Proteus knows he will be executed in Sinbad's place.

Later Dymas, tries to engineer Proteus' escape, not willing for his son to be killed. However, Proteus refuses to leave, believing that Sinbad will not let him die either. And Dymas reluctantly leaves the prison room.

Marina joins Sinbad in his journey, mostly to ensure he will return with the book, but when they return, at the very last moment before Proteus's execution, Eris appears, and Proteus and the rest learn that Sinbad kept his deal with Eris so he is spared. Proteus realizes that Sinbad and Marina have fallen in love, and knows that he could never provide for Marina what she needs, and he revokes his proposal, in a gesture of utmost unselfishness. 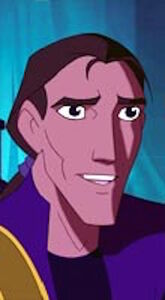 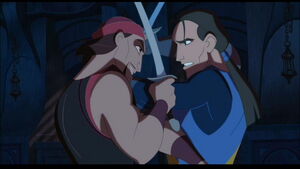 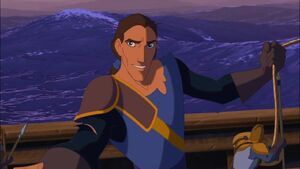 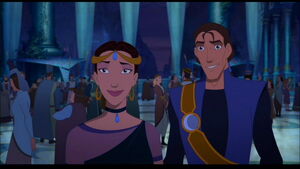 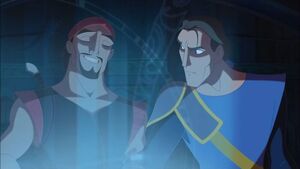 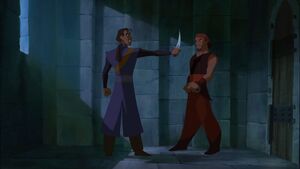