Bug or insect (by Guts)

Griffith, his Apostle legions and his New Band of Hawk Army

Bug or insect (by Guts)

Griffith, his Apostle legions and his New Band of Hawk Army

Puck is one of the earliest companions of Guts, the Black Swordsman. Puck is an Elf of the Pisky race, descendants from the ancient Spirits of Wind, he's of the same race as Evarella, sharing with her the lighter, kind-hearted but nonsensical nature that according to Evarella is common to almost every member of their race. A former denizen of Elfhelm, the idyllic Elven realm of King Hanafubuku, he went away out of sheer boredom prior to the events told in the Golden Age story Arc, mixing his destiny with the branded warrior.

Puck has no discernible appearances in the Golden Age arc, but it's strongly hinted, and later confirmed by the Skull Knight that the traveling artists with whom Puck worked are the same with whom once Judeau worked. As a parting gift, they left Judeau a little bag of elf powder: the same was used to save Guts' life after his battle with one hundred soldiers to save Casca. Skull Knight claims that their destinies were since intertwined. It is also revealed that Rickert and Puck have met when the circus performers dropped him off the place where the Eclipse was happening.

Puck is saved by Guts, as, forcefully taken away from the street artists community in which once performed, he's captured and tortured by the servant of the Snake Baron, in Koka. Puck, grateful, offers to follow Guts, sharing with him the powder left by his wings: a powder able to heal most wounds in almost no time

Guts, less than impressed, repeatedly tries to send Puck away. Puck, after witnessing Guts' obsession with killing and revenge, and the harsh treatment he deals to Vargas, decides to leave him. Unable to save Vargas' life, he's instead captured by the Count, and given to Theresia as a pet. There, he befriends the lonely child, promising her to find a way to let her escape the room in which her obsessed father closed her seven years ago. Unfortunately enough, Puck is able to help Theresia escape just in time to witness Guts savagely beat and maim the Count, and the Count himself calling upon the God Hand.

Upon seeing that even after such a crucible Guts has no words of comfort and no kindness for the child, Puck once again blames the Black Knight, but finds him crying despite his cruel demeanor.

Puck continues following Guts in his voyages, so that Guts is forced to accept the loudmouth elf living in his medicine pouch, agreeing that now the elf is the medicine itself, filling continuously his pouch with elfic powder. Puck's expertise about elves comes to use when Guts is forced to combat a small gang of "elves", led by Rosine, a young girl turned Apostle as a humanoid Luna Moth. Puck is able to discern that Rosine's elves are in fact human children, embittered by war, famine and their mistreatment by adults.

Along with Guts, he's able to save Jill; an abused child and Rosine' s friend, from being turned in a humanoid insect, and confronts the dying Rosine by telling her about real elves once residing in the Misty Valley.

He later helps Guts to escape from the clutches of Farnese, rekindling their friendship in the process.

The Tower of Conviction Arc

When Guts received a vision from the Child that Casca was being burned on the stake, he came rushing back to Godo's place, along with Puck. There, Rickert is happy to see him with Guts, claiming that Puck's selfless friendship is the only thing keeping Guts from surrendering to his inner demon. Following Guts to the Tower of Conviction, Puck befriends Isidro, a young runaway hoping to be taught swordsmanship by a real mercenary, as he sees Guts. Instead, he's "taken" as an apprentice by Puck himself, starting with the young boy a bossy, but friendly, relationship.

With Griffith's rebirth, and the subsequent battle between Zodd and Guts at the Hill of Swords, the elven mine in which Guts and Casca resided is destroyed. As two branded individuals can only reside in holy places without being pursued by Apostle and Demons, Puck proposes Guts to bring Casca to Elfhelm, the holy land of the Elves, in which they could live free.

As Guts travels with Casca, he has to depend more and more on outside help to keep her safe. So, his bond with Puck strengthens even more, as Puck is the only one able to bring them to Elfhelm. Farnese, Serpico and Isidro rejoin soon, and they meet Flora, an old and dying witch, whose apprentice, Schierke, has an elven companion of her own, Evarella. As the witch and the female elf join the party, Puck forms an antagonizing, bantering relationship with the less sophisticated and more serious Pisky.

As Skull Knight reveals (and Evarella confirms a shortly after) that King Hanafubuku may be able to cure Casca's insanity, Puck's role remains leading the party to his former kingdom. 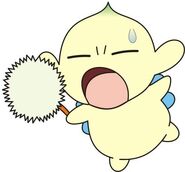 Add a photo to this gallery
Retrieved from "https://hero.fandom.com/wiki/Puck?oldid=1709204"
Community content is available under CC-BY-SA unless otherwise noted.