Peabo Pudgemeyer, best known as Pudge, is a supporting character in Cats Don't Dance. He is a juvenile penguin who wears four outfits in all, including both the sailor outfit and the formal suit he wore to the premiere of L'il Ark Angel. Ever since Danny Cat helped him load a block of ice onto a flatbed and showed him his dancing skills, Pudge has been best friends with Danny and (presumably) looked up to him as a big brother figure. It isn't until the entry to the studio that his name is revealed. He, unlike most of the animals, is bottomless (meaning that he doesn't wear any bottom clothing). Pudge is voiced by Matthew Herried. 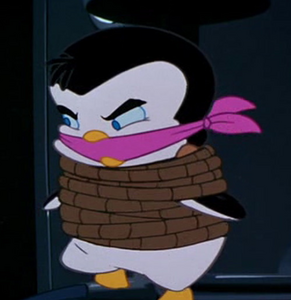 Pudge kidnapped by Darla Dimple
Add a photo to this gallery

Retrieved from "https://hero.fandom.com/wiki/Pudge?oldid=1711963"
Community content is available under CC-BY-SA unless otherwise noted.