Punch-It & Scratch-It are two of the gorgonites from Small Soldiers.

Punch-It is a large blue rhino-like Gorgonite (Looks like a Humanoid Brontotherium) and Scratch-it is an orange frog-like monster. Scratch-It is Punch-It's constant companion and seems to never leave Punch-It's shoulders.

Punch-It and Scratch-It were created by Irwin Wayfair who was toy creator of company called Heartland Playsystems and then bought out by Global Tech. Industries. His partner's name was Larry Benson (the creator of the evil Commando Elite).

Punch-It and Scratch-It are the Gorgonites. They are supposed to really do anything except to always have lots of fun and make peace all the time. There were only two times Insaniac really helped out and that was when the Gorgonites finally tried to help the Fimple and Abernathy families fight back against the Commando Elite. 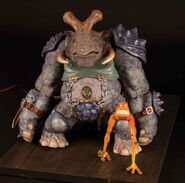 Retrieved from "https://hero.fandom.com/wiki/Punch-It_%26_Scratch-It?oldid=2074319"
Community content is available under CC-BY-SA unless otherwise noted.