No information
Purple Yoshis are a variety of Yoshi that first appeared in Super Mario World 2: Yoshi's Island.

Purple Yoshis appeared in Super Mario Sunshine. Yoshis can turn purple by eating a Durian or a Pepper. While purple, they can spit juice, turning enemies into Yoshi Platforms that move horizontally.

The Purple Yoshi of this game is playable on the fifth stage of each eight-stage world.

Purple Yoshi, with Brown Yoshi, were originally intended to be in Yoshi's Story but both were removed in the final version. A Purple Yoshi still appears in the intro of Yoshi's Story. Artwork for the Purple Yoshi was also released alongside the game leading people to believe that they were an unlockable character that could be unlocked by collecting every coin in the game and was covered by numerous websites but this rumor was eventually debunked.

They reappear in Yoshi's Island DS, with an identical role to that of Yoshi's Island. At the end of the game, Purple Yoshi, along the other Yoshis, with Baby Wario on the back, help defeat Bowser.

In Yoshi's New Island, Purple Yoshis are again playable on the fifth level of each world. Also, if a Grim Leecher touches any Yoshi color, the Yoshi will turn purple and the controls will be reversed.

Purple Yoshi makes their Smash Bros. debut in Super Smash Bros. for Nintendo 3DS / Wii U as an alternate color for Yoshi. They now wear orange shoes, similar to their appearance in Super Mario Sunshine.

Though Purple Yoshi has artwork for the game Yoshi's Story and is even in the intro sequence, they are absent. Their artwork depict them with dark pink shoes and a red saddle, which would remain their design from then on, except for Super Mario Sunshine, where it wore orange shoes as the other Yoshis in that game. 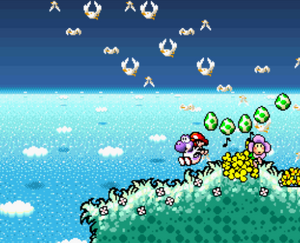