Puss in Boots is the tetartagonist from the Shrek film series and the main protagonist of the film with the same name and its Netflix spin-off animated series The Adventures of Puss in Boots. He voiced in English and both Spanish versions by Antonio Banderas in the film and Eric Bauza in the series. He is based loosely on the fairy tale character of the same name, and is the main "other fairy tale character" in the four sequels. He was introduced in Shrek 2 and speaks with a Spanish accent.

Puss took place in the prequel as the main and titular character.

The Adventures of Puss in Boots

The series sees Puss in Boots fight off an endless legion of invaders to protect the previously hidden city of San Lorenzo, after his actions unintentionally broke the spell that protected its legendary mystic treasure from the outside world and must also find a way to restore the protection spell that will cloak the town once more.

Recommended to King Harold by Doris (the Ugly Stepsister and barmaid of the Poison Apple Inn) as a famous ogre assassin, Puss is hired by the king to assassinate Shrek. However, unlike his fairy tale counterpart, he does not try to trick the ogre into changing into a mouse, but instead makes a direct, frontal assault on Shrek, which works up until the feline gags on a hairball, spitting it up. Shrek and Donkey think of what to do with him as Donkey even proposes to give him the 'Bob Barker treatment', but the swashbuckling cat begs for his life. Puss claims to have taken then contract to help his poor family, consisting of a litter of siblings, a sick mother and a father who lives off the garbage (although he may have been lying so Shrek would spare his life). Ultimately, they spare his life, and Puss proposes to the ogre he owes a life debt to him, in thanks. Although there is some tension/rivalry between Puss and Donkey (who seems nervous that Puss is taking his place as "annoying talking animal" and as Shrek's best friend), the three eventually become close friends and allies.

Shrek appears to have accepted this debt, as Puss in Boots stays with him throughout the course of the film. He has also stated that he "hates mondays". When Shrek and Donkey enter the castle to find Fiona and are being chased by the castle's knights, Puss repays his debt to Shrek by holding them off (he removes his hat, looks at the guards cutely, and then attacks them when they stop and say "aww!") After Shrek and Fiona get back together, and the king turns back to a frog, Donkey finds out he has become a dad. Due to the friendship that has developed, Puss decides to be Donkey's dronkeys' uncle.

Donkey and Puss remain in Far Far Away with Fiona and Shrek, helping the royal couple run the country in the place of the ailing king. Puss joins Shrek and Donkey on their journey to find Artie (Fiona's cousin and heir to the throne) and later encourages Shrek to be kinder to Artie to gain the teenager's trust. He also tries to advise Shrek who has just found out that Fiona is expecting a baby, on fatherhood.

When the group is magically sent back to Far Far Away by Merlin, Puss and Donkey have their bodies accidentally switched, something they were not happy about. The two swapped animals later join forces with the Far Far Away princesses and other captives of Prince Charming and help rescue Shrek. Towards the end of the movie, they confront Merlin and demand he put them in their correct bodies. He does so, although their tails seem to have been switched this time (in the next scene, this is shown to have been corrected as well). At the end of the movie, Puss helps Shrek and Fiona care for their new born ogre triplets. He has trouble with them pulling his fur and tail.

In Shrek the Halls, Puss tells the story of Santa Claus as a smooth Spanish cat (similar to himself). He is distracted from telling the tale when he sees a glass Christmas tree ornament and begins batting at it. When he realizes what he was doing, he walks away muttering "I have shamed myself". Later, when Shrek explains that he never celebrated Christmas before and wanted it to come right, Puss tells his friend "Christmas just comes".

Puss did appear in the final film, released theatrically in May 2010. The time change caused by Rumpelstilskin has made him fat and lazy.

A pint-sized powerhouse, puss is one tough,contentious, suave, charismatic, flirtatious dude. He is very much in full control of his emotions, rarely expressing fear and able to keep calm in the face of danger. For a good price, he'll hunt down and capture anybody. He is an expert theif, but has a strict moral code and refuses to rob churches and orphanages, yet happily robs from people who don't NEED their riches, or won't use them for the greater good, such as Jack and jill. Puss is also very intelligent, strategic, and quick-witted, as well as powerful enough to battle enemies who are bigger than himself. His claws can hurt shrek, even though shrek's green skin is very tough, and his claws can Pierce glass, as well. He also sarcastic, snarky and droll. He also has a form of hypnotic powers, employing a begging expression, which involves expanding his pupils, lowering his head, and holding his hat. This effect enables him to break weak-minded individuals, and exploit people under the influence of the begging face.

He only uses this power in extreme circumstances, and for the greater good. During the events of shrek the third, puss's consciousness was interchanged with that of donkey, and while inhabiting donkey's body, puss attempted the begging look, yet it was ineffective. Puss is highly popular with the ladies, has an active sex life with multiple female cats, and is considered cute by human women, as they often pamper him, and in an alternate timeline, the ogres spoiled him, making him a pathetic, morbidly obese freeloader with no fighting or hunting skills. He couldn't even get into his boots in that timeline.

Puss in Boots makes a silent cameo in the Shrek the Musical song, "Travel Song" as Donkey says "Hey look, a cat that's wearing boots, that's crazy!". Puss tips his hat to Shrek and Donkey and walks off. He is one of the many puppets seen in the song, along with a bunny Shrek scares away and some African-style animals that parody the opening number of "The Lion King". 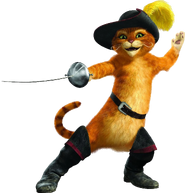 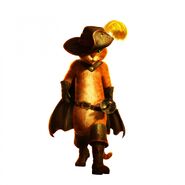 Add a photo to this gallery
Retrieved from "https://hero.fandom.com/wiki/Puss_in_Boots_(Shrek)?oldid=998032"
Community content is available under CC-BY-SA unless otherwise noted.