Pyra is one of the main deuteragonists of Xenoblade Chronicles 2. She is a Special Legendary Blade who grants tremendous fire-elemental power to her Driver, Rex. As a Blade, she is immortal and has the ability to recover from injuries quickly; however, she will die if the Core Crystal on her chest is destroyed, or when Rex dies. She is the long-time girlfriend of Rex who loves him and cares about him with all her heart, and is also the best friend of Mythra. Pyra and Rex embark on a journey to search for Elysium, and Rex is devoted to protecting her.

She is voiced by Shino Shimoji in the Japanese version and Skye Bennett in the English version.

She wears a golden tiara with an emerald gem in the middle, tiny emerald gem earrings on each of her ears, a revealing skin tight red battle armor that exposes a large amount of her back, red stockings, and red short shorts.

Despite being known as one of the most formidable fighters in history, Pyra is a benevolent and respectful young woman who intends to bring peace among both Blades and Drivers. Pyra has a warm heart and usually acts politely, she never cares about herself due to her hatred for selfish behaviour. Pyra also can be expected to be polite, which shows that she does not have a rude nature. However, she doesn’t hesitate to fight and will do so when the people she cares for need her help. In spite of her cheery demeanor, Pyra is very weary of her past mistakes, and she resolves to amend them.

Pyra is a mysterious Blade with power over Fire. She sets off Rex's quest after he discovers her — and a bright red sword — inside a wreck salvaged by the mercenary group Torna. Pyra is in fact the Aegis, one of the first Blades created by the Architect and stolen from Elysium. Pyra is, on the outside, pretty nice and polite, as well as rather meek; however, as the Aegis, she holds intense power. Her only wish is to return to Elysium to set right what went awry 500 years ago.

Early in the game, a certain event causes Pyra to transform into a different Blade, known as Mythra. She holds power over Light. Compared to Pyra, Mythra is harsh and does not mince her lines, but still has a soft spot for people. Like Pyra, her wish to return to Elysium remains.

As depicted at the end of Xenoblade Chronicles 2: Torna - The Golden Country, Pyra was born when Mythra, in her grief and guilt over the deaths of the Tornan Titan and Milton that she caused while fighting Malos, sealed herself away to ensure her power would never cause such a tragedy ever again. Addam then took Pyra with him and sealed her and her sword in an ancient Tornan warship he then sank beneath the Cloud Sea until such a time when Pyra's power would be needed again to save the world, while sealing the Pneuma sword away in the Spirit Crucible in Leftheria. Meanwhile, Jin, Lora, Haze, and Mikhail went to another Titan to meet up with Addam's militia that set up camp there, but are attacked by Indol forces under the new Praetor Amalthus, resulting in Lora's death, Haze falling into Amalthus' hands, and Jin becoming a Flesh Eater to save his memories of Lora.

Pyra remained asleep in her self-induced eternal slumber for 500 years before the warship is salvaged by a crew hired by the Torna mercenary group that Jin had joined after discovering Malos survived his final clash with Mythra 500 years ago at the start of Xenoblade Chronicles 2. When they enter the chamber where she slumbered, Rex approaches her sword that was placed at the foot of her glass coffin she slept in. When his fingers just barely touched the Core Crystal in the hilt, causing it to resonate, he is immediately cut down from behind by Jin before he destroys the sword as well. Pyra's body is then taken by the Torna group for their own intentions.

Meanwhile, Rex awakens in Pyra's dreams, finding her standing by a lone tree in a vast field overlooking the town of Elysium below. After Pyra explains everything to Rex, she offers him a way to return to the land of the living via sharing her Core Crystal with him. While initially hesitant, Rex accepts Pyra's offer, resulting in a "X"-shaped piece of her Core Crystal being infused to Rex's chest, reviving him from the dead, causing her own body that Malos was carrying back to their ship to awaken in a swirl of flames, before she burst out of her coffin, ready for battle, as Rex himself erupts from the lower decks where Jin had killed him with Pyra's sword restored, ready to fight.

At one point, Malos and Sever have Rex cornered and Malos passes his sword to Sever to finish him off, but Pyra steps in just in time to shield Rex from the strike. Rex and Pyra buy time for the salvage crew to board the Maelstrom and flee the area while Malos calls in the Monoceros to attack Pyra and Rex after Nia and Dromarch decide to defect and aid Rex after seeing just how psychotic Malos was when he ordered Nia to kill the salvage crew earlier to remove any witnesses as they had fulfilled their duty and were of no further use for the Torna group. Luckily for Rex, Pyra, Nia, and Dromarch, Azurda arrives and is able to provide enough of a distraction to give Pyra and Dromarch time to grab Rex and Nia and escape on him, even as he takes damage from the Monoceros as he flees. Jin chooses not to pursue as they got what they needed already and he'll send Akhos after them in the meantime.

After retreating to the Titan Gormott, Azurda reverts to his larval state to survive his life-threatening injuries, and Rex and Pyra's journey soon begins as they first have to help rescue Nia and Dromarch after they are arrested as part of a trap with being used as bait to draw in Rex and Pyra. After then befriending and being joined by Tora and his Artificial Blade Poppi, and rescuing Nia and Dromarch, Rex and Pyra's journey soon leads them to meet with Vandham and his Blade Roc, but when Pyra leaves during the night to surrender to Torna as she meets with Malos and Ahkos, Rex and the others follow and come to her aid, but due to being unable to fight thanks to Ahkos and his Blade Obrona being able to manipulate the Ether flow of the area, Vandham is soon forced to effectively commit suicide to try and buy time for Rex and the others to escape. When Rex refuses and keeps fighting after Vandham is finally cut down, as Rex is about to be killed, Pyra is forced to break Mythra's self-imposed seal on her power and awaken her to not only save Rex, but force Ahkos and Malos into retreat by slaying their Blades and damaging their Core Crystals beyond repair with a strike from Siren. From that point, Pyra and Mythra switch back and forth whenever conversing with Rex or their allies, such as when they are relaxing at a hot spring, and Mythra appears to try it out, much to Nia and Poppi's shock and surprise until Pyra explains that when she told Mythra about it, Mythra was dead set on giving it a shot, making it appear that Pyra and Mythra treat each other as sisters, despite sharing the same body and Core Crystal.

When Jin overpowers the group later, Pyra threatens to commit suicide with Siren unless Jin spares the others in return for her surrender. With how important Pyra was, and suspecting she had an ulterior motive should he force her to kill herself, Jin concedes, and once Pyra is taken into Torna's custody, Malos reveals that he intends to use her to restore his own Aegis Core Crystal that was damaged following their last fight during the Aegis War. He then painfully absorbs the energy needed to restore his Core Crystal and Aegis powers, resulting in Pyra being left a lifeless husk. When Rex arrives later to save her, both Pyra and Mythra spiritually contact Rex and beg him to give up and flee, revealing that their true wish to return to Elysium was to die, as Mythra felt her powers were a curse because of what she did back in the Aegis War with killing Milton and the Tornan Titan while fighting Malos back then. However, Rex's refusal to give up and keeping his promise to them causes Pyra and Mythra to fuse and unlock their true Aegis form of Pneuma, thus making Rex the Master Driver because he had full control of Pneuma's powers compared to how Addam could not handle the power because of his impure link with Mythra when they were together, and Rex had also accepted taking on the burdens that Pyra and Mythra had resting on their shoulders, proving him worthy of Pneuma's power.

Although Malos still proves to be able to climb the World Tree to Elysium first and reach Klaus, the Architect, and then gain control of Aion to destroy Alrest, Pneuma and Rex arrive with their allies and soon manage to deliver a devastating and crippling blow to Aion, which also cracks Malos' Core Crystal, leaving him mortally wounded. Malos shares a few final words with Rex before dying and his body dissolving, with Pneuma hoping he's at peace now, but shortly thereafter, with Klaus' death upon the death of his other half Zanza by Shulk, the Conduit shuts down and the World Tree threatens to fall on Alrest. Pneuma deceives Rex and the others with sending them to the escape pods while she remains behind to use Aion to destroy the World Tree before it can collapse on Alrest. Although Rex refuses to let Pneuma die alone, he is left with no choice as Pneuma transfers the rest of her Core Crystal to Rex, resulting in him holding the complete Core Crystal in his hand, as he no longer needed it to stay alive as it had already restored his heart and internal organs from the fatal injuries Jin dealt to him previously, reverting him back to his salvager outfit. As Rex and the others evacuate on an escape pod, Pneuma activates Aion and triggers its self-destruct to destroy the World Tree. In the process, the escape pod is hit by debris and breaks up, but as a final gift to him, Pneuma allowed Azurda to return to his full-grown Titan form again, saving everyone, before they head towards the new landmass that the other Titans were combining with, to give humanity and the other residents of Alrest a new home to survive on.

However, as Rex and his allies enjoy their happy ending, one of the small green particles from when Aion self-destructed and saved Alrest at the cost of Pneuma's life results in her Core Crystal coming back to life. After momentarily blinding everyone with the beam of light it generates into the heavens, it is revealed that the Core Crystal has revived both Pyra and Mythra, in separate bodies no less, allowing them to reunite with Rex and all their friends and enjoy their new future together.

Pyra is a downloadable playable character in Super Smash Bros. Ultimate, alongside Mythra, and was released on March 4, 2021. 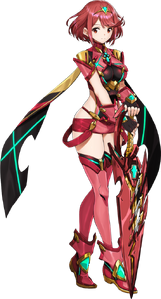 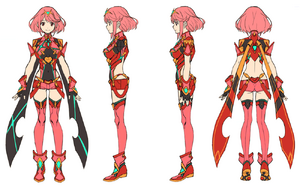 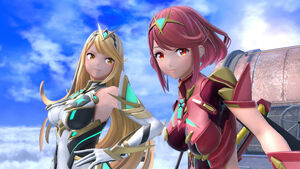 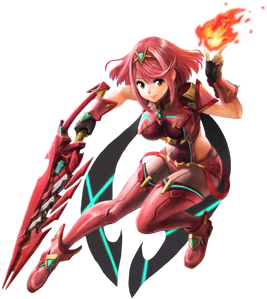 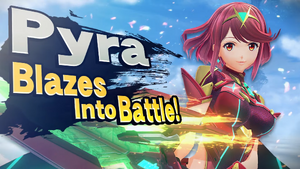 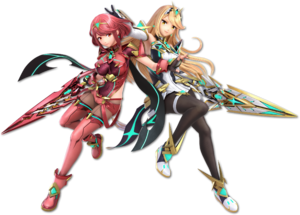 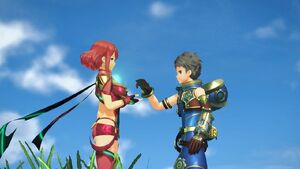 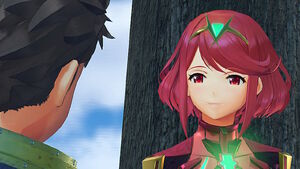 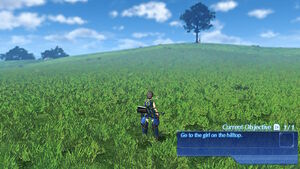 pyra at the tree