Teaching and helping others.

Pyrrha Nikos is a major character in the RWBY franchise, serving as a deuteragonist in the American animated webseries RWBY, its Japanese manga prequel/adaptation. She was a student at Beacon Academy and a member of Team JNPR with incredible combat prowess.

She was voiced by Jen Brown, who also voiced Carolina in Red vs Blue.

Pyrrha is a very tall, muscular girl with fair skin and extremely long red hair that she commonly wears in a ponytail. She has green eyes, which she often compliments with green eye shadow. She wears an armored brown and gold overbust corset, red mini-skirt, red sash with brown belt, elbow-length brown gloves, bronze greaves and a bracer, and browm heeled boots. She wears various accessories such as a gold plate bearing her emblem on her waist, a gold circlet with green gemstones, a bronze bracelet, and a bronze gorget.

Pyrrha appeared as a character in the defunct mobile video game RWBY: Amity Arena. She served as the tutorial character, walking the player through the controls and types of units, as well as the story mode.

In the game's primary multiplayer mode, Pyrrha appeared as several units. the standard Pyrrha unit was a ground-based melee unit that dealt damage to nearby enemies with her spear, and as a special ability could throw her shield for a powerful long-range attack. The Rifle Pyrrha unit was a long-range unit that fired at enemies from afar, keeping her distance while dealing damage. The Pomegrenade unit teamed Pyrrha with Nora Valkyrie, launching Nora into the air to deal extreme damage to the selected area.

Pyrrha is incredibly kind and supportive, always greeting others with a smile and doing anything in her power to aid them with whatever troubles they are having. She is incredibly selfless and modest, preferring to underplay her own skills and popularity to instead focus on her loyalty and interest towards her friends and allies. She especially enjoys helping others progress, and will often enjoy watching or even teaching others to better themselves.

Because of her celebrity status, she found it difficult to interact with others , as they woul always priase her or even avoid her out of fear that she was too good for them. This upset Pyrrha greatly, as she just wanted to be seen as on par with others and not have them priase or objectify her, which she accomplished with her frineds in Team JNPR and Team RWBY.

Pyrrha holds strong ethical beliefs, and will support them in any regard. She will often risk herself for the greater good, and despite being a quick thinker and strategist, will always think through the ethics of an action before performing it. This dedication to her morality has lead her to hesitate and even struggle with her sense of duty, and she is prone to sadness and crying when overwhelmed with the conflicting ethics of a decision, always wodering if she did the right thing.

While Pyrrha is often an optimistic and cheerful person, she is known to become incredibly angry at bullies and villains, though she knows how to keep her anger in check.

Pyrrha is a master combatant, utilizing her vast knowledge of combat strategy and opponents' weaknesses to excel in fights. She uses advanced martial arts and acrobatics to perform incredibly fast and varied attacks.

She is also a master marksman, able to throw her weapon Miló, in spear form, so precisely that it can pierce a person's hood to a tree, while they are in motion, hundreds of feet in the distance. She can also use Miló's rifle mode for more ranged attacks, which she is again a master marksman. She also knows how to utilize her shield, Akoúo̱, for both solid defense and both melee and ranged attacks. Pyrrha is also extremely strong, able to smash down trees with her shield and propel others into the air.

Pyrrha possesses a Semblance, a power unique to her drawn from her soul. Her Semblance, called Polarity, allows her to control metal via magnetism. She can use this to propel her own weapons, as well as move or restrain opponents' or allies' weapons or armor, capable of propelling a person through the air. She can also use it to control metal in her environment, usually to use as projectiles. During combat, she uses her Semblance sparingly in order to keep her opponents off-guard and provide them with little information on her abilities.

Like all creatures with a soul, Pyrrha also has possesses an Aura, a physical defense generated by her soul. This durable field is invisible except when it is overtaxed, where it flashes red. Her Aura defends her from attack and can even heal minor wounds, but if it takes too much damage it will become depleted and require time to return.

Additionally, Pyrrha is incredibly intelligent, both with combat strategy and general studies. She aided Jaune in his combat training, and was already knowledgeable about Funus biology and world history even before coming to Beacon. 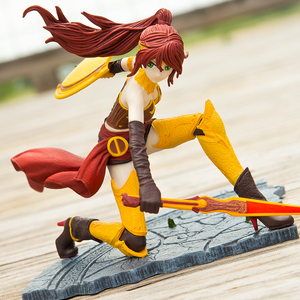 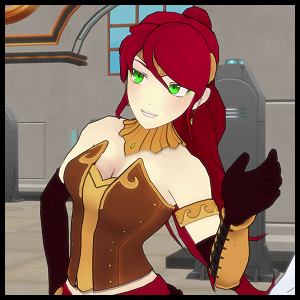 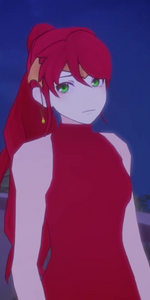 Pyrrha's dress for the Beacon dance. 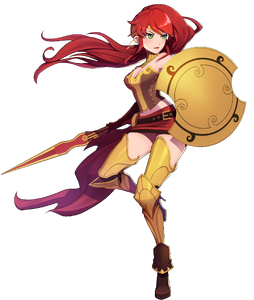 Pyrrha as she appeared in RWBY: Amity Arena. 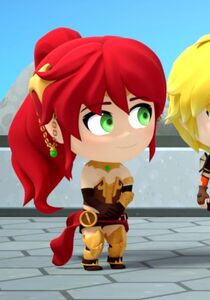