Heroes Wiki
Register
Don't have an account?
Sign In
Advertisement
in: Outdated Articles, Articles under construction, Infobox Update,
and 23 more

Videogame character
Q*bert is the protagonist of the Q*bert series of games. His job is to jump on the tile shaped pyramids in order to make them the exact same color, or save his love interest, Q*bertina, all while trying to avoid the evil Coily, Ugg, Slick, Sam, and Wrong-Way.

He was voiced by Adam Sandler in Pixels.

Q*bert's debut title, which gave him he task of turning all the cubes on the pyramid into a single color. This was when he first faced his adversaries- Coily, Wrong-Way, and Ugg, along with putting a stop to the disruptive behaviors of Slick and Sam.

In Faster Harder More Challenging Q*bert, Q*Bert now had to deal with Q*bertha, a member of his species that was madly in love with him.

In the second game in the series, Q*bert now had to rotate a set of cubes until they had all the same color in a row, this time having to avoid Meltniks, Soobops and Rat-A-Tat-Tat. Once again, the reason was never explained.

As with the first game, Q*bert's role in Q*bert 3 was to hop around on a set of blocks to change their color, while avoiding Coily, Wrong-Way and Ugg, plus new enemies Frogg, Top Hat and Derby.

In the Saturday Supercade cartoon of Q*bert, the character was depicted with arms and legs wearing a red and white jacket, and lived in 50's America-esque town with his friend Q*ball, and his girlfriend Q*tee. The series depicted Q*bert facing several problems brought on by either his mistakes, his friends mishaps, but mostly Coily and his gang (Slick, Wrong-Way etc.) causing trouble.

Q*bert was confirmed to appear in Disney's 52nd animated feature, Wreck-It Ralph, along with the rest of the ensemble from the first game. Fix-It Felix, one of the characters of the film, knows how to translate "Q*bertese" (which composes mainly of gibberish and random symbols contained in speech marks). They start out as homeless characters who have had their game unplugged, so Ralph offers them a cherry which he has taken from Pac-Man. At the end of the film Q*bert and the gang are taken into Fix-It Felix Jr. to help them out on the bonus levels.

Q*bert is one of the two tetartagonists ( the other being Lady Lisa) and the only video game character in the film that allies himself with the human cast of the film, acting as their pet and companion. 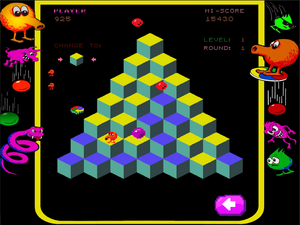 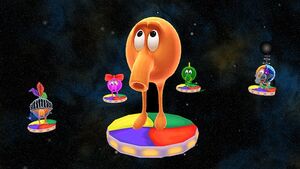 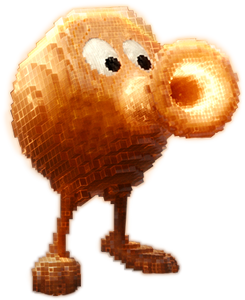 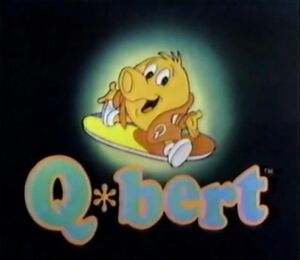 Q*bert in the TV series

Q*bert and his friends rendered homeless after their game was unplugged. 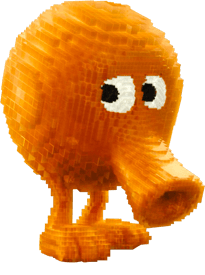