Qi'ra is the deuteragonist of Solo: A Star Wars Story. She is Han Solo's childhood best friend and first love from the planet Corellia. The pair live on the streets before he flees the planet. Qi'ra subsequently becomes a lieutenant in the Crimson Dawn crime syndicate.

She is portrayed by Emilia Clarke, who also portrayed Daenerys Targaryen in Game of Thrones, and Sarah Connor in Terminator: Genisys.

Qi'ra tried to escape off Corellia with Han, using a stolen hyperfuel coaxium as payment for passage on an outgoing transport, but was apprehended while Han got away. Qi'ra would not see Han again for three years, and in that time she became a member of Dryden Vos' criminal syndicate known as the Crimson Dawn. On Vos' orders, Qi'ra joined Han, Chewbacca, and Tobias Beckett in a heist to steal unprocessed coaxium from the mines on Kessel, following a previous failed heist on the planet Vandor. To procure a ship for the heist, the team hired Lando Calrissian, captain of the Millennium Falcon. After reaching Kessel, the team infiltrated the mines with Qi'ra posing as slaver delivering Han and Chewbacca as slaves. Lando's droid, L3-37, instigated a riot to keep the guards occupied while they stole a consignment of unprocessed, volatile coaxium. The team successfully escaped on the Falcon, thanks to Hans prodigious piloting skills, and delivered the coaxium to the planet Sareen in less than twelve parsecs.

Upon arrival however, Han planned to sell the shipment to the Cloud Riders, who were in fact a rebellion group led by Enfys Nest. Han and Qi'ra tried to deceive Vos with fake coaxium, but he saw through their cunning plan thanks to his "inside man", Beckett. However, it is later revealed that the fake coaxium is real, and it was all a ruse to lure Vos' men into a trap. Beckett took Chewbacca hostage and escaped with the coaxium. Han, Qi'ra, and Vos engaged each other in a gunfight, resulting in Qi'ra killing Vos. She then urged Han to help the Cloud Riders and rescue Chewbacca, insisting she would join him shortly. After Han left however, Qi'ra sealed the room. Alone aboard Vos' yacht, she contacted Vos' superior who was revealed to be Darth Maul. Qi'ra informed him of the mission's failure and assumed Vos' position. Shortly after rescuing Chewbacca and killing Beckett, Han saw Qi'ra leaving in Vos' yacht.

Qi'ra was a very complex woman. When she was younger she was hopeful that she could escape the criminal life and strove for something better. But as she grew older she realized that because of all the bad things she had done, there was no escaping the criminal life. Despite having grown up on the streets, she was able to adapt to a lusher lifestyle and fit in with the Crimson Dawn gang. Having known Han for so many years, she believed she may have been the one person who could see him for who he truly was, thinking he was “the good guy”. She was a fighter and had been trained in combat by Vos, which helped her survive. 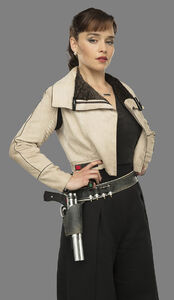 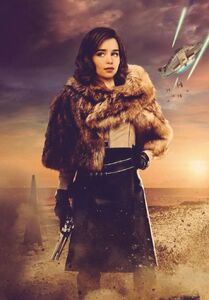 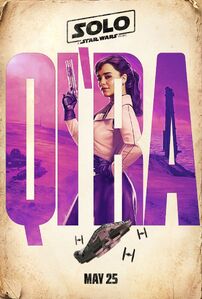 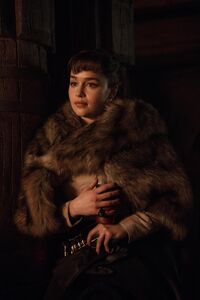 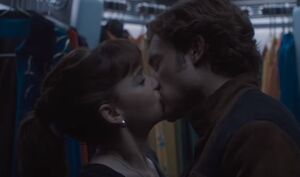 Qi'ra kisses Solo
Add a photo to this gallery

Retrieved from "https://hero.fandom.com/wiki/Qi%27ra?oldid=1903097"
Community content is available under CC-BY-SA unless otherwise noted.