Quacker Jeff Duck is a recurring character in the Tom and Jerry series.

He is a yellow duck.

Quacker is normally getting chased by Tom in the Tom and Jerry series and Jerry is trying to save Quacker from getting eaten by Tom.

He's known as the most annoying character in the cartoon. Another recurring character in the series was Little Quacker the duckling, who was later adapted into the Hanna-Barbera character Yakky Doodle. He appears in Little Quacker, The Duck Doctor, Just Ducky, Downhearted Duckling, Southbound Duckling, That's My Mommy, Go Ducky and The Vanishing Duck. Quacker talks a lot compared to Tom and Jerry. In many episodes, he is the only one who speaks. He's very trusting, even trusting Tom in many situations in which Tom wishes to eat him. He's a friend of Jerry, but unlike Jerry harbors no hard feelings towards Tom. 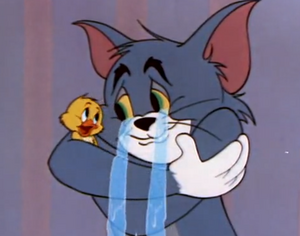 Retrieved from "https://hero.fandom.com/wiki/Quacker?oldid=2248694"
Community content is available under CC-BY-SA unless otherwise noted.