No information
The Quahog 5 News' Crew is a supporting team from TV Series "Family Guy".

The Quahog 5 News's Crew is a team of giornalists and Griffin family's friends, composed by Tom Tucker, funny and playful anchorman, Joyce Kinney, initially there to avenge her, but then to normally carry out its work as normal journalist and anchorwoman, Tricia Takanawa, asian reporter and Ollie Williams, funny meteorologist. Formerly, Quahog 5 News' anchorwomn was Diane Simmons, but she became a traitor killing some people, including her former boyfriend James Woods, for indict Tom; however, she was killed by Stewie when she tried to kill Lois. 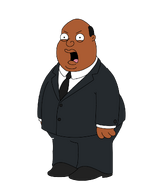 Add a photo to this gallery
Retrieved from "https://hero.fandom.com/wiki/Quahog_5_News%27_Crew?oldid=2036197"
Community content is available under CC-BY-SA unless otherwise noted.