Quake (real name Daisy Louise Johnson), is a fictional character and superheroine from Marvel comics, appearing as a major character in the Secret Wars comics, a supporting character in the New Avengers comics, and one of the main characters of the Agents of S.H.I.E.L.D. and Force Works comics.

She is the daughter of the supervillain Mr. Hyde with the inherited gift with the ability to cause earthquakes via vibrations, and later became a S.H.I.E.L.D. agent. Acting as Nick Fury's loyal right-hand, she was forced to leave the agency when Maria Hill replaced Fury following his war against Latveria. Later going by the codename "Quake", Johnson would become the leader of the Secret Warriors, the Warriors, and has been a member of the Avengers and Force Works.

Since her debut, Quake has appeared in numerous media, such as in the Marvel Cinematic Universe's tv series, Agents of S.H.I.E.L.D., where she was portrayed by Chloe Bennet.

She was created by Brian Michael Bendis and Gabriele Dell'Otto, and first appeared in Secret Wars #2 in July-May of 2004.

Daisy Louise Johnson was born in New Orleans, Louisiana to scientist turned criminal Calvin Zabo and Jennifer Kim, with the latter having a Inhuman lineage. Due to Zabo mutating his DNA before taking his formula, Daisy's genes (alongside her Inhuman lineage on her mother's side) kickstarted her powers to manipulate vibrations. After her birth, Daisy was given to adoption by her mother to Gregory and Janet Sutter, who later gave her the name "Cory Sutter". When she was a teenager, Daisy's powers awakened after stealing, and she was brought into S.H.I.E.L.D. custody for questioning.

She was interrogated by S.H.I.E.L.D. director Nick Fury, who revealed her true lineage and decided to train her in the agency so she could control her powers. Johnson agreed and became one of Fury's most loyal officers within S.H.I.E.L.D., and remained at his side even after he defected for starting a war against Latveria. When Fury was replaced by Maria Hill as the agency's director, Daisy was forced to retire. Afterward, Johnson assisted the Avengers in fighting the mutant Magneto, where she used her vibrations to knock him unconscious via his own helmet, and later helped Fury stop the Skrull invasion. Fury would later reveal to Daisy that Hydra was controlling S.H.I.E.L.D., and tasked her with stopping them.

During the "Siege" storyline Daisy worked with the Avengers and the splinter teams, the Secret and Young Avengers, to stop Norman Osborn, and later Sentry. Afterward, Quake worked on traveling to Sweden to stop Sin, and unknowingly rescued Captain American and his team, as they were in Sin's headquarters fighting Master Man. Rogers would thank Johnson by having her become the new director of S.H.I.E.L.D. when he decided to reactivate the agency, and she would also become a member of the Avengers. Once the group stopped Norman Osborn from obtaining H.A.M.M.E.R., she would try to help the Avengers stop the Phoenix Force and then the Phoenix-Five. Despite failing to stop the Phoenix, Johnson would apprehend the X-Men for questioning.

When Quake needed the founding Avengers for a mission, she learned that Captain America was on a mission for the Microverse. Daisy met with Hill, whom proceeded to critique the former due to her exercising her authority to do as she please. The Avengers did return in time to reach Johnson and Hill in Central Park, but they had to battle the tyrant Lord Gouzar. Afterward, Johnson was tasked with assisting the Secret Avengers in killing Andrew Forson, which resulted in her losing her position in S.H.I.E.L.D. due to Forson being the leader of the United Nations. Before the U.N. could interrogate Johnson, she decided to have her memories of her time in S.H.I.E.L.D. wiped, and went into hiding before working with Winter Soldier and Mockingbird. 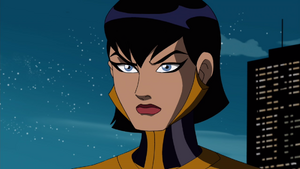 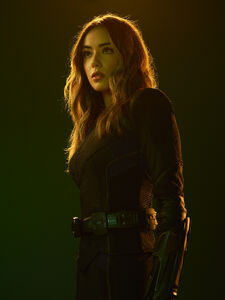 Chloe Bennet as Daisy Johnson in Agents of S.H.I.E.L.D.