Heroes Wiki
Register
Don't have an account?
Sign In
Advertisement
in: Articles under construction, Marvel Heroes, Avengers Heroes,
and 9 more

Daisy Johnson, also known as Quake is a character from the TV Series The Avengers: Earth's Mightiest Heroes.

She is a member of the Secret Warriors, working with Nick Fury on a secret operation to uncover the Skrulls. She possesses earthquake-producing ability which earned her hero name.

She also appeared during the final battle with the many heroes gathered by Captain America to stop Galactus.

She is voiced by Lacey Chabert.

Daisy Johnson generates powerful waves of vibrations which can produce effects resembling those of earthquakes. She is immune to any harmful effects of the vibrations. She also has or was given a form of psychic shielding.

She is also a superb hand-to-hand combatant, skilled all-around athlete, and excellent marksman. She was a leading espionage agent, adept at undercover assignments.

Her training under Fury enables her to target her seismic waves with pinpoint accuracy, causing targeted objects to vibrate themselves apart, from the inside out. This is shown in her being able to prevent the detonation of an antimatter bomb implanted in the body of Lucia von Bardas by destroying its power supply, and exploding the heart of Wolverine while in his chest, to halt an enraged attack on S.H.I.E.L.D. Director Nick Fury. 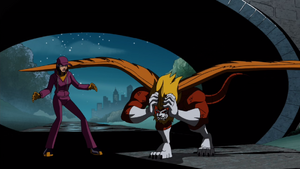