No information
Quatre Raberba Winner (カトル・ラバーバ・ウィナー Katoru Rabāba Winā?, derived from French quatre, lit. "four") is the pilot of the Gundam Sandrock, leader of G Team, and fourth of the five Gundams sent to Earth in Mobile Suit Gundam Wing. He is a central character of the anime and several of the derivative works that make up the After Colony universe. He is the youngest child and the only son/heir of Winner Household, with 28 (test-tubed) sisters older than him.

He is voiced by Ai Orikasa in Japanese and by Brad Swaile in English.

He first attacked a group of soldiers searching for his capsule; two still survive. Even though he offered them the chance to surrender, they still attempted to take him down, only to be bisected vertically.

He would them encounter Trowa Barton, and the two temporarily engage each other. Quatre was able to realize that they weren't enemies, and the two then form a friendship.

The two would meet the rest of the G Team in New Edwards. Trowa would almost involve Heero and Duo in the explosions of his missles. Trowa and Quatre take out a few of the Alliance troops holding up the defense line; after the mission was seemingly completed by Heero, Duo would retaliate against Trowa for a brief moment while Quatre tries to tell them to stop fighting. Wufei shows up later and delivers the scoop.

While Trowa and Wufei went off to pursue Treize, Quatre and the other two pilots remained at the New Edwards base, and two OZ soldiers try to self-destruct missles to eliminate the pilots while sacrificing their allies. Ex-Alliance Major Sally Po and her squad try to stop those OZ soldiers, who still push the button anyways. Quatre realizes the plot; when Duo suggests running away, Quatre explains why it wouldn't work. While Heero went to stop the explosion, Quatre and Duo take shuttles of their own.

Before his next mission, Quatre gets reprimanded by the Maguanac Corps for going out alone. The next day, they go out on the mission to stop the Taurus transports. They start by taking out some of the OZ units before locating a train. However, Quatre's machine gets knocked down and lands on the tracks; right before getting run over, Duo arrives just in time to pull the train away and save Quatre. However, he also realizes that the train route was the decoy, and Leos come out of the carrier to ambush them. When Lady Une threatens a colony, Quatre, like all the other pilots, stop fighting. When Dr. J orders Heero to self-destruct his machine and the latter goes along with it, Heero's apparent death leaves an impact on Quatre's feelings, and Trowa later tells him that they must fall back, which all the pilots do. 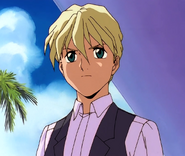 Add a photo to this gallery
Retrieved from "https://hero.fandom.com/wiki/Quatre_Raberba_Winner?oldid=1863650"
Community content is available under CC-BY-SA unless otherwise noted.