Heroes Wiki
Register
Don't have an account?
Sign In
Advertisement
in: Female, The Little Mermaid Heroes, Deceased,
and 35 more

Being with her husband.

Spread the joy of music throughout her family (succeeded).

Mother
Queen
Queen Athena was the wife of King Triton, and the mother of Ariel, Andrina, Arista, Aquata, Adella, Alana, and Attina. She is also Eric's mother-in-law and Melody's maternal grandmother.

She was the Queen of Atlantica, and beloved by her family and subjects. She was noted for her singing talent and her love of music.

She and Triton had been the best of friends ever since their childhood. Unfortunately, she died as a result of a run-in with a big pirate ship when Ariel was very young. A statue of her dancing with Triton is present in his courtyard.

Queen Athena is shown to be a beautiful mermaid with long, red hair tied in a partial pony tail, green eyes, and a bluish green tail. She wears a gold crown.

Of all her daughters, her youngest, Ariel, resembles her the most. This is most obvious in the original release of The Little Mermaid II: Return to the Sea, at least 23 years following the film's events, when Ariel has matured and become a mother herself.

It is possible that the animators of Athena based her appearance on the mature version of Ariel.

Athena appears at the very beginning of the film when her daughters were very young. She and Triton are shown to be very much in love. They are shown to share a special song (known as "Athena's Song"). They share the song with their daughters, and use it as a lullaby.

One day, they are relaxing in a cove with the princesses and some other merpeople playing fine music. They are celebrating their anniversary, and so Triton gives Athena a special music box that plays their song.

However, pirates soon approach the cove in a large ship, attack the merpeople, and snatch their instruments. Most of the merpeople escape safely, Triton escapes carrying Ariel, Arista, Aquata, and Adella to safety while Andrina and Alana dive into the water to swim to safety, but Attina, the oldest princess, gets her tail stuck between two rocks. Athena is able to free her in time, but she was crushed to death by the ship while trying to save the music box and the ship sinks after hitting the rocks.

Athena's death leaves Triton completely devastated. As a result, he tosses the music box in the ocean, bans music from the kingdom and raises his daughters very strictly because of evil and selfish mermaid Marina Del Rey.

However, Ariel and her sisters inherited their mother's love of and talent for music. Later on, Ariel references her at several points. When she learns of the Catfish Club, she sings a song remembering her mother and her love for music.

Later, when confronting Triton over his ban of music, Ariel points out that her mother wouldn't have wanted music to be banned from the kingdom. She had sacrificed herself to save them.

To honor the death of her mother Athena, Ariel finds her music box, but before she can give it to Triton and convince him to allow music back into the kingdom, the final battle begins when Marina carries the fishing net, bans Ariel from the kingdom and orders the eels to have her and Flounder eliminated before catching Sebastian. As a result, to make Athena happy, Ariel pushes Marina away, preventing her from trying to kill and crush Sebastian to death, and Triton allows music back into his kingdom and orders his guards to arrest Marina after Ariel recovers. 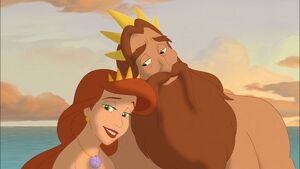 Athena and her husband Triton 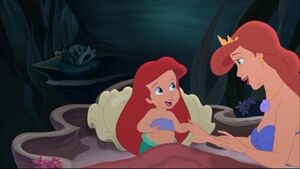 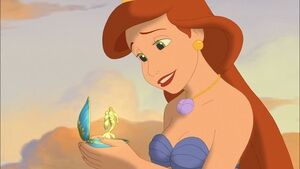 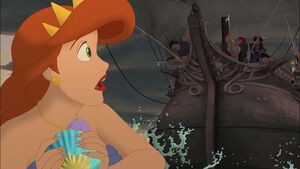 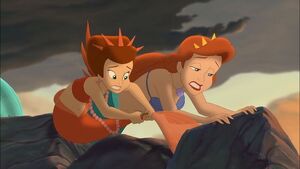 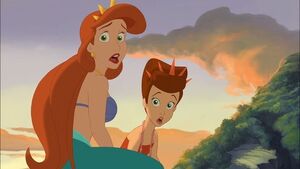 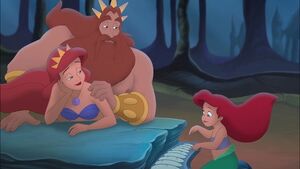 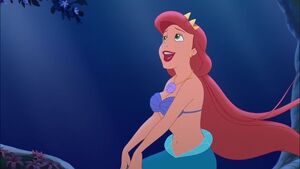 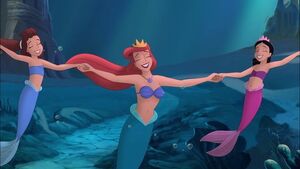 Athena smiles while holding hands with Aquata and Alana 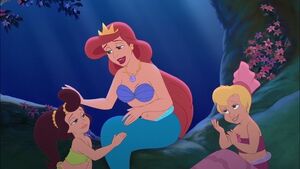 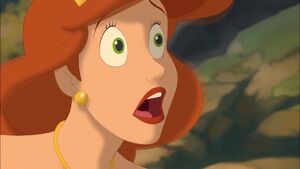 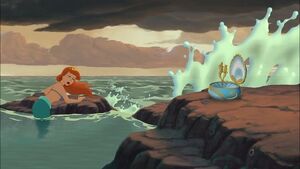 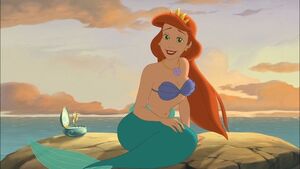 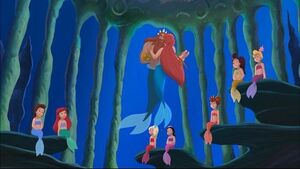 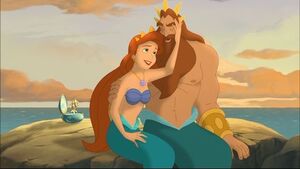