To keep Pixie Hollow and all of its fairies safe (succeeded)

Queen Clarion, formerly known as Reina or Ree, is a main character from Tinker Bell and the Disney Fairies franchise. She is also the beautiful queen of Pixie Hollow, she acts motherly to all fairies (especially Tinker Bell) and is prepared to do whatever it takes to make sure her fail residents live in peace and are well out of harm's way.

Queen Clarion is first seen greeting Tinker Bell upon her arrival, their she fixes her wings and helps determine her talent, eventually coming to the conclusion that she is a tinker fairy due to her fascination with various mainland objects and thus naming her "Tinker Bell". Tinker Bell excels at her duty, and presents several of her machines to Queen Clarion,hoping to be able to travel to the mainland. But Queen Clarion tells the young tinkerer that tinker fairies aren't supposed to travel to the main land, as that journey is reserved only for nature-talent fairies.

Disappointed about hearing the unfortunate news, Tinker Bell decides to change her talent, but fails in all of them. Eventually a fairy named Vidia reluctantly teaches Tinker Bell about becoming a fast-flying fairy by giving her (or rather tricking her) into capturing the sprinting thistles. As with the previous talents Tinker Bell fails to capture the sprinting thistles, but also unintentionally leads them to Pixie Hollow and wrecking havoc there. Queen Clarion calls off the changing of the season due to the disaster, causing Tinker Bell to feel guilty for her actions. She however creates several inventions that will help clean up the hollow in time to revive the changing of the season, she succeeds and becomes fond to her original talent. Queen Clarion acclaims Tinker Bell's inventions and rewards her with being able to travel to the mainland to return a music box that was left in the hollow to be fixed. Meanwhile, Queen Clarion also comes to learning that Vidia had tricked Tinker Bell into rallying up the sprinting thistles, thus making her responsible for the incident, thus as a consequence, she has her rallying the thistles again on her own.

Queen Clarion and the rest of Pixie Hollow are preparing for the Autumn Revelry, which marks the night of the blue harvest moon. When the blue harvest moon shines it light on the legendary moonstone, blue pixie dust is bestowed upon Pixie Hollow and the Pixie Dust Tree. Without the moonstone, the Pixie Dust Tree's power would slowly vanish. Tinker Bell was given the task to bestow the annual scepter used to collect the pixie dust, but destroys it in the process. Thus in order to prevent the loss of the blue pixie dust, she sets out to find a lost artifact called the Mirrorof Incanta, which can grant her one wish, which she planned to used to fix the scepter.

At the time of the Autumn Revelry, Queen Clarion is seen watching Tinker Bell present the Autumn Scepter (or rather the remnants of it) to the Minister of Autumn to prepare for the Blue Harvest Moon, to the Queen's astonishment, the shattered remnants manage to collect larger amounts of blue pixie dust than any of the intact scepters have. Even though Tinker Bell had shattered the scepter, Queen Clarion praise Tinker Bell for her honesty as well as managing to save the ceremony.

Queen Clarion makes a brief cameo announcing the opening of the Pixie Hollow Games and announcing Rosetta and her teammate Chloe as the winner of the games at the end.

Queen Clarion's biggest role occurs after Tinker Bell broke the border law by bringing a frost talent fairy from the Winter Woods to the warm regions of Pixie Hollow, the fairy (revealed to be Tinker Bell's sister Periwinkle) begins to deteriorate and become emancipated from the climate. The Queen arrives in time at the border where after Tinker Bell argues with the Winter Wood's ruler Lord Milori, Queen Clarion reveals that it wasn't him that created the border law, but in fact her. Lord Milori then reluctantly advises Tinker Bell that she and Periwinkle are not to see each other again for safety purposes.

Seeing that Tinker Bell was heartbroken due to not being able to see her sister again, Queen Clarion decides to tell the story behind why the border law was created: Many, many seasons ago, when Pixie Hollow was very young, two faires fell in love. One was a winter fairy, and the other was from the warm seasons. They were enchanted by one another but as their passion for each other grew stronger, they wished to share each other's worlds. So they disregarded the danger and crossed. One of them broke a wing, for which there is no cure. And so the two lovers had to bid each other farewell for the last time, it was for their own good. Ever since that incident, Queen Clarion had declared a law to forbid the crossing in between the two worlds, to which Lord Milori had agreed.

Eventually, the machine Clank and Bobble had created to produce snow so that Periwinkle would be able cross the border goes out of control and throws the seasons off balance, beginning a rapidly spreading freeze to head for the Pixie Dust Tree, which if covered, would never allow any fairy to fly again. In an act of defense, Tinkle Bell informs her sister Periwinkle and crosses the border once more. Periwinkle then collects several of her close friends and they begin coating the tree in a protective layer of frost that could absorb the freeze without any further consequences. However the task proves fruitless and when all hope seems lost, Lord Milori arrives with a squadron of snowy owls to further assist in protecting the tree.

After the task is done, and when the freeze begins its process of coating the tree, Queen Clarion asks Lord Milori if everything will be alright, to which Milori answers with uncertainty. She begins to shiver due to the spreading cold, so Lord Milori gives his cape to the Queen to help her and advises her to take shelter from the freeze. In doing so, she turns back and sees that Lord Milori has a broken wing, revealing that they were the two lovers from the story. Eventually, a ray of sunlight beams down onto the tree and begins thawing the ice, causing all the fairies to turn their attention to the Center of the Pixie Dust Tree, which soon enough erupts out golden pixie dust. Everyone cheers and celebrates that the process was a success and that the tree was saved, however the festivities are short lived when Tinker Bell reveals to her sister that she has suffered a broken wing due to crossing the border once more, and thus it cannot be cured. Feeling guilty, Queen Clarion apologizes to the tinker fairy, stating that this was all because of that law. Fortunately, the two sisters are able to repaired her wing after the two touch them together, and after seeing this miracle and the fact that the two sisters are now fully reunited once more, Queen Clarion then shares a kiss with Lord Milori as the two of them can now be with each other once again after so long.

Afterwards, Queen Clarion has the border law abolished, thus allowing fairies from both sides to cross freely for the first time in ages. Queen Clarion is last seen spending time with her lover as the rest of the fairies begin skating.

Queen Clarion is seen alongside her lover Lord Milori attending the Four Seasons Festival, to which she planned to see Tinker Bell and her friends perform. However, a mysterious fairy named Zarina sabotages the festival and steals the blue pixie dust, just before any of the fairies are able to stop her, all the fairies including Clarion fall asleep due to the poppies soporific pollen. She awakes after Tinker Bell and her friends return with the blue pixie dust and watch as each of Tink's friends preform in the opening ceremony.

Tinker Bell and the Legend of the NeverBeast

Queen Clarion is seen in the sixth main installment expressing concern of the conspiracy of the mythical NeverBeast returning and the dangers it potentially poses to Pixie Hollow. She asks Tinker Bell's reluctant friend Fawn alongside a scout fairy named Nyx to find out more about the creature before capturing it.

Queen Clarion is known to be very knowledgeable and powerful within Pixie Hollow, but despite these perks, she does not take her royal duties very seriously, although she can be stern at times. She is often very motherly towards other fairies, especially towards Tinker Bell. She also has a mysterious side to her as well.

Most of her onscreen duties include preparing for the turning of each season with the assistance of the Ministers of the Seasons, as well as greeting the arrival of new fairies to Pixie Hollow and helping them determine their magical talent.

It is implied in Tinker Bell and the Legend of the Neverbeast that she is possibly over one thousand years old in age. 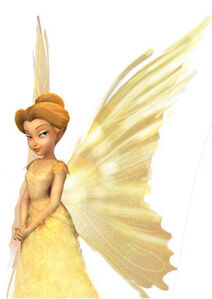 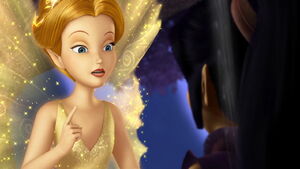 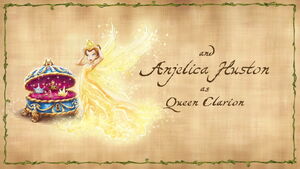 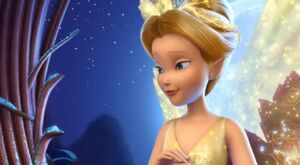 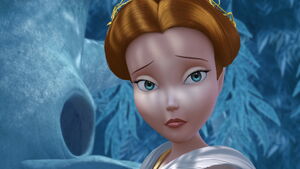 Retrieved from "https://hero.fandom.com/wiki/Queen_Clarion?oldid=2224884"
Community content is available under CC-BY-SA unless otherwise noted.