Queen Tyr'ahnee, also known as the Martian Queen, is the main antagonist-turned-heroine major character from the cartoon series Duck Dodgers, While a villainess, she has done many heroic acts, In fact she has agreed to help Duck Dodgers to save the earth and mars occasionally and at the end cease to have any longer hostility against Dodgers.

Tyr'ahnee has the appearance of a young woman with black skin, white hair, purple eyes, no visible mouth and a violet marking on her nose. She wears a golden bikini top connected to a big golden necklace, semi-translucent purple skirt with a golden belt and matching high heels.

Tyr'ahnee is somewhat snarking, affable and occasionally compasive, She is capable of alluring and using her charms towards others, However she is capable of doing the right thing and at the end of the series, she saves the earth and mars. 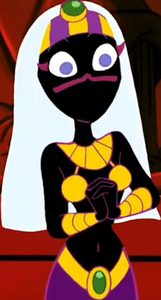