Mother (by her daughters)

Your Highness
Your Majesty

Frolicking with her pet Achid.

Collect food for Hopper and the grasshoppers (formerly).

The Queen of Ant Island refereed to in-film simply as The Queen is the mother of Atta and Dot and the quadrontagonist of A Bug's Life.

She was voiced by the late Phyllis Diller.

Prior to Atta coming of age, the Queen handled all the colony's food production oversight for the Grasshoppers as a form of protection/extortion. Due to an accident caused by Flik the excess food is destroyed before the Grasshoppers arrive and Atta is assumed an incompetent Queen compared to her mother. Despite the Queen's attempts to smooth things over The Grasshoppers place an unreasonable ultimatum on the colony that would leave them unable to gather food for themselves before winter sets in. Though The Queen plays little more than a side character in the film she is still a living Queen and seen by the colony as the center of their universe. The Queen's main contribution from the beginning of the film is strictly in an advisory fashion to her daughter as Atta tries to cope with the stresses and responsibilities of leadership.

At the end of the film, the Queen retires and Atta becomes the new queen with Dot becoming the heir to the throne. 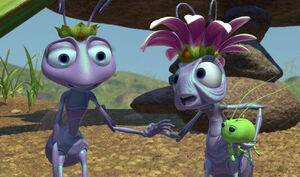 The Queen with her eldest daughter Atta 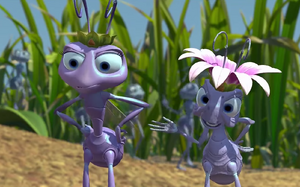 The Queen and Princess Atta scolding Dot for trying to fly too early, believing she's too young as well her wings are too small. 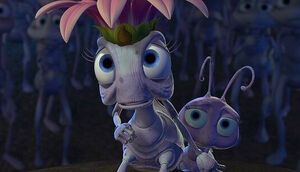 The Queen with her youngest daughter Dot 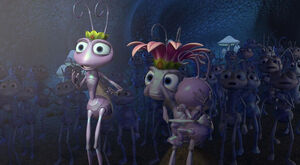 The Queen with her daughters 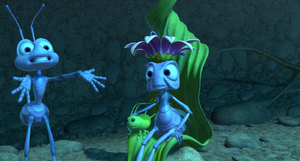