Qui-Gon Jinn is the overarching protagonist of the Star Wars franchise. He served as one of the two protagonists (alongside Obi-Wan Kenobi) of the 1999 film, Star Wars: Episode I - The Phantom Menace, the first film of the Star Wars prequel trilogy. He was a Jedi Master and the mentor of Obi-Wan Kenobi and also the first mentor of Anakin Skywalker until he was killed by Darth Maul towards the end of The Phantom Menace. He later appears as a posthumous character in Attack of the Clones, Revenge of the Sith and Star Wars: The Clone Wars, and also appears as a vocal cameo in The Rise of Skywalker.

He is portrayed by Liam Neeson, who also played Oskar Schindler in Schindler's List, Aslan in the Chronicles of Narnia films, Ottoway in The Grey, Darkman in the titular film, John "Hannibal" Smith in The A-Team (2010), Good Cop in The Lego Movie, Michael MacCauley in The Commuter, and Bryan Mills in the Taken trilogy.

Qui-Gon Jinn was the first who met Anakin Skywalker as a young boy and could sense the Force in him. At the time, he believed that Anakin was the Chosen One who would bring balance to the Force when Yoda, Obi-Wan, and the Council did not believe so.

He and Obi-Wan were entrusted with protecting Queen Amidala from the Trade Federation, who was secretly working for the Sith. He engages in battle with Darth Maul, twice: first on Tatooine and again on Naboo. His master Obi-Wan battles alongside Qui-Gon in the second lightsaber duel against Darth Maul. He wields a green lightsaber and was slain by Darth Maul.

The film opens when Qui-Gon Jinn and Obi-Wan Kenobi are sent to negotiate with Viceroy Nute Gunray of the Trade Federation. Unbeknownst to the Jedi, the Viceroy is secretly serving Sith Lord Darth Sidious, and tries to have them killed. The Jedi escape and sneak onto a warship and flee to the planet Naboo. There, they are attacked by the Trade Federation's battle droids. Qui-Gon saves a Gungan called Jar Jar Binks, who shows his gratitude by taking them to the Gungan city to speak with their high council, Boss Nass, even though Jar-Jar had been banished.

Qui-Gon uses the Jedi Mind Trick to get Boss Nass to offer them transportation and "sell" Jar Jar to them. The trio make their way to Coruscant, where they rescue Queen Amidala and escape Naboo to Coruscant. The Queen sends Qui-Gon, Jar-Jar, and her handmaiden Padmé (secretly the actual queen) on a diplomatic mission. A Federation ship attacks them, however, forcing to crash-land on the desert planet Tatooine.

They travel to the nearest town and find a mechanic shop. The shop is owned by a slave trader called Watto who owns Shmi Skywalker and her nine-year-old son Anakin. The boy tells Qui-Gon that he can win the money he needs to buy the parts to fix the ship by entering a podrace. Sensing something special about Anakin, Qui-Gon takes a blood sample from him and sends it to Obi-Wan to examine it. Obi-Wan finds that Anakin's blood contains a record number of midi-chlorians, a measure of strength and power in the Force. After learning from Shmi that Anakin had no biological father and can foresee the future, Qui-Gon becomes convinced that the boy is the "Chosen One" prophesied to bring balance to the Force.

Anakin wins the race, the parts are paid for and Anakin is now free. Anakin does not want to leave his mother behind, but she makes him go. On the way back to the ship, the two are ambushed by Darth Maul, Darth Sidious' apprentice. Anakin runs to the ship while Qui-Gon duels the Sith Lord. The match ends in a draw as Qui-Gon and Anakin escape onto the ship.

The ship reaches Coruscant and Qui-Gon informs the council that the Sith have surfaced for the first time in 1,000 years, and that he believes Anakin to be the Chosen One. The Council hesitantly agrees to examine Anakin and, though they are impressed by his abilities, they forbid Qui-Gon to train him, sensing great fear in the boy.

Qui-Gon, Obi-Wan, Anakin, and Padmé all return to Naboo and persuade the Gungan army to fight for them. Jar Jar leads the Gungan against the droid army in the meadows, Anakin leads the starfighters in a space battle, the queen and her guards sneak into the palace and Qui-Gon and Obi-Wan are left to duel Darth Maul.

Qui-Gon and Obi-Wan fight valiantly, but Maul stabs Qui-Gon with his lightsaber, mortally wounding him. Obi-Wan takes Qui-Gon's lightsaber and cuts Maul in half. With his dying words, Qui-Gon asks Obi-Wan to train Anakin, and Obi-Wan agrees. After Yoda dubs Obi-Wan a Jedi Knight, Obi-Wan tells him he will train Anakin, with or without the Council's permission. Yoda reluctantly agrees. Qui-Gon's body is burned in a pyre and mourned by everyone he knew.

Attack of the Clones

Ten years later, Qui-Gon's spirit watches from the netherworld of the Force as Anakin slaughters the tribe of Tusken Raiders who murdered Shmi; he calls out for Anakin to stop, but to no avail.

It is also revealed that Qui-Gon was once the apprentice of Count Dooku, who later joined the Sith and led the Confederacy of Independent Systems, a faction of planetary systems trying to secede from the Republic.

Towards the beginning of the Clone Wars, Yoda experiences a Force vision of a manifestation of Qui-Gon and a nine-year old Anakin on Dagobah. In the vision, Qui-Gon tells Anakin that he must face his fear by entering a cave strong with the dark side, and to trust in the Force.

During the war, Obi-Wan, Anakin and Anakin's apprentice Ahsoka Tano traveled to the mysterious planet of Mortis and encountered a family strong with Force-sensitivity consisting of the Father, Daughter, and Son. A ghostly apparition of Qui-Gon first appears to Kenobi and tells him of the family that, like himself, believes Anakin to be the Chosen One. Obi-Wan asks Qui-Gon what the planet was, and the spirit explains that the planet is a conduit through which the entire Force of the universe flows, being both an amplifier and a magnet. Qui-Gon then warns that, if Anakin is the Chosen One, the boy would discover it on Mortis, and if not then the planet would prove to be very dangerous for someone so powerful. Later Qui-Gon appears before Anakin, who is going to confront the Son. Qui-Gon guides him towards a place strong with the dark side and tells him to remember his training and trust his instincts.

Revenge of the Sith

Toward Revenge of the Sith, after the Republic has fallen and Anakin has become Darth Vader, Qui-Gon's spirit communicates with Yoda and offers to teach him and Obi-Wan how to retain consciousness after death and become a spirit in the Force. 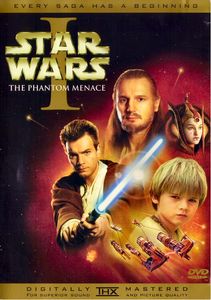 Qui-Gon on the Phantom Menace DVD 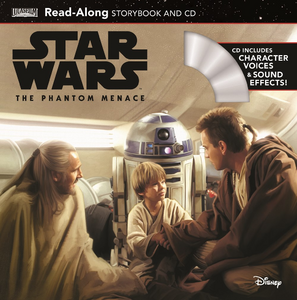 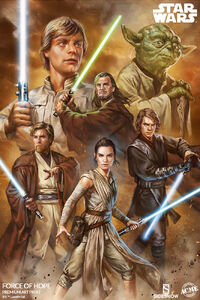 Qui-Gon believing the negotiation with the Trade Federation will be short due its members being cowards.

Qui-Gon and Obi-Wan waiting to meet with Viceroy Nute Gunray.

"I sense an unusual amount of fear for something as trivial as this trade dispute."

Qui-Gon and Obi-Wan ignite their lightsabers when they sense the destruction of their cruiser in the hangar.

When poisonous gas pours into the conference room, Qui-Gon and Obi-Wan hold their breath.

Qui-Gon using his lightsaber to cut a hole through the door to the bridge of the Droid Control ship.

When the bridge is sealed by blast doors, Qui-Gon uses his lightsaber to melt the doors down.

Qui-Gon coming to his apprentice's aid when droidekas appear to fight the Jedi. 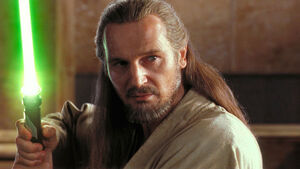 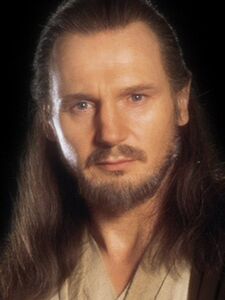 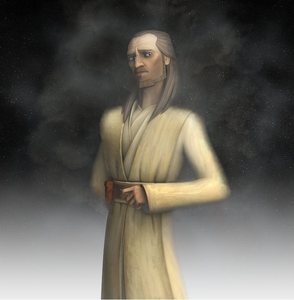