Daring Do fan of the first triology

Put arguments on the defensive
Cosplaying

Go with Rainbow Dash to find the Temple of Chicomoztoc and defeat Dr. Caballeon.

Be back in the convention (succeeded).
Prove that the new books of Daring Do aren't great (failed).

Quibble Pants is the central protagonist of My Little Pony for the episode "Stranger than Fan Fiction".

He is voiced by Patton Oswalt, who also voices Remy, Max and Professor Dementor.

Similar to Rainbow Dash, Quibble Pants is portrayed as an overenthusiastic Daring Do fan. While he is mostly friendly and excitable when it comes to the original book trilogy, he is overly cynical, sarcastic, and critical in regards to the later books, calling A. K. Yearling a sellout for dumbing down the series. He is also prone to long-winded rants. However, due to Quibble's intricate knowledge of the Daring Do series, he is able to improvise in dangerous situations and solve puzzles far more quickly than even Daring Do can.

Quibble Pants appears in Stranger Than Fan Fiction as an attendee of the Daring Do Convention in Manehattan. When first introduced, he is shown to be a huge fan of the Daring Do book series, even cosplaying as Daring and quoting pages of the series with perfect recall. He meets Rainbow Dash at the convention, and he is pleased to meet a fan who is as passionate about the series as he is.

However, as Rainbow gets to know him, Quibble is revealed to only be a fan of the original Daring Do trilogy, and he refuses to acknowledge the existence of the later books due to his skepticism of said books' realism. Because such an opinion puts him at direct odds with Rainbow's opinions, the two have a heated falling-out.

Later in the episode, Quibble Pants is dragged along with Rainbow Dash when they are captured by Dr. Caballeron under suspicion of working for Daring Do herself. However, Quibble believes the entire thing to be an act that Rainbow Dash orchestrated to prove his opinions wrong. After they escape from Caballeron and journey through a jungle, Quibble acknowledges the danger he is in, but he still writes it off as a performance with poor safety precautions.

When Quibble comes face-to-face with a monstrous Cipactli and meets the real Daring Do, he finally accepts everything happening around him as real, and he uses his knowledge of the Daring Do series to solve a treasure puzzle. In the end, while he still doesn't like the Daring Do books released after the original trilogy, he accepts the realism in them as well as Rainbow Dash's reasons for enjoying them.

His second and last appearance is in Common ground, when he want to have help from Rainbow Dash to impress his girlfriend and her daughter, since he doesn't really know anything about sport and really want her help to be a real sport fan so he can be a real father to his stepdaughter. 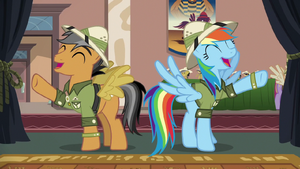 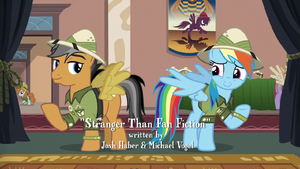 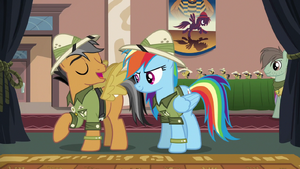 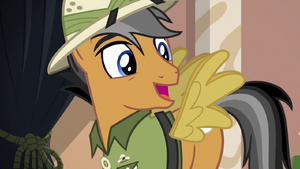 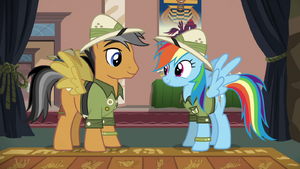 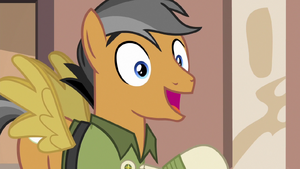 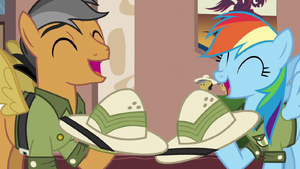 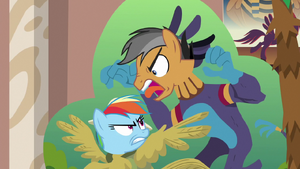 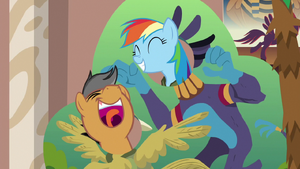 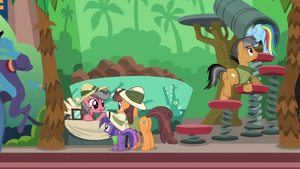 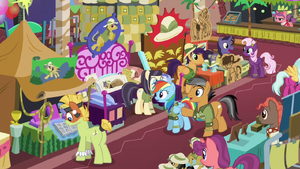 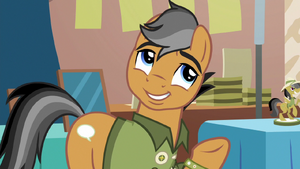 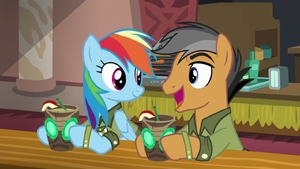 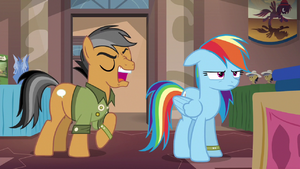 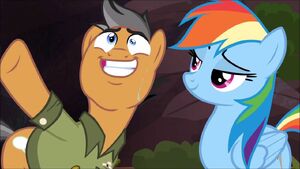 Quibble Pants amazed to Rainbow Dash for saving his life 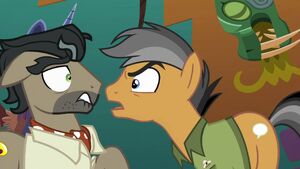 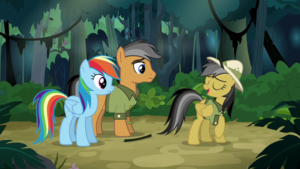 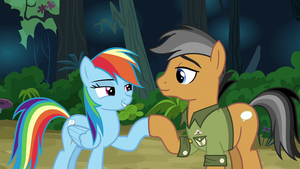 Rainbow Dash and Quibble Pants restoring thier friendship back