NOTE: This article is about the incarnation of Quicksilver from the Marvel Cinematic film series. The mainstream version can be found here: Quicksilver (Marvel).

Member of HYDRA (formerly)
Member of the Avengers

Helping The Avengers and protecting his sister.

Obey and Serve the orders and wills of Ultron (formerly).

Help Ultron to defeat and kill The Avengers (formerly).
Help The Avengers to stop Ultron's plans to destroy humanity (succeeded).

Pietro Maximoff, known also under the alias Quicksilver (1989-2015), is one of the two titular tritagonists (alongside Scarlet Witch) of Avengers: Age of Ultron, and a posthumous character in the WandaVision series.

He is the twin brother of Scarlet Witch, and was experimented by HYDRA under the leadership of Wolfgang von Strucker. The experiments with the mind stone gave Pietro the ability to move at superhuman speeds, as his sister gain the ability to control and manipulate psionics. After HYDRA was defeated by the Avengers, Pietro and Wanda joined Ultron to defeat the superhero team until the twins defected upon learning of Ultron's true intentions. During the Battle of Sokovia, Pietro sacrificed himself to save his teammate Hawkeye, and his death was avenged by the heroes by stopping Ultron's plans.

Hawkeye honored his sacrifice by naming his infant child Nathaniel Pietro Barton, and Wanda continued to serve the Avengers until their civil war. During the Westview incident, Pietro was impersonated by Ralph Bohner while enthralled by Agatha Harkness, who made Ralph get close to Wanda to learn how she created the hex.

In Avengers: Age of Ultron, he was portrayed by Aaron Taylor-Johnson, who also played Kick-Ass in the titular films, and Ford Brody in the 2014 film, Godzilla. Gabriel Gurevich played the character younger in the Disney+ tv series, WandaVision.

He is the twin brother to Scarlet Witch, and after being experimented on by HYDRA, was given the ability to move at superhuman speed. Though originally a villain under the servitude of Ultron, Pietro redeemed himself by joining the Avengers to stop Ultron from destroying Sokovia.

"Wanda and Pietro Maximoff, twins. Orphaned at ten when a shell collapsed on their apartment building. Sokovia has had a... rough history, it's nowhere special but it's on the way to everywhere special."
―Maria Hill and Steve Rogers on The Twins.

Pietro Maximoff was born in the Eastern European country of Sokovia along with his twin sister, Wanda. At the age of ten, while having dinner with his family, a mortar shell hit their apartment building, killing Maximoff's parents and trapping him and his sister. A second shell hit the apartment near them but did not go off; the Maximoff twins were left trapped for two days staring at the unexploded shell reading the name on it, Stark Industries. This traumatic experience gave the twins a great hatred for America, especially Tony Stark and later the Avengers. They often took part and led protests against the Avengers. They dedicated much of their lives to his hatred and began searching for ways to bring down the Avengers; this constant political activity put them on S.H.I.E.L.D.'s radar.

"Be strong, sister. It won't be long before we have the power we need to fight."
―Pietro Maximoff to his sister, Wanda.

When the twins reached adulthood, foreign powers began occupying Sokovia, driving the country into a state of turmoil. Pietro and Wanda took part in frequent riots to drive the foreign forces from their streets. What the twins did not realize was that the riots were orchestrated by HYDRA, who had taken up residence in the country and were using the riots to cover up their illegal experiments. The leader of the HYDRA forces in Sokovia, Wolfgang von Strucker, was attempting to harness the energy from the Scepter for a variety of uses, such as powering up weapons of mass destruction.

List, desiring to see what effect the scepter's power would have on live humans, approached several Sokovian rioters, including Wanda and Pietro, offering them the opportunity to achieve the power needed to free their country from war. While Wanda expressed some doubt over Strucker's claims, Pietro was determined to free Sokovia and convinced his sister to accept.

While the other volunteers did not survive the scepter's power, Pietro and Wanda experienced drastic changes. The scepter unlocked latent supernatural powers within the pair; while Wanda developed a number of mental powers such as telekinesis, hypnosis, and energy projection, Pietro was now able to move at superhuman speed.

Soon after, the Avengers arrived in Sokovia and raided the HYDRA Research Base, stealing the scepter and arresting Strucker. In the confusion, Wanda and Pietro escaped from their holding cells and, though inexperienced, were able to use their powers to evade the Avengers and escape. Pietro himself used his powers to distract Hawkeye and Captain America, using his speed to try to stop their advance and to protect a bunker, which was destroyed by the Hulk soon after.

"Yeah, you better run."
―Hawkeye to Pietro after he saves Wanda

Wanda and Pietro were soon called by Ultron to join him in his plans to destroy the Avengers, knowing that with their powers, they could tear the opposition apart. Soon after, Wanda and Pietro accompanied Ultron in acquiring Ulysses Klaue's supply of vibranium. When the Avengers arrived, Pietro attacked Captain America, then Thor, trying unsuccessfully to use Mjølnir against him. When Wanda attempted to "hex" Hawkeye, but was subdued by him, Pietro saved her in the nick of time. He took her outside Klaue's base, where she caught sight of the Hulk and managed to "hex" him as well.

Betraying Ultron and Joining The Avengers

When the Twins arrived in Seoul, Wanda learned of Ultron's plans upon touching the Cradle and they left the facility, much to Ultron's rage. The Twins then assisted Captain America in fighting off Ultron on a moving passenger train. Wanda managed to stop it when it went off the rails, while Pietro used his super speed to save people on the road of the train. The Twins then accompanied Captain America back to Avengers Tower and tried to stop Tony Stark and Banner from bringing Vision to life. Pietro succeeded to cut off the electricity from Vision's cradle, but he was soon attacked by Hawkeye, only to witness Thor bringing Vision to life. After Vision proved himself an ally to the Avengers, he and Wanda then joined the Avengers in stopping Ultron and saving Sokovia.

Seeing that Ultron wanted to cause a cataclysmic event, Pietro and Wanda assisted the Avengers in evacuating the citizens of Sokovia. While helping people evacuate, Quicksilver battled against Ultron's army while also witnessing the villain raise Novi Grad into the sky. Seeing that he had no time to waste, Pietro protected Wanda and Hawkeye from Ultron's army, and later assisted his teammates in protecting the key from Ultron. With the power of Vision, Iron Man and Thor, Ultron's new body was weakened, and the Hulk then punched Ultron away from the city.

During the Battle of Sokovia, Ultron hijacked the Avengers' Quinjet and began to fire its guns at civilians. Pietro bravely used his powers to save countless lives. When Ultron targeted Hawkeye and a civilian boy, he used his own body to shield them from the Quinjet's powered minigun, proving he was a true hero and a true Avenger. Unfortunately, Pietro died from his wounds, much to his sister's sorrow.

In honor of his sacrifice Hawkeye and his family decided to name their newest son Nathaniel Pietro Barton.

After the blip, Wanda still felt grief for losing her brother, which was exploited by the witch Agatha Harkness. Agatha enthralled Westview citizen Ralph Bohner to impersonating Quicksilver to get information on how Wanda created the hex.

Pietro is a rather cocky, arrogant, impatient, tenacious, and quick-tempered person. These personality traits are likely a side affect of his super-speed, due to thinking and acting at a much faster rate than most. Despite this, Pietro has a desire for peace as he wished to save his country to the point he was willing to be experimented on by HYDRA, giving him the formidable powers he now possesses.

He also deeply cares for Wanda and the two shared a deep bond though they would occasionally bicker like normal siblings. He looked after his sister and relied on her for support. Wanda was devastated by Pietro's death at the hands of Ultron, to the point she said to Ultron that she just 'died'.

Pietro originally desired to destroy the Avengers and in particular, Tony Stark for revenge, to the point they decided to join Ultron when he said he shared the same goal. However, Pietro chose to betray the A.I. when he found out about his true goal, showing that he is willing to put aside his personal grudges for the greater good.

Out of his relationships with the Avengers, his most complicated was with Hawkeye. Ever since they first met, the two had constantly competed, fought, and taunted each other. Though this initially started out as hatred, their relationship eventually becomes a friendly rivalry and they became good friends and teammates through Pietro helping the Avengers, while still continuing their friendly banter during the Battle of Sokovia. He later proves himself a true hero and Avenger by sacrificing his life to protect Hawkeye and a civilian boy from the Quinjet's gunfire. Hawkeye later named his newborn son, Nathaniel Pietro Barton, showing that he deeply respected Pietro for his choices.

Young Pietro with his sister Wanda, having survived the bombing. 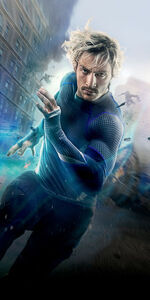 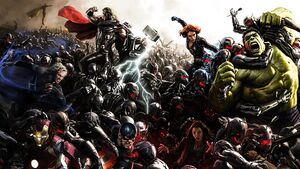 Concept art of Quicksilver fighting Ultron Sentries with the Avengers. 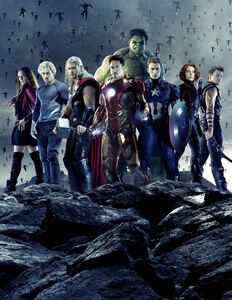 Quicksilver and Scarlet Witch with the Avengers.

Quicksilver and Scarlet Witch being betrayed by Ultron. 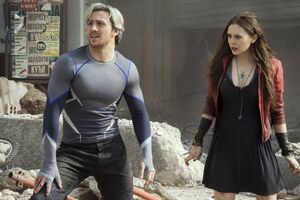 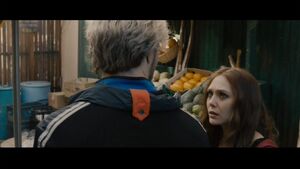 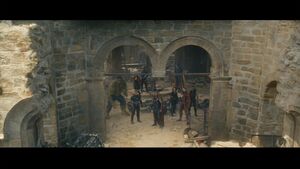 Quicksilver with the Avengers. 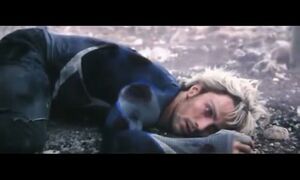