Help Wolverine, Professor X and Beast to find Magneto in order to stop Mystique from killing Bolivar Trask and prevent the war in the Sentinels (X-Men: Days of Future Past).

Help the X-Men stop Apocalypse from wiping out the entire human race (X-Men: Apocalypse) (all succeeded).
Reveal to Magneto that they are related (formerly)

Peter Maximoff, also known as Quicksilver, is a recurring superhero in the X-Men film series, appearing as a supporting character in Days of Future Past, Apocalypse and Dark Phoenix.

Peter Maximoff was born sometime in the mid-1950s as a result of an affair between Ms. Maximoff and the mutant Erik Lehnsherr. In 1977, Peter participated in track and had gone so fast that he broke world records. Suspicion arose that he might be a mutant and he was caught being a mutant. Trask Industries then created a system of detecting the x-gene and thus, he was kicked off the track team as mutant track runners were banned.

When Wolverine is sent back in time to the year 1973, he goes with Charles and Hank to the Maximoff house and they meet Peter who is in the basement goofing around with the stuff that he has. They four of them chat until Wolverine convinces him that if he comes with them, he gets to break into the Pentagon where they plan to break out Magneto. He sneaks in and manages to locate Magneto's cell and break him out. He then regroups with Wolverine and the others where they head into a kitchen, only to be caught and surrounded by Pentagon security guards.

He then uses his powers and deflects all of the bullets while also knocking out the guards and allowing the others to escape. Afterwards, Hank finds a plane and they all go one it except Peter who is left behind and returns home. Back at home, he relaxes until Magneto's attack on Washington D.C. where he surrounds the White House with a baseball stadium, takes over the Sentinels, and then broadcasts a live message to the world calling for mutants to rise up and for there to be a brotherhood as well. He also realized that Magneto was his father but was unable to process the facts before Wolverine and the others left.

Obsessed with finding his father, Peter spends the next ten years trying to find him and even comes across his home in Poland but is too late, as Erik has fled once more. He then returns home on the 10th anniversary of Magneto's attack on Washington D.C. and decides to head for the X-Mansion in search of answers. Upon arriving, he finds the mansion being destroyed and thus saves everyone with his superspeed except Havok who was too close to the explosion and was the first (and only) one to be killed off. Soon help arrives as a helicopter lands claiming to be medical aid. Soldiers walk out and it's soon revealed to be Colonel William Stryker who has all of the mutants knocked out and has Quicksilver, Mystique, Moria, and Beast all captured and brought back to a Weapon X facility in Canada.

They all then wake up inside a prison cell where Peter tells Mystique that he's actually the biological son of Magneto. Cyclops, Jean, and Nightcrawler then come in and rescue them after Wolverine is let loose and goes on a killing spree and slaughters all of the guards and staff in the facility (except Stryker who escaped). Quicksilver then suits up with the rest of the X-Men as they all fly to Cairo, Egypt where the powerful mutant, Apocalypse, is preparing to destroy civilization and rebuild the world in his image. The X-Men then arrive and engage his horsemen in battle and after most of them are defeated, Quicksilver uses his powers and punches Apocalypse who is stuck in time as a result of his powers but he overcomes this and injures Peter. Apocalypse is eventually killed and he then joins the X-Men as an official member.

Peter is first seen with The X-Men as they attempt a mission to rescue astronauts from a damaged space shuttle. During that mission, Peter helplessly watches as Jean is struck by the energy. Miraculously, she survives the blast and absorbs the energy, saving her team's aircraft from destruction. Peter however becomes severely injured after battling Jean Grey alongside the rest of the X-Men after she loses control of her powers.

When Deadpool blew himself up after blaming himself for the death of Vanessa Carlysle, Colossus brought him to the X-Mansion to recover. While there, Deadpool began complaining that he never saw other X-Men around the mansion apart from Colossus and Negasonic Teenage Warhead. While ranting, Deadpool was unaware that Professor X, Cyclops, Storm, Nightcrawler, Beast, and Peter himself were in a room behind him. Beast quietly closed the door so that he did not notice them.

Peter is a kleptomaniac who has a hinted reputation for stealing. It is also assumed that he has ADHD (attention deficit hyperactivity disorder) due to his hyperactive nature. He is very sarcastic and witty, and is described as a "pain in the ass" by Charles Xavier. His personality compliments his power, he's very outgoing and hyper. Peter's wit is notable as he is constantly making jokes for either his own amusement or to comfort his friends and teammates as shown when they all went to battle Apocalypse and Maximoff made fun of himself on how he still lived with his mother even though he was an adult much to the others amusement and lightening the mood before their battle.

Quicksilver in X-Men: Days of Future Past. 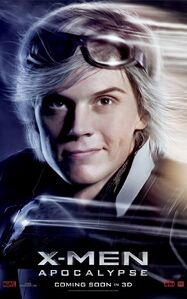 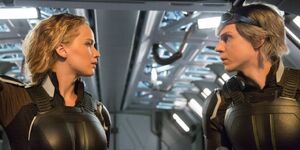 Quicksilver with the X-Men in the Danger Room. 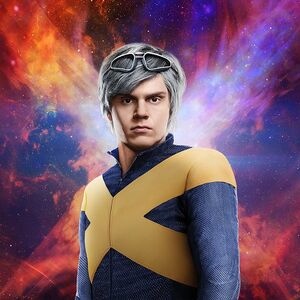