Morally Conflicted Knight
Quinlan Vos was a Kiffar Jedi Master in the Jedi Order and a General in the Grand Army of the Republic during the Clone Wars. He hailed from the planet Kiffu in the Inner Rim Territories. With long, dreadlocked hair and a band of pale yellow across his upper face, Vos was gifted with psychometric powers which allowed him to "read memories" from inanimate objects through physical contact.

Vos had an ongoing struggle with the dark side of the Force, particularly after he sustained recurrent amnesia after he overdosed on an illegal drug administered by an enemy shortly after the Battle of Naboo. The Sith Lords Darth Sidious and Count Dooku both showed an interest in him.

He was a prominent participant in the Clone Wars, one of the few survivors of the Great Jedi Purge and, with his lover Khaleen Hentz, conceived a son named Korto Vos.

Though Quinlan Vos was a good Jedi in many ways, he suffered an ongoing struggle with the dark side that continued long into the Clone Wars. He was consumed by hatred for his great aunt, Tinté Vos, after discovering that she had sacrificed his parents to Anzati vampires, and he eventually murdered her in cold blood, completing his fall to the dark side.

Having committed many evil acts during his time as Dooku's Dark Acolyte, Vos yet managed to convince his old friend Obi-Wan Kenobi that he still served the Republic, and he helped Kenobi escape from both Tol Skorr and Asajj Ventress. Vos was very mindful of his cover as a Dark Acolyte, sacrificing a childhood friend, Shylar, so that he wouldn't reveal his identity. Even so, Quinlan blew his cover by rescuing his great aunt, whom he shortly thereafter killed. Having waged long war with his inner demons, Vos displayed great strength of character by ultimately overcoming the dark side during the Clone Wars.

Against the strict mandate of his Order, Quinlan fell in love with Khaleen Hentz and at the end of the Clone Wars became her husband and the father of their child, Korto Vos. Quinlan also forged an intimate Force bond with Aayla Secura, who once said that he had been like a father to her. Vos had a rather sarcastic sense of humor. When he faced Tsyr and Bok on Kintan, for example, he said that the two of them against him—who was wounded at the time—was unfair, before asking if it would be easier for them if he closed his eyes. Quinlan was openly disdainful of clone troopers, who in turn disliked him, but he was loathed by Sergeant Kal Skirata. Despite this general mutual enmity, Vos was civil, if not friendly, towards Commander Cody.

Born into Clan Vos, the ruling bloodline of the planet Kiffu, Quinlan Vos was the Force-sensitive son of Quian and Pethros Vos, members of Clan Vos, the rulers of Vos's homeworld of Kiffu. Vos was born with psychometric powers, and thus destined to become a Guardian like his parents. Most Kiffar had psychometric ability to some degree, but Vos's latent ability with the Force enhanced his own, and he was considered by many to be the best exemplar of that ability that had ever lived.

Initially, Vos's people were unwilling to give him up to the Jedi Order, as that would require him to relocate to Coruscant, cutting him off from his homeworld. As a compromise, Jedi Watchman Tholme agreed to train Vos initially on Kiffu.

This changed, however, when both of Vos's parents were murdered by Anzati. Vos's aunt, Tinté Vos, then forced the boy to use his abilities to read the memories implanted in his deceased mother's medallion. Vos cried out in terror for days, reliving the nightmare of his parents' deaths, and only Tholme was able to calm him. Knowing that Quinlan would never be safe on his homeworld, now that his aunt had become its ruler, Tholme took the boy back to Coruscant and presented him to the Jedi Council, who agreed that he should enter into regular Jedi training.

As a youngling, Quinlan trained alongside other Jedi hopefuls such as Siri Tachi, Bant Eerin, Shylar, and Obi-Wan Kenobi. He trained under the watchful guidance of Jedi Master Tholme.

As a young apprentice, Vos was responsible for saving the life of the child Aayla Secura from the rogue wampa guard of a Hutt crime lord during a mission to Ryloth with Master Tholme, in 46 BBY. Through the Force, Vos immediately felt a strong connection to Secura, who was being concealed amongst slaves for her protection. Sensing she was in danger, Vos rushed to her rescue. Vos was able to communicate with Secura through the Force and together they defeated the rampaging wampa. Vos persuaded Master Tholme to test Secura for Jedi training on Coruscant, where she passed the tests and later became Vos's own Padawan.

Padawan Vos also fought beside his master in their mission to Thyferra and in the Stark Hyperspace War, where he met and became friends with fellow Padawan Obi-Wan Kenobi. When the war was over, Tholme went away for a while, leaving Vos with Kenobi and Qui-Gon Jinn on Ragoon VI to complete a survival-training mission. While trying to show off and best each other with different moves, Vos accidentally tumbled into the water. Kenobi jumped in to rescue him, but both were saved by Jinn, who called upon the Force to lift them from the vortex of churning waters in which they'd become trapped. Vos recalled later that, as he was drowning, it had seemed easier to just let go, to surrender himself to "a comfortable and very familiar darkness."

Also during his apprenticeship, Quinlan had a romantic relationship with fellow Padawan Shylar. They eventually ended it, knowing the Jedi Code forbade such attachments. This relationship would come back to haunt Vos during the Clone Wars.

In 32 BBY, Vos was on Tatooine on an undercover mission, at the same time Master Qui-Gon Jinn found himself temporarily stranded there. While both Jedi were in the settlement of Mos Espa, Vos witnessed an early meeting of Jinn and Anakin Skywalker, who Jinn would soon come to believe was the Chosen One. Secura, who, as a 16-year-old Padawan, was working with Vos on Tatooine, later told the Jedi Council that she and Vos heard about his death just before they left the planet. She reported that Vos regretted not revealing himself or contacting Qui-Gon, that if he had been aware of Jinn's plight, he would have undoubtedly aided him in reaching Coruscant.

A year after the Invasion of Naboo, Vos suddenly found himself inside of a burning building on Nar Shaddaa, with no memory of who or where he was, nor what he had been doing. He was able to escape to the roof, encountering a small group of bounty hunters upon doing so. Acting instinctively, he Force pushed them off the edge, sending them to their deaths. Diving into one of Nar Shaddaa's many dark alleys, Vos encountered Vilmarh Grahrk, a Devaronian smuggler. Using a commandeered speeder bike, the two managed to find a place to hide, avoiding assassins at every turn. Villie, as he liked to be called, explained to Vos that the local criminals had made bets based on how long Vos would survive on Nar Shaddaa, knowing of his Jedi origins and his amnesia. Once they were safe, Villie put his blaster to Vos's head and pulled the trigger, but it turned out that Vos had switched the weapon's power cell, his powers having forewarned him of Grahrk's betrayal.[15]

Vos kicked Grahrk to the ground and, after grabbing the blaster and switching its power cell once again, demanded Grahrk tell him everything he knew, or he would kill him. Before he could do so, two beings carrying lightsabers walked into the room, claiming to be Jedi. Grahrk told him that they were in fact "bad boys," and with that the two attacked. Vos instantly killed one with Villie's blaster, then grabbed his downed opponent's green lightsaber.[15]

As it touched his hand, visions suddenly flowed through his mind, including that of his Padawan, Aayla Secura, and his own name. With a great deal of his power returned to him, he quickly killed the other lightsaber-wielding foe, a Gotal. Villie revealed that, while Vos was killing the fake Jedi, he had made a new bet: that he would get off Nar Shaddaa alive. After being convinced to go with Grahrk, Vos grabbed the other lightsaber which he could sense belonged to Secura. With that, the two began their trek off the Smuggler's Moon.

On the way, Vos encountered more intense visions; of Tatooine, Bib Fortuna, Tinté Vos, and glitteryll, primarily. After learning Grahrk knew of Bib Fortuna and his possible whereabouts, Vos quickly convinced him to help find the Twi'lek and, knowing they could never leave the moon until doing so, Grahrk agreed. Vos and Grahrk located the Twi'lek, and the Jedi asked Fortuna aggressively what glitteryll was. Bib only revealed that "someone in a high position on Coruscant" was behind it all before a group of guards burst into the room.

Vos and Grahrk quickly dispatched the guards, though Fortuna was able to escape during the melee. After the emergence of a droideka, the two escaped through a window, stealing Bib Fortuna's parked speeder, and immediately made their way to Grahrk's ship, the Inferno. Upon arriving to the ship's docking bay, Vos discovered Grahrk had failed to mention he lost the ship in his recent betting on Vos's possible demise, so the ship now had security droids surrounding it, conveniently forcing Vos to help Grahrk regain his ship. Upon entering the ship, Vos and Grahrk were not allowed to take off due to the Inferno's onboard navigation droid, NT 600, correctly claiming that Grahrk was no longer the owner. With annoyed bounty hunters and gamblers fast approaching, Vos quickly told the droid that activating the ship's shields would "protect the new owner's investment." Agreeing with this logic, NT activated the shields, though they began deteriorating instantly due to an ion cannon-wielding bounty hunter firing upon it. A Quarren named Gorzima suddenly came on-screen, accusing Villie of stealing back the Inferno. Vilmarh promised that he would simply fly the Inferno off-planet, collecting his soon-to-be winnings due to Vos escaping Nar Shaddaa, and allowing himself to buy the Inferno back. Gorzima disagreed, but Vos was able to persuade him, allowing the two to fly away from Nar Shaddaa.

Grahrk transferred his new-found credits to Gorzima once out of the atmosphere. With Vos not being sure where to go next to fill out his memory a bit more, Grahrk reasoned that the best place would be where he was born. So, NT 600 scanned the Jedi and discovered that he was a Kiffar from the planet Kiffu. After granting him transport to his homeworld, Grahrk stayed behind on the Inferno, allowing Vos to seek out his past, and perhaps learn a little more about himself.

On his home planet, Vos met with his aunt, Tinté Vos, the Sheyf of Kiffu and Kiffex. Though she shunned the Jedi, as well as Quinlan Vos's Padawan Aayla Secura, she told him that a few weeks ago he and Secura had come to Kiffu to learn of a drug called glitteryll. She said that it was a combination of glitterstim and ryll, that the Corporate Sector Authority was interested in it, and that he and Secura had investigated the matter on Nar Shaddaa and Tatooine. She also echoed Bib Fortuna's statement on Nar Shaddaa that someone high up on Coruscant was behind it all. She told him to go to Ryloth to seek information, and his Padawan. 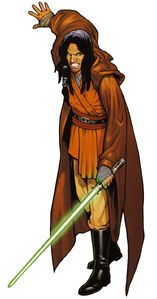 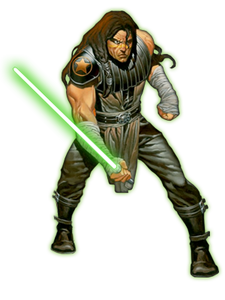 Quinlan Vos in The Clone Wars 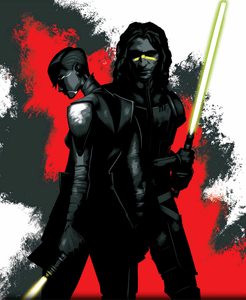