R-Type is a series of playable space fighters in every installments of horizontal scrolling shooters of the same name. This term is a generation of R-Series which is used to combat the misanthropomorphic forces during the war against the dangerous biological alien faction called the Bydo Empire. As in the original appearance, for example, the first variant was R-9A Arrowhead, a spiritual predecessor that later develops the evolution of the next generation of spacecraft.

The series of starfighters were first developed by the Space Corps, a largely mysterious space federation who behaves in a similar role as the United Nations, only spread out further throughout space. In order to preserve the peaceful natures of its territory, they designed small yet effiencent and complex starfighters under the name R-Type to help fend off hostile invading forces such as the Bydo Empire.

The first of these crafts was the R-9A Arrowhead, which while effective was later succeeded by other models in later installments, each with new weapon capacities (although the R-9A remained in service).

Each craft consists of a maneuverable weapon/shield known as a Force Device, which fires simultaneously with its respectful spacecraft. The device can also be attached to the head fighter should the craft come in contact with the device, enabling stronger firepower and providing minimal protection to the front or back of the fighter from weak enemy firepower. The device can also be launched from the craft to allow firepower in hard-to-reach areas. The device typically grow larger (and thus increases the firepower) with each power-up obtained by the starfighter.

The main craft also features a chargeable weapon known as the Wave Cannon, which can penetrate through multiple Bodo crafts as well deal serious damage to bosses. The Weapon is later altered in successor crafts to be able to charge up twice to allow an even more powerful shot to be fired, usually in the form of either smaller seeking shots or one colossal shot roughly twice the size of the main craft. 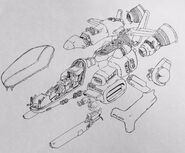 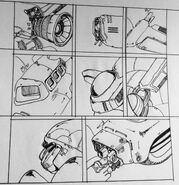