To seal away Slappy and his minions (partially succeeded twice and ongoing).

R.L. Stine is the overarching protagonist of the Goosebumps franchise and movie series. He is based on the real-life author of the same name.

Stine is portrayed by Jack Black, who also voices of Slappy the Dummy and The Invisible Boy in the first film. Black also portrays Dewey Finn in School of Rock, Nacho in Nacho Libre, Lemuel Gulliver in Gulliver's Travels, and Professor Shelly Oberon in Jumanji: Welcome to the Jungle and Jumanji: The Next Level, and voices Lenny from Shark Tale, and voiced Po for the Kung Fu Panda franchise.

R.L. Stine lives with his teenage daughter, Hannah, in an old house and has written the Goosebumps books. It is his mission to ensure all the monsters he created are sealed up tight in the manuscripts, which is why he warns others to stay away from his home. But when a teenage boy named Zach Cooper moves in, the books are unlocked. All of the Goosebumps villains, ranging from the Werewolf of Fever Swamp and the marauding Lawn Gnomes all the way to the nefarious Slappy the Dummy, are unleashed, and it's up to Stine and the kids to stop them.

At the end of the movie, Slappy, having escaped being sucked in the "Haunted Halloween" book, arrives at Stine's house and sucks Stine inside a magical book that he (Slappy) wrote.

Stine in this movie is much more jovial, mellow and friendly, reflecting how the events of the first movie changed him for the better. 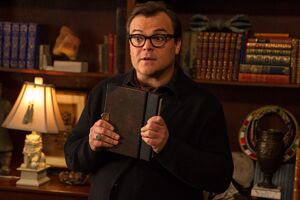 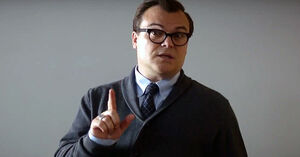 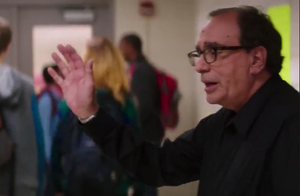 The Real R.L. Stine as Mr. Black the Drama Teacher.