Rabbit is the father of Lucy, Peter and Emily, the neighbour and enemy of Wolf and the main protagonist of the 2001-2002 British-Canadian TV series Don't Eat the Neighbours.

He is voiced by Robert Lindsay (who is known for his roles in Citizen Smith and My Family).

Rabbit lives in England with his daughters Lucy and Emily and son Peter, whom Rabbit has raise single-handedly after his wife was eaten by a wolf. He is best friends with Terrapin and will go and steal cabbages for his family to eat.

However, Rabbit's life turns upside down when he meets his new neighbour Wolf, who has moved to England with his sons Simon and Barry after they were banished from Canada by The Brotherhood of Wolves. Throughout the series, Rabbit has to avoid becoming food for Wolf and his friend Fox (the latter of whom Rabbit has been long time enemies with). He is dismayed when Lucy befriends Simon and Barry. 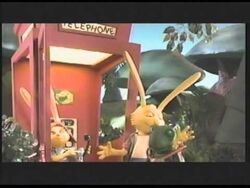 Rabbit with his daughter Lucy and friend Terrapin

Rabbit with his neighbour and enemy Wolf 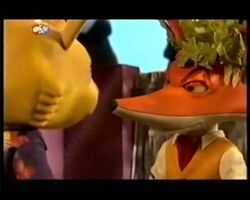 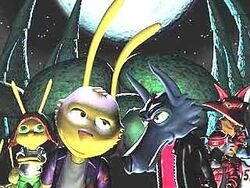 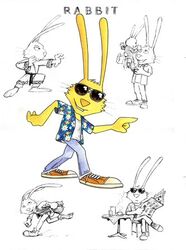 Rabbit and his daughter Lucy 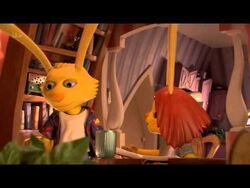 Add a photo to this gallery
Retrieved from "https://hero.fandom.com/wiki/Rabbit_(Don%27t_Eat_the_Neighbours)?oldid=1638942"
Community content is available under CC-BY-SA unless otherwise noted.