Mayor of the Hundred Acre Wood

To tend to his garden.

Fatherly Heroic Jerk
Rabbit is a supporting character of the Winnie the Pooh franchise. He is a responsible rabbit in the fictional world of the book series and cartoons. He is a good friend of Pooh. He is always practical and keeps his friends on their toes, although they sometimes raise his ire unintentionally.

He is one of the main characters in The Many Adventures of Winnie the Pooh, The Tigger Movie, Springtime with Roo, and Pooh's Heffalump Movie, a supporting character in Piglet's Big Movie, Winnie the Pooh (2011), My Friends Tigger and Pooh, and as a major character in Christopher Robin (2018).

From 1966-1977, he was voiced by the late Junius Matthews, who also voiced Scottie the Terrier in 101 Dalmatians and Archimedes the Owl in The Sword in the Stone. After Matthews’ death, Rabbit was later voiced by the late Ray Erlenborn in 1981, the late Will Ryan from 1983-1986, and the late Ken Sansom from 1988-2010. Since 2011, he is currently voiced by Tom Kenny, who also voiced Spongebob Squarepants (with the exception of Christopher Robin (2018) in which he is voiced by Peter Capaldi).

He means well, but is commonly ticked off with Tigger when he destroys his garden. Rabbit is a character that enjoys being alone, but also wants his way with most things.

While most of the cast in the books are based on stuffed animals owned by Christopher Robin Milne, Ernest H. Shepard's illustrations of Rabbit look more like a living animal. Rabbit resembles a typical rabbit, except that he walks on two legs and uses his front paws as hands. The top of his head reaches about to Pooh's nose.

Rabbit lives in a house in the north-central part of the Hundred Acre Wood, between the sandy pit where Roo plays and the area where the animals he calls his "Friends-and-Relations" live. Rabbit likes to take charge and come up with elaborate plans, such as the one to scare Kanga by hiding Roo, and the one to "unbounce" Tigger. He is also an organizer, as in the case of the Search for Small. As detailed as his plans are, they often miss certain key points and go wrong.

Rabbit tends to include Pooh and Piglet in his plans, and he goes to Owl when there is "thinking to be done". He likes to be put in charge of things and is sometimes bossy, and he sees his relationship to Christopher Robin as being the one that Christopher depends on. While loyal to the friends he knows, Rabbit shows a certain reluctance to welcome newcomers, as evidenced by his initial negative reaction to the arrival of Kanga and Roo in the first book, and to Tigger in the second book. Nonetheless, he warms up to all of them in time.

While the literacy (or lack thereof) of Pooh, Owl, and Eeyore becomes a plot point in The House at Pooh Corner, Rabbit's ease with reading and writing is taken for granted.

Rabbit also has good relationships with the minor animals in the forest, known as "Rabbit's Friends-and-Relations". Several are mentioned by name, including beetles called Small, Alexander Beetle and Henry Rush, and three unspecified creatures called Smallest-of-All, Late, and Early. According to the illustrations of the book, his Friends-and-Relations include other rabbits, a squirrel, a hedgehog, mice, and insects. At one point, Rabbit estimates that he would need "seventeen pockets" if he were going to carry all his family about with him. Whether that number refers just to his relatives or to the friends-and-relations as a group is unknown, if it had any basis at all.

In Return to the Hundred Acre Wood, Rabbit tries to organize things further. He tries to have a census in the forest, but it does not work out very well. Rabbit also attempts to teach a Household Management class and is the one who discovers Lottie the otter. His grandfather, Grandad Buck, appears in the book.

Rabbit appears in most Disney Winnie the Pooh cartoons, but he is yellow instead of brown. As an addition to his character, he keeps a garden and does whatever he can to protect it from other animals such as bugs and crows. He gets upset when anyone or anything tries to steal his vegetables or damages his garden. His garden is never mentioned in the books until Return to the Hundred Acre Wood.

The Disney adaptations also develop his personality further. In addition to wanting to be organized and practical, Rabbit is a control freak who puts himself in charge of things, orders others around and insists on doing things exactly right, in his way and in the proper order. He also has a short temper that was not in the books and can act mean or callous to others, although not intentionally. Deep down, he is very good at heart and cares a lot about his friends.

Rabbit likes to do things by the book. In Pooh's Grand Adventure: The Search for Christopher Robin, he always lets the printed word tell him what to do. He eventually admits that it is because he believes that cannot think well enough for himself. He proves himself wrong when he comes up with an original plan. Despite doing wrong at times, he always learns his lesson. In Springtime with Roo, Rabbit has a leading role and discovers a possible future where everyone, tired of Rabbit's selfishness, will leave the forest and he will be alone. Back in the present, he sets things right.

In the Disney adaptations, Rabbit and Tigger are usually foils for each other. In the original featurettes, Rabbit outright dislikes Tigger. By The New Adventures of Winnie the Pooh, however, they have become close friends, though very dysfunctional ones, who regularly work together. Tigger's antics continue to annoy Rabbit and make trouble for him, while Rabbit's harsh attitude and attempts to teach Tigger a lesson still come off as unkind. Nevertheless, Tigger is usually the first one to help Rabbit when he needs it and Rabbit cannot deny their closeness.

His character is consistent in most of the Disney adaptations, although in Welcome to Pooh Corner, he is a talented magician and in The New Adventures of Winnie the Pooh, he is pale green instead of yellow. At one point in the latter series, Rabbit adopts a bluebird named Kessie. As of 2004, Rabbit now appears at Walt Disney World in Lake Buena Vista, FL and Disneyland in Anaheim, CA for meet and greets.

Junius Matthews was the voice of Rabbit in the first three Disney films. After his death, Ray Erlenborn briefly voiced him in Winnie the Pooh Discovers the Seasons. Will Ryan took over the role for Winnie the Pooh and a Day for Eeyore and performed both Rabbit and Tigger in Welcome to Pooh Corner.

Ken Sansom replaced Ryan beginning with The New Adventures of Winnie the Pooh and is to date Rabbit's longest-running portrayer, having continued the voice up to and including My Friends Tigger and Pooh. Tom Kenny most recently provided the voice for the 2011 film, Winnie the Pooh as Ken Sansom died prior to the film's release.

In the live action 2018 film Christopher Robin, Rabbit will be voiced by Scottish actor Peter Capaldi (who also portrayed The Twelfth Doctor). 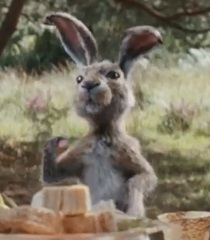 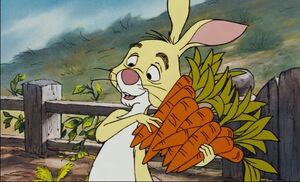 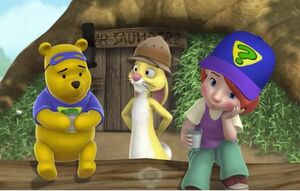 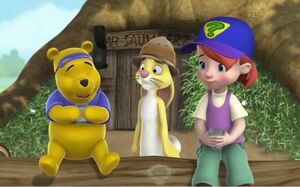