Romeo-Kilo
Guardian Angel
Survivor (by The Player, simulation only)

Rachel Kane is an American CIA agent from Call of Duty: Black Ops III. She took care of The Player and Jacob Hendricks in the CIA agency. She has brown hair and brown eyes, like Ilona. Also like Ilona, she knew the deep, dark secret of the villains of the game.

She was voiced by Rachel Kimsey, who also voiced Wonder Woman in Justice League Action and Scooby-Doo and Guess Who? and portrayed Zoe in Don't Look Under the Bed.

Rachel is a C.I.A. agent assigned to be the liaison officer between the agency and Hendricks and the Player, Kane is first encountered in Singapore while the team is investigating why a C.I.A. safehouse went dark. Hendricks mistrusts her from the beginning, while the Player is willing to put more faith in her. When it becomes clear that Taylor's team is responsible for the murders at the safehouse, Hendricks, Kane and the Player form an uneasy alliance to track him and his targets down.

Rachel Kane worked with John Taylor and Jacob Hendricks in Singapore, to investigate a CIA black station that had gone dark. Upon investigating the black station, they found the staff slaughtered and was completely ransacked. Kane determined that the last Winslow Accord operatives to report there was Dylan Stone and his team, which consisted of Alice Conrad, Joseph Fierro, and Javier Ramirez. In addition, she noticed that the station's data drives were gone, which contained top secret information regarding covert CIA operations around the globe.

Upon discovering that some of the data was with the 54 Immortals, Kane sent Taylor and Hendricks to retrieve from the Goh siblings. The mission was successful despite the death of Goh Min and the operatives maiming Goh Xiulan, and the two uncovered security footage of Stone and his team killing the black station's staff. After that mission, Kane sent Taylor and Hendricks to the abandoned Coalescence facility at the center of the quarantine zone where an alert signal was released.

At the facility, Hendricks and Taylor discovered an abandoned CIA black project named SP/CORVUS. The project had involuntary human test subjects, which was linked to the disaster that caused the deaths of 300,00 people. At this point, Stone had inadvertently stumbled upon the project, and had been marked for assassination by the CIA to cover it up. In the server rooms, Taylor and Hendricks apprehended Ramirez, who was in the process of leaking the information to the Winslow Accord's enemies.

The two questioned him, and learned that Stone had bargained his way out of Singapore to Egypt to find Dr. Yousef Salim, who was involved in the black project. Ramirez was executed by Hendricks before 54 Immortals reinforcements arrived and flooded the facility. Ramirez succeeded in releasing the information, which revealed Kane's location where the 54 Immortals attacked her location. Kane was captured by Goh Xiulan, who used her as a bait to coax Taylor and Hendricks to rescue her. Taylor killed Xiulan and saved Kane, and the group traveled to Egypt to stop Stone.

Since Winslow Accord's communication channels had been compromised by the leaks, Kane was unable to get further assistance on the mission. Kane used her alliance with the Egyptian Army to call in a favor: Place Dr. Salim under custody to question him and avoid being captured by Stone. Kane met with Lieutenant Zeyad Khalil, who had secured Salim, and in return, she promised to support the Egyptian Army against the Nile River Coalition. The NRC attacked shortly afterward, with Stone having made them his allies by leaking intelligence of the Egyptian Army's weak points.

Kane assisted Taylor and Hendricks from Ramses Station before realizing that Stone orchestrated the NRC's assault in order to distract her. Stone succeeded in kidnapping Stone during the attack, but Taylor placed a tracking device on Salim, ensuring his movements could be tracked. The team followed Stone to Kebechet, who were too late to save Dr. Salim who was executed, but they managed to captured Conrad. During the interrogation, Conrad revealed that Stone had intended to find and kidnap Sebastian Krueger, the director of SP/Corvus, and that Stone and Fierro were using the aquifers as their base of operations. After getting all of the information, Taylor executed her.

With the full support of the Egyptian Army, Kane, Taylor, and Hendricks assaulted the NRC aquifers and trapped Fierro inside, but couldn't capture Stone. Upon trying to reach Fierro, Taylor nearly drowned, but Kane saved her, and both of them admitted their feelings for each other. Despite these feelings, Hendricks accused Kane of manipulating him and threatened to kill her, and later filed a report against Taylor, critical of relationship with Kane.

Kane hatched a plan to assist Khalil in inspiring a civilian uprising, and to attack Stone's location at the lotus towers. Thought the plan succeeded, Khalil was captured in the battle, and Taylor was crippled by Stone, and Hendricks killed Dylan.

The operation was a success, and the evidence that Stone leaked were brushed off as a propaganda exercise. Taylor was offered a chance to continue serving the Winslow Accord if he joined Project Prometheus, which would give him cybernetic augmentations and a neural interface. Kane was unable to accept Taylor's choice and broke off her relationship with him and returned to the CIA. Despite the end of the relationship, Taylor kept her scarf around his arm as a memento of their relationship.

A year later, Taylor had succumbed to the DNI virus caused a failed interface, with Corvus gaining control and manipulated him into searching an simulation of his own memories. Kane diagnosed the problem, and was able to explain how Corvus worked: he would spread to whoever used their neural interface on someone who is infected, or into the system he was his the abandoned Coalescence facility.

Corvus had placed The Player into the simulation, with him taking the place of Taylor, and made Taylor's team the rogue operatives. Taylor's teammates, Sarah Hall, Sebastian Diaz, and Peter Maretti died as a result of the infection, but Taylor managed to resist Corvus' control before being "killed" in the simulation. Additionally, Kane played the same role that she did in reality, with her now supporting The Player and Hendricks on their missions. While in reality, Hendricks launched a terrorist attack on the Coalescence headquarters after having enough of the advanced technology that had driven Taylor insane.

Kane and the Player-controlled Taylor attempted to stop Hendricks, who was controlled by Corvus. Going into the facility, the discovered Nova 6 research, and Kane detected a containment leak and attempted to stabilize the leak. However, it turned out that Corvus was in control of the system, and tricked her into entering the Nova 6 storage room to kill her.

Corvus released the gas, while the Player watched from the other side, unable to do anything. Kane warned the Player that Corvus can manipulate people, something he kept in mind when he entered the Frozen Forest. The Player was able to prevent Corvus from manipulating him, and the virus attempted to exploit Kane's love to Taylor, telling him that she didn't have a DNI, she was gone forever. Taylor and the Player worked together to resist the virus, which culminated in the Player purging their neural interface free of Corvus, and possibly wiping all of Taylor's memories of Kane. 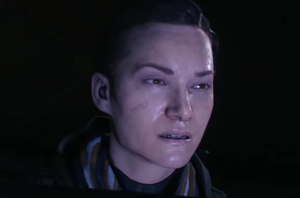 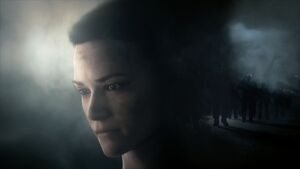 Kane in the opening cinematic of "Vengeance". 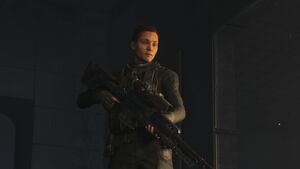 Kane after killing a warlord, meeting up with Taylor (reality)/Player (simulation) and Hendricks. 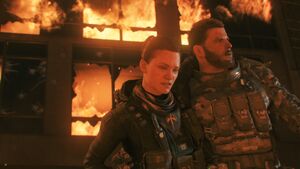 Kane being saved by the Player from Goh Xiulan. 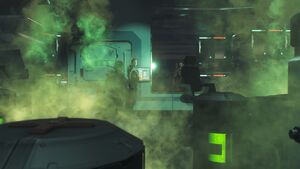 Kane realizing that Corvus is in control of the contamination leak, and is locked in with the Nova 6 storage. 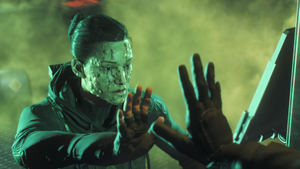 Kane dying from Nova 6, warning the Player to not listen to Corvus. 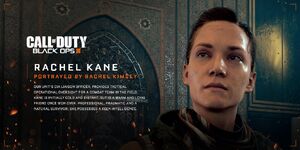