Slaking up
Talking with his muscles

He was voiced by Ian Jones-Quartey, who also voiced Wallow from Bravest Warriors.

In the episode "We've Got Fleas" Rad is turned into a were-cat after being bit by Crinkly Wrinkly. He became a cat because, according to himself, he's so clean (but it could really be because of his sensitive and loving feelings). Getting this form, Rad obtains cat-like abilities and particularities, like doing high jumps and getting curiosity. His strength and speed are assumed to increase as well. He can deliver a special move called Cat Scratch Fever, which is a powerful scratch delivered with his claws. 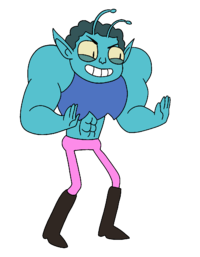 Power Poke
Add a photo to this gallery

Retrieved from "https://hero.fandom.com/wiki/Radicles?oldid=1903003"
Community content is available under CC-BY-SA unless otherwise noted.