Rafe is a character from the seventh Pokémon Movie: Destiny Deoxys. He is the older brother of Audrey and Kathryn.

He is voiced by Kenji Nojima in the Japanese version, and by Sebastain Arcelus in the English version.

Rafe is a calm and collected young man who thinks before he acts. He is protective of his sisters and cares for his Pokémon and friends. He can become cocky or condescending after a victory as seen when he defeated Ash and Tory.

When Deoxys' clones began abducting people and Pokémon, Rafe was able to fend off the clones that came near his group with the help of his Blaziken, Ash, and Pikachu. Later, Rafe helped free the abducted citizens of LaRousse City. He also worked to restore energy to regenerate the body of the other Deoxys. 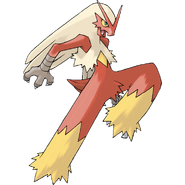 Blaziken
Add a photo to this gallery

Retrieved from "https://hero.fandom.com/wiki/Rafe?oldid=2213195"
Community content is available under CC-BY-SA unless otherwise noted.