Middle School: The Worst Years of My Life

Get revenge on Principal Dwight for destroying his notebook by breaking all the rules in the code of conduct, avoid getting sent to military school, expose Bear to his mother Jules, expose Principal Dwight and get him fired by stopping the B.L.A.A.R. (all succeeded)

Rafe Khatchadorian is the protagonist of the 2016 Lionsgate movie Middle School: The Worst Years of My Life. He is an incredibly talented artist who lives with his single mother, Jules, his younger sister, Georgia and his dog, Calvin. He also had a younger brother named Leo who died of cancer, so he often imagines that he is still alive and around.

He is played by Griffin Gluck.

Rafe Khatchadorian is a new student at Hills Village Middle School, (after being transffered from other different schools he was kicked out of) his mother Jules reminds Rafe that there is a bigger world out there than in his notebook, and his sister Georgia (who is very smart mouthed for her age and can drive without being taught) tells Rafe if he gets kicked out he could end up in a new school called "Prison Elementary School". When Rafe arrives at his new school he meets the principal of the school, who criticises Rafe for breaking the dress code and he is surprised that Rafe does not know the rules which are known as the Code of Conduct, so he hands Rafe a copy and introduces himself as Principal Ken Dwight. Rafe enters the school where he meets up with his friend Leo, who, like Rafe, agrees that the school is like a prison. Rafe runs into Vice Principal Ida Stricker, who is Dwight's accomplice who makes sure all the students are obeying the Code of Conduct, not loitering in the halls, and ruthlessly tells Rafe to get to class. Rafe meets Mr. Teller, a nice and comedic teacher who befriends Rafe and lets him know that Dwight's rules do not exist in his classroom.

Rafe meets Miller the school bully who makes fun of his last name and threatens to beat him up, and as a assembly comes about a upcoming test called the B.L.A.A.R, a student named Jeanne Galleta gives a speech about the rules of this school and then Dwight shuts her speech down. Rafe is the only person who applauded her (he 'falls in love' with her during her speech). Rafe then starts to draw an insulting picture of Dwight as a zombie in his notebook and one of the students grabs Rafe's notebook and then the other students are laughing at the drawing and then Stricker makes one of them hand over the notebook and she shows Dwight the drawing who then says the assembly is concluded. Back in his office Dwight shows Rafe rule #26, where any written material that is inappropriate will be confiscated and destroyed, then Dwight calls in Janitor Gus with a yellow bucket full of acid which Dwight is going to destroy Rafe's notebook with. Rafe begs Dwight not to destroy his notebook because the contents mean everything to him, then Dwight tells Rafe that creativity does not belong in his school, so he tosses his notebook in the bucket full of acid and ruthlessly tells Rafe that rules are rules. After school, Rafe is heartbroken from the loss of his notebook, and then his mom's selfish boyfriend Carl (whom he nicknames Bear) comes to pick him up. As Rafe gets home Leo gives him a new notebook and a card which he says Rafe should not read, Leo tells Rafe that since Dwight trashed his book he should trash his by breaking every rule in the code of conduct, at first Rafe thought that would be a bad idea but Leo says they are going to break them stealthily with out anyone finding out. Rafe and Leo call their plan R.A.F.E (Rules Aren't For Everyone).

The next morning with eight weeks until the B.L.A.A.R, Rafe sneaks back into his house after covering the inside of the school's halls in sticky notes and it made the students loiter in the halls which was rule #11. Back at home Rafe is angry about having so many jerks ruining his life until Leo notices that earlier Carl accidentally put his credit card number on a napkin, which means they can buy equipment for R.A.F.E. Jeanne is thrilled that someone is standing up to the establishment and Leo tells Rafe they should not reveal himself just yet. Meanwhile, ever since Rafe started breaking the rules the students started slacking off and the test scores started going down, leaving Dwight worried since the B.L.A.A.R. was around the corner and he could not have low test scores so he tries to find the culprit to stop the slacking off. With nothing working Dwight gets another idea, he noticed that the slackers are from Mr Teller's room, and that if he cut that class from taking the B.L.A.A.R then the test scores would be high enough fo the B.L.A.A.R. So he orders Janitor Gus to fill the students lockers with the stuff Rafe was using to break the rules and then frames the students and punishes them with suspension. Mr Teller tells Dwight that the students in his class are not responsable and that it seemed like a set up. But Dwight then accuses Mr Teller of being involved with the pranks, and then fires him. Rafe then decides to come clean, he tells Dwight that he was the one breaking the rules, but Dwight did not care about Rafe's confession and he propositions Rafe that he could be the only kid not suspened if he keeps quiet about it. Rafe then refuses the offer and breaks another rule by setting off a false fire which activates the sprinklers, Dwight then yells that Rafe is expelled. Back at home Rafe tells Jules about Dwight, but she could not do anything about it since it was too late. Jules then tells him that Carl found a military school that she was relucantly going to ship him to since there was nothing left to do, and it is revealed that Leo was Rafe's brother who died two years prior to the film.

Jeanne arives at Rafe's house with evidence that proves Dwight's actions and with Georgia and Mr Teller's class along with Gus and Miller agree to help Rafe take down Dwight. With the kids gone Jules is outraged at Carl for caring more about his lost car than Rafe and Georgia being lost so she leaves to go find them. Back at the school Rafe then tells the other students about Dwight's tactics and then Gus shows up in a cart and Rafe drives off with him with the evidence, Dwight then confiscates a bike and chaces after them, Gus then dumps a pile of manure on Dwight. Mr Teller shows up with Superintendent Hwang in which they all reveal to her Dwight's actions. Hwang fires both Dwight and Stricker for creating unlawful rules, rigging the B.L.A.A.R and unlawfully firing Mr Teller. Rafe is then re-enrolled into Hills Village Middle School and is praised as a hero while Mr Teller is re-hired.

Rafe is later seen that night outside the school conversing with Leo; the latter tells him that, since Rafe has now made friends with some of his classmates, he is no longer needed to fill that void. As Leo departs on a spaceship with extraterrestrials Rafe has created in his earlier sketchbook, Rafe and Jeanne share a kiss, breaking rule number 86, which is the final rule Rafe needed to break for an ends justify the means deed. 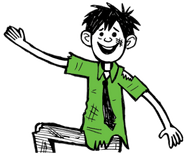 Rafe in the novel the movie was based off of.

Rafe revealing Principal Dwight's true tactics to the students with evidence.
Add a photo to this gallery

Retrieved from "https://hero.fandom.com/wiki/Rafe_Khatchadorian?oldid=1836869"
Community content is available under CC-BY-SA unless otherwise noted.