NOTE: This article is about the incarnation of Rafiki from the 2019 movie. The mainstream version can be found here: Rafiki (Disney).

Rafiki is a supporting character of the 2019 film The Lion King, a remake of the 1994 animated classic film. He is based on his original incarnation of the same name.

He is voiced by John Kani, who also portrayed King T'Chaka in Captain America: Civil War, and Black Panther.

At Pride Rock, Rafiki arrives at Pride Rock for the presentation of King Mufasa and Queen Sarabi's newborn son Simba. Rafiki greets Mufasa by touching his forehead. He thens goes over to Sarabi, who is cradling Simba in her arms. Rafiki then splits apart some roots and uses the powder from them to make a marking on Simba's forehead. Rafiki then picks up Simba and carries him to the peak of Pride Rock before raising him high in the air for te animals of the Pride Lands to see.

After the ceremony, Rafiki draws a painting of Simba on his tree.

Months later, Mufasa and supposedly Simba perish in a wildebeest stampede. Following this, Mufasa's brother Scar becomes the king and permits the hyenas to take over the kingdom. Rafiki and Zazu watch from a distance in disappointment.

Years after, a piece of mane reaches Rafiki’s tree. He examines it and realises that it is from Simba. Happy to discover that the prince is alive, Rafiki journeys to the jungle, where he finds Simba displeased about the prospect of heading back home. Rafiki reveals that he knew Mufasa, and implores Simba to follow him in order to see him again.

Rafiki leads Simba on a chase through the jungle until they reach a pool. He instructs Simba to look at his reflection. Though at first skeptical, Simba does so and sees Mufasa’s face in the water. He encounters the spirit of his father, after which he agrees to head home. Rafiki celebrates the choice as Simba runs off.

Later, during the battle at Pride Rock, Rafiki uses his staff to fend off the hyenas and protect Zazu from them. After the pride achieves victory, Rafiki watches Simba ascend Pride Rock.

Months later, he presents Simba and Nala’s cub to the Pride Lands. 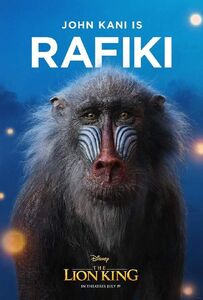 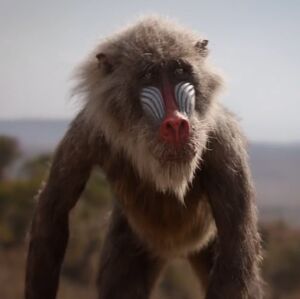