Help Simba return home and reclaim his birthright as king.

Get Kiara and Kovu together to stop the war between the Pride Landers and the Outsiders.
Encourage Timon to look beyond what he sees.
Mentor Makini (all succeeded).

His physical appearance combines features of both hamadryas baboons and the mandrill.

Rafiki is aloof, hard-working, loyal, quirky, but wise and independent. He has a very spiritual worldview and is very experienced at magic. He regularly holds ceremonies and is an old friend to Simba's bloodline. He comes off as silly, childish and irritating at first, but can offer great moral support when necessary. Being a baboon, Rafiki is also no pushover, and if the situation warrants it, he can become a deadly and formidable opponent, easily beating up much larger enemies.

Rafiki is first seen arriving at Pride Rock for the presentation of King Mufasa and Queen Sarabi's newborn son Simba. Rafiki approaches Mufasa and shares a hug with him before going to Sarabi, who is cradling Simba in her arms. Rafiki then anoints Simba by cracking open a fruit and using its juice to make a marking on the young prince's forehead. Rafiki then sprinkles dust over Simba before picking him up and going towards the edge of Pride Rock and raises the cub towards the sky for the animals of the Pride Lands to see.

Rafiki is later seen one rainy night in his tree painting a picture of Simba.

A few months later, Rafiki is saddened to hear that Mufasa and Simba had perished in a wildebeest stampede. Mufasa's younger brother Scar takes over as king and allows hyenas to live in the Pride Lands. Rafiki returns to his tree and weeps at the loss of his dear friend and the young prince before wiping out Simba's painting.

Some years later, Rafiki is sitting on the top of his tree and catches petals floating around in the air and notices a strange scent coming from them. Rafiki then takes the petals inside the tree to study them more. Rafiki then realizes that the scent belongs to Simba. Overjoyed to hear the prince is alive, Rafiki restores the painting and paints on a mane before declaring that it is time.

Rafiki travels to the outskirts of the jungle and finds Simba and annoys him with riddles. However, when Rafiki calls him Mufasa's boy, Simba follows him in surprise that he knew his father. Rafiki corrects Simba, saying that he "knows" his father. Simba replies that Mufasa died a long time ago, but Rafiki replies that Mufasa is alive and beckons Simba to follow him. They reach a lake where Rafiki tells Simba to look into it. However, when Simba says that it is only his reflection there, Rafiki tells him to look harder. Just then, Simba's reflection turns into Mufasa's, to which Rafiki says that Mufasa lives in Simba before Mufasa's ghost arrives and urges Simba to return to the Pride Lands and become king. After Mufasa's ghost leaves, Simba expresses worries over facing his past, which makes Rafiki hit him on the head with his staff. When asked by Simba why he did that, Rafiki replies that it does not matter as it's in the past. Simba replies that it still hurts, to which Rafiki says that the past can hurt, but the way he sees it, you can run from or learn from it. Rafiki then attempts to it Simba on the head again, but this time, Simba moves out of the way, proving Rafiki's point. Rafiki then asks Simba what he's going to do, to which Simba playfully takes Rafiki's staff before dropping it and returning to the Pride Lands. The next day, Simba's childhood friend and love Nala asks Simba's friends Timon and Pumbaa where Simba is, before Rafiki arrives and tells them that the king has returned, making Nala realize that Simba has gone back to defeat Scar and become king.

Rafiki is later seen taking part in the battle of Pride Rock where he comes to Simba's aid when the lion is attacked by hyenas, giving Simba time to escape and confront Scar (who had confessed to killing Mufasa).

After Scar's defeat and death, Rafiki signals to Simba to go to the edge of Pride Rock to finally reclaim his title as king. Simba hugs Rafiki, who replies that it is time and watches the young lion roar in victory.

Sometime later, Rafiki is last seen presenting the newborn cub of King Simba and Queen Nala to the animals of the Pride Lands.

Rafiki is first seen at the start of the film presenting Kiara to the animals of the Pride Lands and also to Mufasa's ghost. Timon and Pumbaa watch on and believe that Kiara is a boy, before being corrected by Rafiki.

A few years later, Rafiki is seen in his tree talking to Mufasa whilst painting a picture of Kiara next to Kovu, a young Outsider lion being raised to avenge Scar's death by killing Simba. Rafiki expresses worry about Kovu being raised by his mother Zira to have hate in his heart. Mufasa via blowing a fruit down and cracking it, tells Rafiki that Kiara and Kovu are be brought together in order to bring peace between Simba's pride and the Outsiders. At first, Rafiki is against the idea but is eventually coaxed into going with the plan by Mufasa.

Sometime later, Rafiki is seen at Pride Rock watching Kiara prepare to go on her first hunt. After Kiara is rescued from a fire in the Pride Lands by Kovu, Simba and Nala arrive on the scene and are informed by Rafiki that Kovu saved Kiara. The following night, after Kiara and Kovu go stargazing, Rafiki arrives that takes them to a place called Upendi, where the two young lions begin to fall in love.

The next day however, Simba and Kovu walk into an ambush set up by Zira and the Outsiders. Simba manages to escape, but banishes Kovu from the Pride Lands after believing that he was involved in the ambush, despite Kovu's pleas that he had nothing to do with it. Rafiki watches on as Kovu leaves the Pride Lands, saddened at Simba for not believing Kovu and for unknowingly ruining Mufasa's plan.

However, after Kiara and Kovu stop a fight between their prides (with the exception of Zira, who dies trying to kill Simba), Simba admits his wrongdoing and allows Kovu and the remaining Outsiders to return to the pride. Rafiki is last seen blessing the union of Kiara and Kovu at their wedding, happy that Mufasa's plan worked.

Rafiki is first seen appearing in front of Timon (who had recently left his meerkat colony) and asking where he is going. Timon replies that he wants to live in a carefree place where he doesn't have to hide or worry, to which Rafiki tells him about Hakuna Matata and says that to find it, he must look beyond what he sees.

A few months later, Rafiki talks with Timon's mother Ma about Timon going by Hakuna Matata. Ma gets annoyed at Rafiki for using a metaphor on Timon, saying that he takes things literally. Concerned about her son, Ma enlists Uncle Max to go with her to find Timon. Rafiki tells Ma that the journey of a thousand miles begins with the first step. Ma sarcastically thanks Rafiki, before jumping on Rafiki's foot.

Rafiki is next seen a few years later coming to Timon in the jungle after Simba and Pumbaa leave to go to the Pride Lands to fight Scar. Timon guesses what Rafiki is going to say to him and decides to go after his friends.

Rafiki is last seen arriving in the movie theatre that Timon and Pumbaa are watching the film in to watch it again with Simba, Ma, Uncle Max and several other Disney characters.

The Lion King's Timon and Pumbaa

Rafiki appears as a recurring character in the 1995 to 1999 series where he is shown to have a nephew named Nefu.

Rafiki appears in the stage adaptation of the film. Unlike previous versions of the character, this version of Rafiki is female. This is because it was felt that the story lacked a strong female character.

The Lion Guard: Return of The Roar

Rafiki appears as a supporting character in this 2015 television film, which takes place in the middle of The Lion King II: Simba's Pride.

He is first seen in his tree as Simba's son Kion and his best friend Bunga run past whilst playing baobab ball. Later that day, Rafiki is at Pride Rock with Simba and Nala as they hear Kion roaring (which he was doing to save Bunga from two hyenas named Cheezi and Chungu). Rafiki knows that the Roar Kion did was The Roar of the Elders and declares that it is time. Whilst Simba is reluctant about Kion's destiny, Nala is more accepting and tells Simba to listen to Rafiki. Kion and Bunga return to Pride Rock where Rafiki and Simba take them to a hidden part of Pride Rock called The Lair of The Lion Guard and tell them about The Lion Guard, who are a team led by the second-born child of the Pride Lands monarchy that protects the Pride Lands and defends the Circle of Life. They also talk about the previous Lion Guard which was led by Scar, who like Kion, also had the Roar of the Elders. However, the power went to Scar's head and made him think that he should be king instead of Mufasa. When the rest of the Lion Guard refused to help Scar with his plan, he destroyed them with the Roar, which led to him losing it as it was not meant to be used for evil. This makes Kion vow not to end up like Scar.

Rafiki is later seen with Simba, Nala, Kiara and her friend Tiifu watching Kion and his Lion Guard (Bunga, Fuli, Beshte and Ono) defeat Janja and his hyena clan.

Rafiki appears as a recurring character in this series, which takes place after the television film.

Since the second series special "The Rise of Scar", Rafiki has an apprentice named Makini, who in the show's third and final season, becomes the Royal Mjuzi of The Tree of Life under the reign of Kion and Rani. 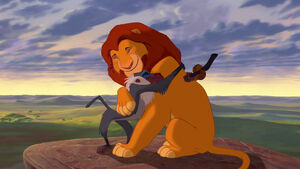 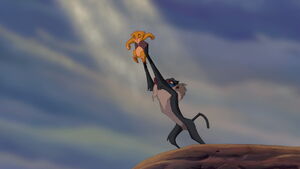 Raffia holding out baby Samba for all to see. 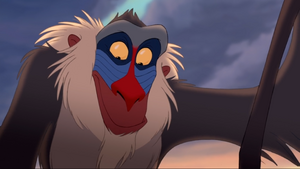 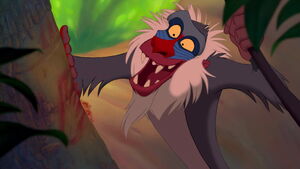 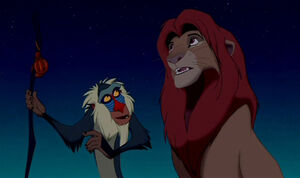 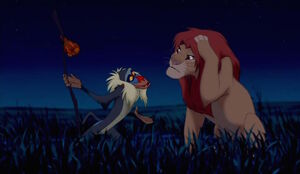 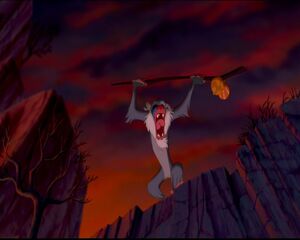 Rafiki's war cry after striking the hyena who is attacking Simba. 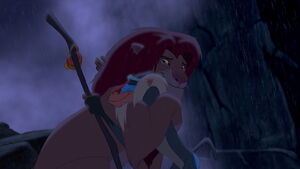 "It is time."
Add a photo to this gallery 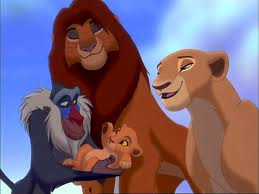 Rafiki about to present baby Kiara. 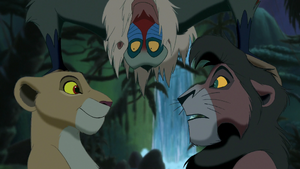 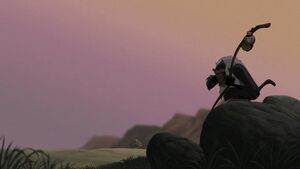 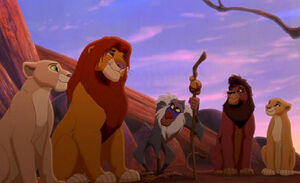 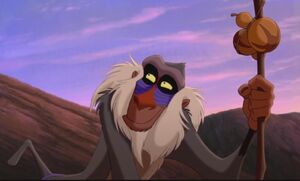 Rafiki happy that Mufasa's plan for the Pridelanders and Outsiders to reconcile worked.
Add a photo to this gallery 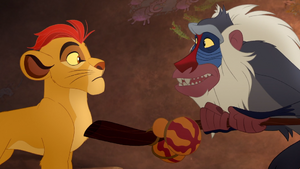 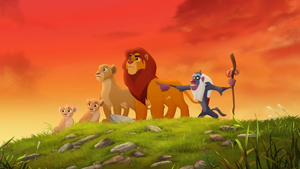 Rafiki with Simba, Nala, Kiara and Tiifu
Add a photo to this gallery 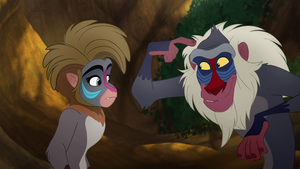 Rafiki with his apprentice Makini 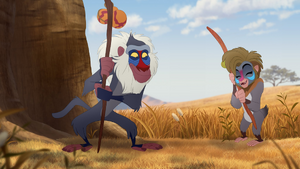 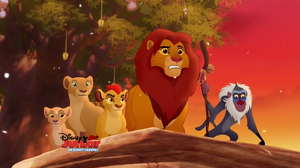 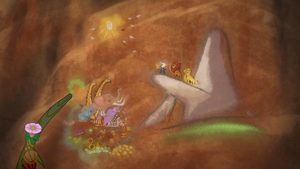 Painting of Mufasa, Sarabi, Simba and Rafiki at Simba's presentation.
Add a photo to this gallery

Retrieved from "https://hero.fandom.com/wiki/Rafiki_(Disney)?oldid=2005675"
Community content is available under CC-BY-SA unless otherwise noted.