Being on the battlefield.
Watching movies.
Being with his wife and son.

He is a Liberian-American special forces soldier responsible for resolving the 2009 Big Shell Incident as a new recruit to the reformed FOXHOUND unit. A former child soldier under Solidus Snake, Raiden had been selected by the Patriots to test the S3 Plan at the Big Shell. He later worked alongside the Paradise Lost Army in their anti-Patriot activities, but was captured and forced to undergo heavy cybernetic experimentation. After successfully escaping, Raiden went on to assist Solid Snake during Liquid Ocelot's Insurrection. He later joined the PMSC Maverick as a means to support his family, but re-entered the battlefield once more after Desperado ruined one of their missions, leaving him injured.

After which he became a cyborg, determined in bringing down Desperado, including quitting Maverick especially after they discovered that they were using the same AI training program on kidnapped children, like the one that was used on him in Liberia. Over the course of his quest, Raiden slowly begins to embrace his war criminal side, "Jack the Ripper" and becomes emotionally unstable and quite frankly, sadistic.

He was voiced by Quinton Flynn, who voices Silver the Hedgehog in the Sonic the Hedgehog series, and also voiced Mickey Mouse in Mickey Mouse Works, Elmer Fudd and Swiper the Fox in Robot Chicken, Snowbell in the Stuart Little animated series, Timon in Timon and Pumbaa, Marcus Damon in Digimon Data Squad, Iruka Umino in Naruto and Naruto: Shippuden, Axel in the Kingdom Hearts series, Meriadoc Brandybuck in The Lord of the Rings: The Fellowship of the Ring: The Video Game, and Spider-Man in Marvel: Ultimate Alliance.

In Japanese, he was voiced by Ken'yū Horiuchi, who also voiced Barazō Mankanshoku in Kill la Kill, Toki in Fist of the North Star, Yahiko in Naruto, Professor Oak in Pokémon, Ogma in Beastars, XR in Buzz Lightyear of Star Command, and Mr. Whiskers in Brandy & Mr. Whiskers.

The child that would be known as Jack was born in Liberia in 1983 to unnamed parents, and they were later killed by a clone of Big Boss - Soldus Snake. The man then decided to adopt the child and turn him into a chil soldier, having him become a member of the small boy unit of the Army of the Devil. Fighting in the Liberian Civil War, Jack become a dreaded leader of the small boy unit, gaining the nickname "Jack the Ripper" and "White Devil". Though trained with rifles, Jack was taught by Solidus the art of blades, considering them more of a noble weapon than guns. Once the war had ended, Jack was placed in a relief center by Solidus, but he was removed and taken to the United States to be palced in foster care.

In the states, Jack was found by the Patriots, whom placed nanomachines in his brain to have him function, and also to manipulate his memories when necessary. Despite forgetting most of his memories of his time as a child soldier, Jack would suffer from nightmares about the events. Once he reached adulthood, Jack joined the United States military, and his skills were noticed by the U.S. Army's Task Force XXI around the mid-2000s. In New York, he would soon meet a woman named Rosemary, and the two began a relationship despite Jack being emotionally distant from her.

Unbeknownst to Jack, Rosemary was a spy for the Patriots who was assigned by the group to enter a relatinship with him to keep an eye on the soldier. During his time, Jack would become a member of FOXHOUND<, special unit that was supposedly reformed following the Shadow Moses incident.

Two years after the tanker incident in which the USS Discovery sinked and Solid Snake was believed dead, Jack was assigned to infilitrate the Big Shell facility to learn why it was constructed. Given the codename "Raiden" despite being briefly nicknamed "Snake", Jack sneaked into the facility and realized that there was another intruder who had entered Big Shell. Raiden would then meet Iroquois Pliskin, and managed to stop the destruction of Big Shell by Fatman, whom had set C4 across the facility. During the mission, Raiden would encounter Solidus, whom informed the agent that Pliskin was actually Solid Snake. Raiden continued on his mission, and eventually learned that the Big Shell was actually a disguse for the Patriots' Arsenal Gear.

After learning of the gear's development, Raiden then rescued Emma Emmerich, a computer engineer who had designed the Arsenal Gear's AI. Despite trying to take Emma to saftey from the facility, they were attacked by Dead Cell member Vamp, who proceeded to kill Emmerich. He then would encounter Snake, and helped him stop Dead Cell and infect GW, arsenal's AI with a virus to prevent its development from being completed. Once it was done, Raiden was seemingly betrayed by Snake and handed over to Olga Gurlukovich, but later learned it was a ruse so Snake could sneak on board. Meeting up with Snake after being freed by Olga, Rosemary contacted him and admitted that not only she was pregnant with his child, but she was also a spy to the Patriots, much to his anger. Despite his feelings on the matter, Raiden became suspicious of the Colonel's behavior, and had Hal "Otacon" Emmerich to investigate him. Otacon would reveal that the Colonel was an AI formed by the GW, Raiden started to question was Rose even real herself.

After the gear crashed in Manhattan, Raiden battled his adoptive father and managed to stop him from obtaining the data from his cerebral cortex. During the battle, Raiden lamented that he was disgusted by the Patriots, and that he wouldn't be controlled by anyonce once Solidus was defeated. Once Solidus was dealt with, Raiden briefly reunited with Solid Snake, and consoled with Rosemary, managing to forgive her.

Though Raiden and Rose decided to stay together, he started to suffer from nightmares once again, and decided to leave from her after he was falsely informed that she suffered from a miscarriage. Afterward, Raiden came into contact with EVA (now known as "Big Mama"), giving her the location of Big Boss in exchange for information on Olga's daughter. With the help of Big Mama and the Paradise Lost Army, Jack then traveled to Area 51 and managed to rescue Olga's daughter Sunny. Raiden would then give Sunny to Solid Snake and Octacon after deciding to wander across the Earth, as he previously learned of Rose's marriage to Roy Campbell. Once he completed his journey, Raiden returned to help the Paradise Lost Army to find the remains of Big Boss, but he was captured by the Patriots.

Raiden was experimented on by the Patriots, being a test subject of project on exoskeleton enhacnements, thus giving him a cyborg body. He later managed to escape with the help of the Paradise Lost Army, and succeed in finding Big Boss' remains after being freed from the Patriots' nanomachines. Despite completing his mission, Raiden realized he couldn't have a normal life from his cybernetic enhancements, and decided to disappear.

When Raiden learned of Solid Snake's operation to stop Liquid Ocelot, he came back on the radar to warn his ally of ambush by the PMC. When Snake asked for Raiden's help to locate Naomi Hunter, he used his hunting skilsl to find her, and protected them from several Gekkos during their escape. When Vamp arrived to kill Raiden, he managed to defeat his opponnent before jumping on Snake's and Naomi's helicopter.

Despite suffering from critical injuries, Raiden recovered and traveled to Shadows Moses to help Solid Snake defeat the Patriots. Raiden battled Vamp once again and emerged victorious, and was given some advice by Solid Snake, who told the young soldier to not follow the same path he did.

Following the defeat of Liquid Ocelot, Raiden was hospitalized and was given a new body that had artificial skin, allowing him to appear more human. He would reunite with Rose and their son Jack, revealing that her marriage to Campbell was a ploy to prevent Raiden from having to serve the Patriots via leverage. Forgiving Rose, Raiden happily embraced his wife and son, being assured by his lover that he was no beast.

Raiden appears in Super Smash Bros. Brawl as a sticker that increases the direct attacks to any character.

Raiden returns in Super Smash Bros. Ultimate as a legendary-ranked primary attack-type spirit which only can be summoned using the cores of Solidus Snake, Rosemary, any 3 attack cores, and one neutra core. 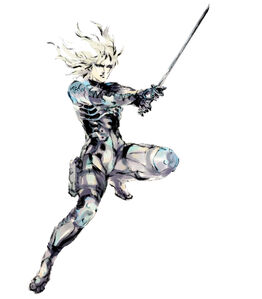 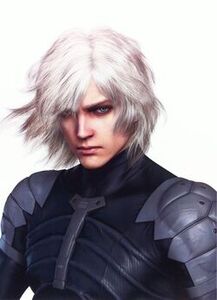 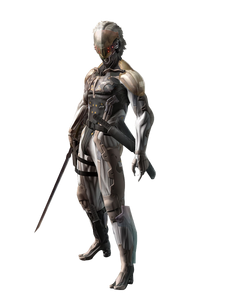 Raiden in Metal Gear Solid 4, with his visor up. 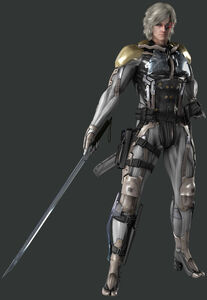 Raiden before receiving his new augments. 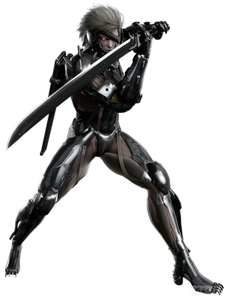 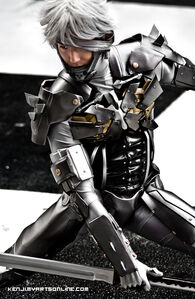 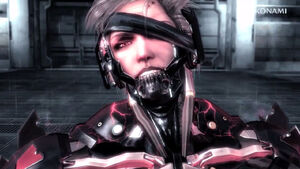 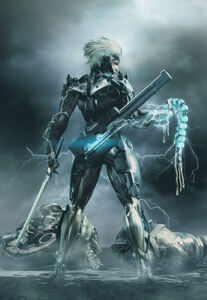 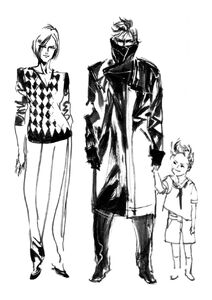 Artwork of Raiden with Rose and their son.